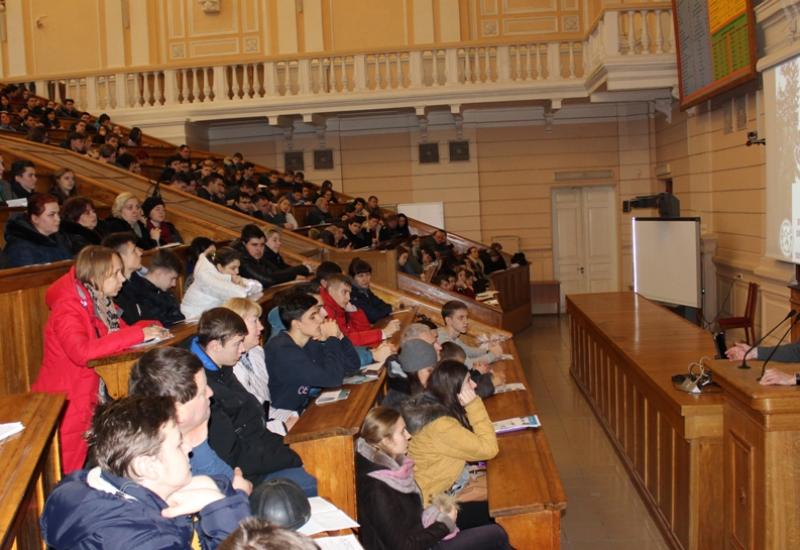 From the very morning future entrants and their parents filled the building number 1 of the National Technical University of Ukraine "Igor Sikorsky Kyiv Polytechnic Institute". They came to the university to learn about its faculties and institutes as well as the peculiarities of the upcoming admission campaign.

In the hall of the building faculties and departments of the KPI installed their information desks, so that visitors were able to come up and talk with heads and teachers of the departments and get answers to questions about training directions, practice and internships, employment opportunities for the chosen specialty, etc. They could also get different printed materials or even take a tour around the University and the State Polytechnic Museum.

However, most information was waiting for them on the meetings in the Big Physical Audience, which were opened by their first vice-rector of the Igor Sikorsky KPI, Academician of the National Academy of Sciences of Ukraine Yuriy Yakimenko. He spoke about the history and traditions of the university, about the features of learning in it and the prospects that will open up to those who decide to acquire higher education here. Well, of course, the requirements for them. He also spoke about the unique opportunities for a comprehensive mastering of the chosen specialty and the acquisition of the skills necessary for self-realization in the modern world, which the university provides to all its students.

Radmila Segol, the Deputy Secretary-General of the Admissions Committee of the University told about the terms of admission. Consequently, in 2018, each entrant will be able to submit 7 applications for a state-commissioned place for 4 specialties. Given the fact that Igor Sikorsky KPI trains specialists in 42 specialties and 191 specialties in 25 faculties and institutes — the choice is extraordinary. Radmila Segol also told about the accession calendar: for the submission of documents and prioritization two weeks are given; the beginning of the registration of the entry cabinets — June 29, the beginning of the reception of documents — on July 12, on August 1 will be published lists recommended for enrollment on the order, August 6 — the deadline for accepting the original documents, August 7 — an order for enrollment under the state order will be issued, August 18 — enrollment for training under the contract will be issued. She told about the peculiarities of admission to various specialties and informed that full information about the conditions of admission will be placed on the website of the Admission Commission of the University (http://pk.kpi.ua/) and on its pages in social networks.

Valery Mozharovsky, Vice-Chairman of the Admissions Committee, complemented her story. He dwelt on certain questions of the procedure for admission to the university and answered the questions of future entrants and their parents.
The next to the guests of the university was the head of the military training department Colonel Reserve Oleksii Tsarenok. He told about how in Igor Sikorsky KPI can get a military specialty and become an officer of the reserve, as well as about the directions in which the training is being conducted at the department.

The last on the rostrum of the Great Physical Audience was the head of the direction of profession-diagnostics of the Kiev Youth Center Mykola Nesterenko. His speech concerned modern methods of professional orientation. He, in particular, informed future entrants about the methods of conducting vocational guidance tests and on modern psychodiagnostic approaches in determining the suitability of young people for work in one or another specialty. Finally Mykola Nesterenko offered to those who want to do such remote testing free of charge on the site "My career" (http://mycareer.org.ua) with the following recommendations from the specialists of the Center.

The Day of Open Doors was completed directly at the departments of the University.

In the photo: before the future entrants and their parents, the first pro-rector of the Igor Sikorsky KPI, the Academician of the National Academy of Sciences of Ukraine Yuriy Yakimenko