"OSA" invites to communicate. You should not be afraid 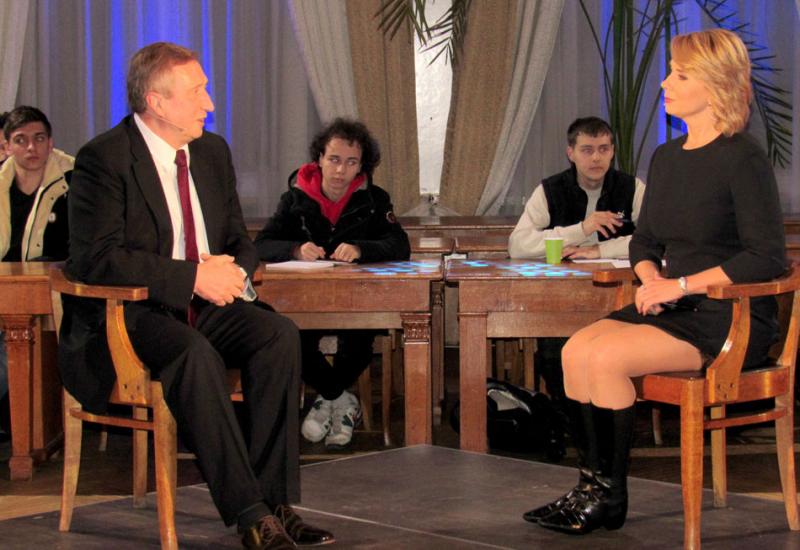 The guest of the first meeting of the intellectual club "OSA", which took place in the Scientific and Technical Library of the Igor Sikorsky Kyiv Polytechnic Institute on November 14, was the rector of the University Mikhailo Zgurovsky.

In the reading room number 12, where the actions and events organized by the library usually take place, was created a real television studio, in the middle of which were located the leading session Natalia Semenchenko and her guest on the podium lit by the soffits. Therefore, the meeting with the rector was held as a television talk show and his entries are already set out on the Internet.

Actually, it is in this format that meetings of the club will take place, which will be moderated by Professor of the Department of Theoretical and Applied Economics at the Faculty of Management and Marketing, and also an economic expert, blogger, publicist and well-known TV presenter Natalia Semenchenko. She is the inspirer of this project, which, perhaps, will be released on big TV screens, because the guests of the club should be very famous and even iconic for our country - scientists, statesmen, legislators, diplomats, artists - that is, those people who influence on how Ukraine lives today and what it will be tomorrow, and not only in the economic sense.

That is the conversation with the rector during the meeting concerned not only the university problems. They talked about the fate and prospects of education in our country; on the advantages and disadvantages of the current system of admission to universities on the results of UPE; on what achievements of Soviet education should not be abandoned, and modern educational technologies should be adopted; which, in the opinion of Mikhailo Zgurovsky, should be the lecturer of the future university, and what - the student; about the need to replace the usual two-pole design of the activities of Ukrainian universities "education-science" on the model "education-science-innovation"; on the teaching of the economy in Ukrainian universities and, in the end, on the need to reform the content of education and how to implement it without destroying the system of training qualified specialists. It is worth noting that the meeting did not boil down to a dialogue between the host and the guest. Participation in it was received also by spectators - students, lecturers and employees of the KPI them. Igor Sikorsky and other Kiev universities. And, of course, it was not just about general issues of education and economics, but also about the problems of purely university education. In particular, about the projects of the Kiev polytechnics, who won the city program "Participation budget" and their support from the administration of the university; about the competition of start-ups within the framework of the festival "Sikorsky Challenge", the annual growth of the number of developments supported by investors, and specific projects that have achieved success thanks to the victory in it. It was not without specific issues, for example, the creation of an educational television studio at the Department of sound engineering and registration of information at the Faculty of Electronics, the construction of new hostels and others. The dialogue, or rather the polylogue was so interesting for the participants, even went beyond the stated timeframe. However, readers can see and hear for themselves what was discussed during the meeting, if they go to the page of the club "OSA" on YouTube.

By the way, about the name. At the end of the meeting, I asked the presenter what was behind it.

"OSA" is an abbreviation from the Russian "Open Student Association" or English Open Student Association, abbreviated also "OSA", - Natalia Semenchenko said. - So the symbol of our club is a wasp. But this is not a symbol of aggression, even intellectual. The wasp never stings without a reason. But if you hurt her, then, feeling the smell of alarm pheromone, the targets of the squadron of other people will fly to her defense. In addition, wasps are extremely important for maintaining the natural balance. Their food is harmful insects. Therefore, if there were no wasps, we would not know where to go from spiders, various beetles and gnats. In addition, wasps are real workers: they build amazing nests, desperately protect them, and in case of damage they are able to restore them throughout the day. There are other interesting features, but I think that's enough. That is why we decided with the students that the name and image of the wasp completely meet the goals and ambitions of our intellectual club. Our goal is to unite young intellectuals from the student (and not only) environment, expand the horizons of their ideas about the world around them by communicating with the brightest representatives of modern science, business, government and other leaders of thought. "

The club "OSA" will meet every Thursday. Information about his regular guests is to be announced in advance. Recordings of meetings are laid out on YouTube, and in the future, perhaps, will be broadcasted on one of the Ukrainian TV channels. Everyone who is interested is invited. So, watch the announcements.