Youth forum “The space and future”: presentations, round table etc. 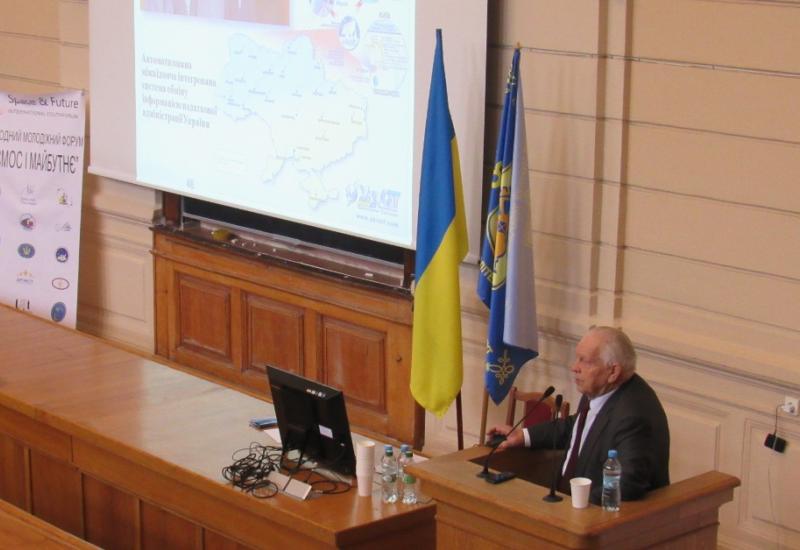 On October, 4, the KPI hosted the events, which were organized in scopes of the agenda of the second day of the International Youth Forum “Space and Future”.

The forum began on October, 3 with a solemn opening ceremony in the Kyiv city state administration. According to the organizers’ statement, in preparing their program they sought to arrange discussion of a new paradigm of space research and applied projects based on the idea that it is Space that may become an integration platform for the future. The Forum was also oriented on providing a platform for cooperation, exchange of knowledge, experience, ideas and technologies for international experts in the field of space science and industry, as well as related industries, and the involvement of international youth in the development of elements of the new paradigm. Therefore, participation was undertaken by representatives of not only Ukraine but also other countries. And the promotion of its implementation was provided by those interested in the projects of the future members of the Club of Rome, the heads of space companies, leading physicists, economists, psychologists and investors.

The events at the KPI were held in the format of presentations and during three panel sections: Space Future of Ukraine, Future of the Environment, Future of Humanity and Round Table. The round table was devoted to the 60 th anniversary of the launch of the first artificial satellite of the Earth. In addition, on the second day, the first Space hackaton in the world took place, where young enthusiasts worked in the Commands of the Future. They developed research and applied project proposals, building on the ideas expressed by the speakers. The best proposals on the last day of the Forum will be selected to attract their support from patrons and sponsors with the view of possible implementation.

The first meeting in the historic Large Physical Auditorium of the Building No. 1 of the University was opened by the presentation “Aerospace Education in Ukraine”. It was performed by the Executive Director of the Ukrainian Youth Aerospace Association “Suzirya” Sergiy Yatskov. Therefore, subsequent reports-presentations (on the activities of schools and higher education institutions in this area) were a clear illustration of how the idea of such education is realized. Special attention of the participants in this context was attracted by the speech of the vice-rector for scientific work of the KPI, academician of the National Academy of Sciences of Ukraine Myhailo Ilchenko, who presented the Space Program of the University and described in detail the first domestic nanosatellites “PolyITAN-1” and “PolyITAN-2- SAU” developed by the Kiev polytechnics, and today overcome the new and new thousands of kilometers in the para- Earth orbit, and about the spacecraft and projects that are currently in operation.

The reports, presented by the adviser of the head of the State Space Agency of Ukraine Eduard Kuznetsov and representatives of the State Enterprise “SE “Pivdenne” within the framework of the presentation “Modern space capabilities of Ukraine” were extremely interesting. They were devoted not only to the general issues of the Ukrainian space industry, but also to the very specific problems that Ukrainian scientists and engineers are currently working on – the prospects for propulsion systems for missiles, rocket and space complexes, new materials and technologies used in the creation of missile-space technology, etc.

The “Future of the Environment” panel highlighted the issues of ecological challenges, which should find adequate answers from humanity, Ukraine’s place in the global agenda and results of scientific experiments on the South Pole.

Work of the thematic panel “The Future of Humanity” was devoted to the forecasts of the development of civilization, communities of the future, transformational practices, i.e., scientific predictions and foreshadowing

Perhaps one of the key events of the Forum was the round table “The Beginning of the Space Ag”. It was dedicated to launching from the Baikonur cosmodrome of the first artificial satellite of the Earth. This remarkable event took place on October, 4, sixty years ago. To a certain extent, it is symbolic that this round table was held at the KPI, a research university, whose students, teachers and scientists have developed the first Ukrainian nanosatellites. The active participants of the round table were the first cosmonaut of independent Ukraine, Hero of Ukraine Leonid Kadenyuk, Advisor to the Chairman of the DSAU, famous specialist in the aerospace industry Eduard Kuznetsov, chairman of the Interregional Organization of Veterans of the Strategic Missile Forces, Major General Mykola Filatov, the Head of UMACO “Suzirya” , People’s Deputy of Ukraine of two calls Oleg Petrov, Head of the Laboratory of Nano-Satellite Technologies of the KPI Boris Rassamakin, veterans of the cosmodrome Baikonur, Kapustyn Yar, Plesetsk, RVSP etc. And, of course, among the participants were the students of the KPI, student youth, cadets and members of UMACO “Suzirya”.

The events of the third and final day of the International Youth Forum “Space and Future” will be held on October, 5, in the Kyiv planetarium. There will be a presentation of Leonid Kadenuk’s “Missiya – Kosmos” book, presentations of project proposals from teams participating in Kosmohackaton, and awarding the best of them, creative master classes and many other interesting events..

On the photo: Vice-rector on the scientific work of the KPI, academician of the National Academy of Sciences of Ukraine Myhailo Ilchenko is announcing the opening speech