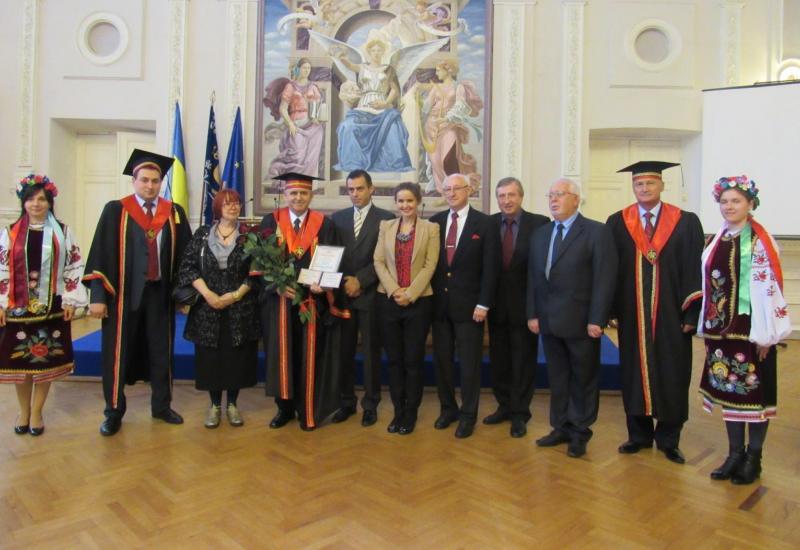 On October, 2, in the Hall of Meetings of the Academic Council of the KPI was held a solemn ceremony of awarding the diploma “Honorary Doctor of the National Technical University of Ukraine “Igor Sikorsky Kyiv Polytechnic Institute”, a mantle and an honorary badge for the well-known Polish public and state figure, founder and president of the Polish Educational Foundation “Perspektywy “, a true friend of Ukraine, Valdemar Siwinski.

The story about his way of life and the achievements was presented during the ceremony by the rector of the KPI, academician of the National Academy of Sciences of Ukraine Michael Zgurovskyi.

Waldemar Siwinski is a graduate of the Warsaw Polytechnic. He currently occupies the position of Vice-President of the International Expert Ranking Group for Universities (IREG) and a member of the Board of the Association for Academic Cooperation in Brussels. As a volunteer Waldemar Siwinski took part in the eradication of the consequences of the Chernobyl accident. Today he is a well-known journalist and even was the head of the Polish Media Conference for a certain period of time. For many years, he headed the publishing house Perspektywy Press, which specializes in education development issues.

Headed by Waldemar Siwinski, the Polish Educational Foundation “Perspektywy” is a member of the Interuniversity Cooperation Agreement in the field of Sustainable Development. This agreement notes the special role of universities in shaping sustainable development policies and joint activities in this area, as well as the need to persistently invite the governments of the Republic of Poland and Ukraine to use the results of sustainable development research for development management at different levels (countries, regions, territories), to intensify academic exchanges between the universities of the Republic of Poland and Ukraine, to concentrate efforts on the preparation of a new generation of managers of both countries, to actively introduce new skills and specialization in this field in the university programs.

The collaboration between Waldemar Siwinski and the National Technical University of Ukraine “Igor Sikorsky Kyiv Polytechnic Institute” is constant and very fruitful. He is one of the true locomotives of establishing new KPI business ties with the universities of the Republic of Poland, contributing to the dissemination of information about scholarships and grants from the Polish and EU governments. In 2007, he was one of the sources of the foundation of the Ukrainian-Polish Center of NTUU “KPI”. The Center became the core of establishing and strengthening the links between the scientists, teachers and students of the KPI and their Polish partners both in the field of innovation and technology and in the humanitarian field.

As President of the Perspektywy Foundation, Waldemar Siwinski was a co-organizer of the Ukrainian-Polish Academic Forum (December 10-12, 2009 in Kyiv), the Ukrainian-Polish Forum of the Association of Rectors of Higher Technical Institutions of Ukraine and the Conference of the Rectors of Technical Universities of the Republic of Poland “Technical Education – for Future Europe” held on November, 7, 2014 in Lviv, Ukrainian-Polish Days of Education, Science and Innovations, within the scopes of which the Forum of Rectors of Higher Technical Educational Institutions of Ukraine and the Republic of Poland took place during 5-8 of April of this year.

Also, the Polish Educational Foundation “Perspektywy” provided the KPI with financial support for the construction of a monument to the prominent Polish physicist and chemist at the university, a graduate of the KPI in 1906, to professor Wojciech Swientoslawski, as well as the preparation and publication of a book about him and contributed to the implementation of many other useful projects for higher education institutions of both countries.

Therefore, taking into account the significant personal contribution to development aimed at developing cooperation and deepening mutual understanding between the peoples of the Republic of Poland and Ukraine, cooperation between higher educational institutions of both countries, support for the participation of the KPI in the projects of the European Union and the creation of a positive image of the University in the international academic environment, on May, 15 this year, the Academic Council of the National Technical University of Ukraine “Igor Sikorsky Kyiv Polytechnic Institute” decided to award Waldemar Siwinski the title of Honorary Doctor of the University, whose distinctions were awarded to him on the 2 nd of October.

At the end of the ceremony Waldemar Siwinsky traditionally read the nomination lecture for those who were present. It was devoted to the challenges faced by higher technical educational institutions of Poland and Ukraine today and the reform of the system of higher technical education in accordance with the requirements of time, as well as cooperation between Polish technical universities and the KPI.

On the photo: Waldemar Siwinski with family members and heads of the Polish educational foundation “Perspektywy” and Igor Sikorsky Kyiv Polytechnic Institute KPI after the ceremony of awarding him the honors of the honorary doctor of the KPI