Visit of the delegation of the University of Chanyang 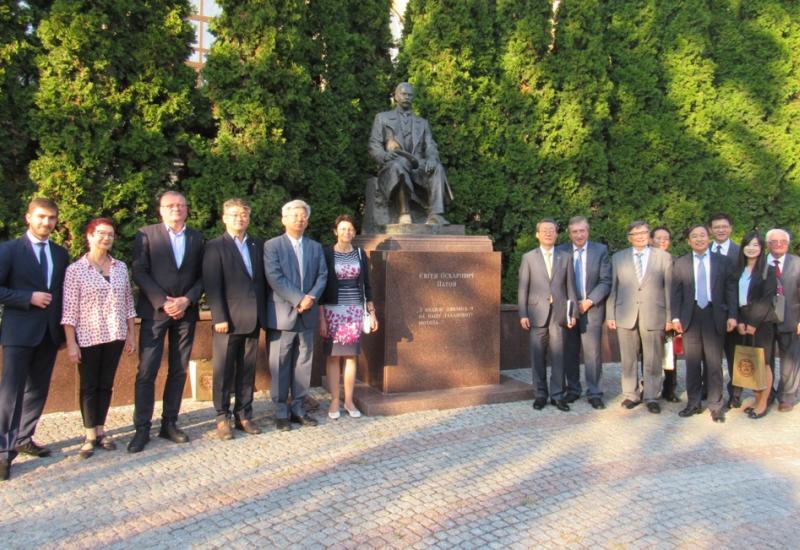 On September 11, 2017, Igor Sikorsky Kyiv Polytechnic Institute was visited by a representative delegation from the University of Chanyang (the Republic of Korea).

It consisted of the heads of the Chanyang University, which are responsible for a number of areas of its work. The delegation was headed by President of the University Young Mu Li. Ambassador Extraordinary and Plenipotentiary of the Republic of Korea Li Yang Gu, Director of the Korean Educational Center in Ukraine Yu Seng Bim and others also have attended the meeting held in the KPI.

Founded in 1939, Chanyang University is one of the most prestigious educational institutions in South Korea. In addition it is one of the largest: more than 34,000 students are currently studying on its two campuses. The University of Changyang is among the top 200 universities in the world according to QS World University Ranking.

The visit of the representatives of higher education of South Korea to the Igor Sikorsky Kyiv Polytechnic Institute is one of the results of the agreements reached between the leaders of the KPI and the representatives of South Korea during the Fifth Economic Forum “Ukraine-Korea”, which was held at the University at the end of July this year. The KPI plans to expand the activities of its Ukrainian-Korean center now: the Ukrainian-Korean Center for Education, Science and Innovation will be established on its basis (incidentally, the ambassador of the Republic of Korea, Li Yang Gu, is one of the initiators of the creation of such a structure. This Center should become a bridge between the two countries to expand bilateral cooperation. Therefore, the visit of the delegation of the University of Changyang is a visit of a powerful potential partner of the new Center.

After getting acquainted with the university campus and the exposition of the State Polytechnic Museum of Ukraine the delegation has met with the KPI authorities. The meeting was attended by the Rector of the University, Academician of the National Academy of Sciences of Ukraine Michael Zgurovsky, Vice-rector on international relations, Corresponding Member of the National Academy of Sciences of Ukraine Serhiy Sidorenko, CEO of the Kyiv Polytechnic Science Park Volodymyr Hnat, Director of the Institute of Postgraduate Education, Inna Malyukova, Head of the Department of Foreign Economic Affairs Andriy Shisholin and others.Ambassador Extraordinary and Plenipotentiary of Ukraine to the Republic of Korea Alexander Gorin with his wife and adviser to the First Vice Prime Minister of Ukraine - Minister of Economic Development and Trade of Ukraine Andriy Biryukov also attended the event.

The presentation of the KPI and the concept of the creation of the Ukrainian-Korean Center for Education Science and Innovation was made by Sergey Sidorenko for the representatives of the Chanyang University. Volodymyr Hnat provided them with information on the Innovation Environment of the KPI “POLYTECO SCIENCE CITY” and the Startup School “Sikorsky Challenge”, as well as the most successful developments of the Kiev Polytechnicians of the last time. In turn, representatives of the University of Changyang showed the participants a video about their institution.

After the exchange of information, there was discussion about the opportunities and the format of cooperation between the two universities. At the end, the participants of the meeting agreed to prepare the text of the memorandum, which shall define the general principles and directions of cooperation, in the remote mode and to sign it in the nearest future. And then the participants plat to start working on the annexes to this document, with the definition of specific conditions and joint projects.

On the photo: participants of the meeting near the monument of Eugene Paton