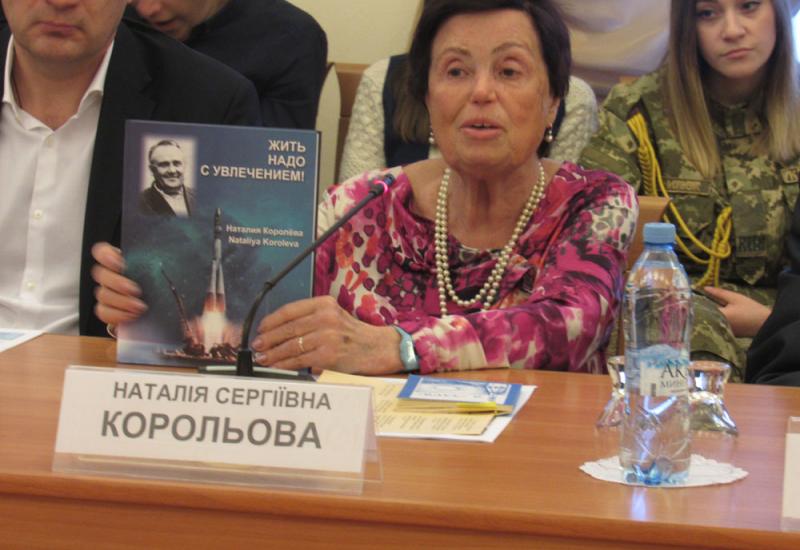 The most expected speech at the meeting of the Round table devoted to 110th anniversary of the birth of the founder of practical space science Sergei Korolev, was certainly the speech of his daughter – Nataliia Sergiivna Koroleva. The meeting took place in Igor Sikorsky KPI, in January, 18.

However, the events on the occasion of 110th anniversary of the birth of prominent designer of rocket and space technology started with putting flowers to his monument on the Alley of prominent students and fellow workers of National technical universities of Ukraine "Igor Sikorsky Kyiv polytechnic institute"

Sergii Pavlovych Koroliov was a student of Mechanical Faculty of KPI in 1924-1926. It was the school of aircraft construction of Kyiv polytechnic that opened him doors. The name of one of the most prominent students is respected greatly here. Memorial board with his profile welcomes students and teaching staff at the entrance of 1st building of Igor Sikorsky KPI. On the second floor you may find memorial room named after Sergii Koroliov where students have lectures; the glorious way of pioneer in aircraft industry is shown in State polytechnic museum at university as a separate exposition. Thus, the anniversary of Sergii Koroliov birth who would have been 110 years old in January, 12 brought together many interesting personalities directly relating to the realization of space programs and projects of former USSR and modern Ukraine, namely managers of enterprises and representatives of aviation and space field, scientists, veterans of Baikonur, Kapustyn Yar, Plesetsk Cosmodromes as well as teaching staff, fellow workers, university and school students – members of Small Academy.

Natalia Koroleva was the first to deliver her speech in front of the audience. She shared her personal memories about her father and episodes of his life that are not even known for researchers of his life and technology historians. She also presented her new book about prominent designer "Live with an interest (the name represents favorite statement of Sergei Pavlovych), published on the occasion of his 110 anniversary in Russian and English languages, his bronze bust and reprint of his book "Rocket flight in stratosphere" that was first published in 1934.

Pilot astronaut, double Hero of the Soviet Union, Oleksandr Aleksandrov (he delivered his speech on "Pilot-control aerospace science after Sergei Pavlovych Korolev", first cosmonaut of independent Ukraine, president of Aerospace Society of Ukraine, Hero of Ukraine, Leonid Kadeniuk (Sergei Korolev – the founder of practical space science) took part in the meeting. The Chairman of the Board of “Meridian” plc. n.a. S. P. Korolev (at present it is the name of the enterprise), Viachyslav Protsenko spoke about the history of giving name of Sergii Korolev to Kyiv plant “Radioprylad”. All those present watched with a great interest a video film by Yaroslav Holovanov and Vladlen Troshkin “Triumph and tragedy of Sergii Korolev”. The meeting participants had also a chance to see photo presentation “Half-century long friendship” prepared by the fellow worker of State polytechnic museum, Liudmyla Bashtova that shows photos of and other materials about connections between university and family members of Sergei Korolev.

“We will always be proud of the fact that Sergii Pavlovych Korolev was a student of KPI and that KPI because of Sergei Koroliov is related to great achievements of humanity, – stressed rector of Igor Sikorsky KPI, Mykhailo Zgurovsky in the end of Round Table meeting. – He was one of the brightest stars in the constellation of designers that studied here”.