The book exhibition "Physics through the ages" 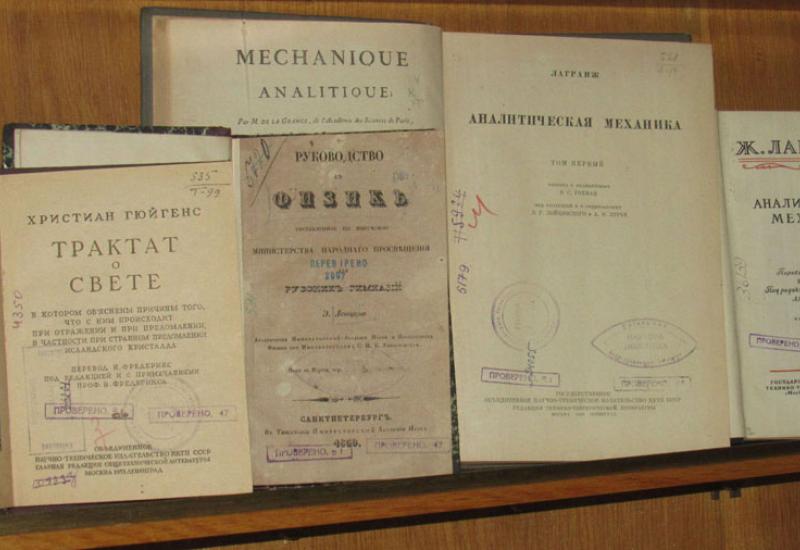 At the beginning of the new school year in the hall of rare and valuable documents of G. I.  Denisenko the Scientific and Technical Library opened the exhibition "Physics through the ages".

There was physic, one of the main disciplines in the KPI, the physical laboratories had the latest equipment, which the first head of the department of physics Professor G. G. de Metz ordered from the best producers in Europe. In the report on the activities of the Institute in 1899 you can read: "Professor G. G. De Metz taught physics at the first and second year students for all branches simultaneously. Moreover, he was reading a course of physical measurements and supervised practical exercises in physics, which were set for students of all four branches. There were installed up to 100 practical works in the physical cabinet of the Institute. Each student was required to perform a certain number of these tasks, which are most suitable for the specialty of the department.

The KPI Library was constantly replenished with diverse literature on physics. At present, many books published in the nineteenth and early twentieth centuries are stored in the room of rare and valuable documents.

The exhibition presents, firstly, the works of the classics of this science: H. Huygens, I. Newton, J. Lagrange, E. Lents, G. Helmholtz. There are also works by Nobel Prize winners in physics: M.Plank, N. Bora, J.Perren, M. Born, and others.

The bulk of the old publications on physics stored in the STL are manuals, lecture courses, materials for practical classes, methodical recommendations in Russian, Polish, German, French and English. There are quite a lot of translations of textbooks known in Europe. For example, the two-volume "Electricity Course" by the French physicist E. Gerard is actually the first practical manual in electrical engineering. We have a Russian translation of the third French edition published in 1893 -1894.

One of the interesting collections of our department is the collection of books by Orest Danilovich Hvolson (1852-1934), the author of the unique "Course of Physics", the first edition of which was first published in 1897, and the seventh - in 1933. The course was translated into German, French and Spanish. In this course the material is presented in great detail. So, the volume devoted to the teaching of heat (4th edition, 1919), has a volume of 830 pages, and published in 1923 two volumes devoted to electrical and magnetic phenomena, have a total volume of 1828 pages. Studying the course of O.D.Hwulson can be very useful for those who want to understand physics (and not just learning how to do some or other calculations).

The periodicals and scientific series are represented by the following publications: "Journal of the Russian Physical and Chemical Society", "Physical Review", "Technical Education", "New Ideas in Physics", " Electrical World", "Journal of Mathematics and Physics".

The exhibition will continue throughout the school year. We invite all those who wish to become acquainted with it and listen to the fascinating story of the unique book editions, which was followed by more than one generation of polytechnics.

Marina Miroshnichenko, head of the Department of rare and valuable documents of  Denisenko STL