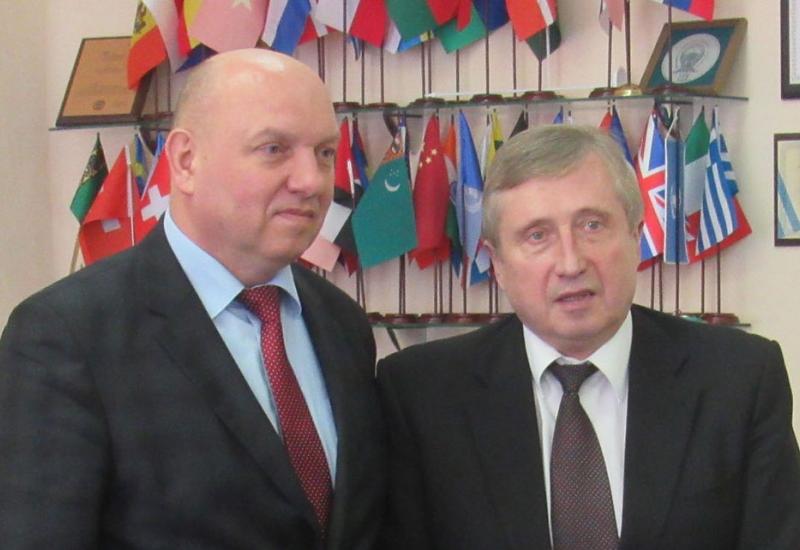 Professor Genrik Sobchuk heads the Representation of the Polish academy of Sciences in Kyiv for several years. And he told about cooperation with NTUU "KPI" to the Kyiv Polytechnic newspaper editorial offices about features of this work.

- From the first days of the work at the Representative office of the Polish academy of Sciences in Kyiv you cooperate with NTUU "KPI". Among priorities of the cooperation there are projects in the field of "green power" and in the sphere of water purification. There are the projects connected first of all with overcoming of environmental problems. Is Representation going to expand scope of joint operations? If yes, in what directions?

- Yes, we plan to hold the IV International conference “Pure Water”, and we plan to hold the next conference on a subject of usage of renewable energy in economics. Both conferences respond to modern scientific trends, including those which are implemented in activities of the Center of Renewable Energy of NTUU "KPI" which was set up with assistance of Embassy of the Republic of Poland in Ukraine.

- There have already held three International scientific and practical conferences "Pure water. Fundamental, applied and industrial aspects" with the assistance of the Polish Academy of Sciences (PAS) in the KPI. Besides the PAS supports the International scientific and practical conference "Renewable power and energy efficiency in the XXI century". How productive, in your opinion, is their work? Results on which scientist`s work were reported at these scientific meetings and are used by the Polish colleagues?

- By the results of work within the conferences that was called by you, more than 10 scientific works were published in authoritative international scientific magazines. Thanks to a personal contact with the Polish researchers who were ready for conferences and several visits of the Ukrainian colleagues to Poland took place. Besides, it was succeeded to conduct joint surveys in these major fields of science. Within begun ​​ cooperation several applications for patents for innovative decisions in the field of water supply and water disposal were submitted, some of them were approved.

- The PAS supports the plans for further conferences?

- Yes, including this year on representation of our Representation, the Polish academy of Sciences allocated funds for carrying out the fourth conference "The clear water". Using own operational means, Representation is going to carry out together with your university, and also to finance some expenses intend to act as the coorganizer of all. NTUU "KPI" is the most important and the most active partner of Representation of the PAS in Kyiv; besides, this cooperation develops the most effectively and most dinamically.

- It is known that Poland opens doors not only for the Ukrainian scientists more widely now, but also for students and graduate students. In what programs, in your opinion, representatives of the KPI could take part in this context?

The scientists from Ukraine are calculated for several programs in Poland, also of ERASMUS + and POLONEZ. These programs provide finding of the scientific researchers conducted in Poland by scholarships of Ukraine. Besides, periodically there are other opportunities connected with projects which are financed by the EU. It is necessary for participation in these programs to adjust scientific cooperation with partners in Poland. My work and in general activity of Representative offices of the Polish academy of Sciences aim first of all at an intencification of scientific cooperation between Poland and Ukraine, particularly because of revival of personal contacts, mutual acquaintance with scientific achievements, creation of the atmosphere of trust and friendship without which further cooperation will be complicated.

- A serious problem for scientists of Ukraine is implementation of the results of their researches in practice, commercialization of the inventions. For overcoming of an abyss between science, production and business in the KPI an ecosystem of "Sikorsky Challenge «was created, festivals of innovations under the same name are held. Are there similar problems in Poland? If yes, are they managed to be overcome? Or is the partnership with NTUU "KPI useful for the PAS in this aspect "?

- The problem of implementation of results of scientific researches in production is also actual for Poland. Recently in Poland there have been created many innovations of the centers which work actively now. The Center of innovations and modern technologies or the Lublin center of a transfer of technologies, functions in Lublin Polytechnic since 2006 and can be an example. In Poland, thanks to active policy of the state in this sphere, many such centers were created. Their purpose – is to promote implementation of results of scientific researches. And a number of the innovations of decisions which were implemented in production became the result of their activities.

The director of Representation of  Poland of academy of Sciences was invited to participation in work of jury which estimated the works provided on competition to Sikorsky Challenge. The idea of tender on presentation of innovative works of young research associates and students deserves distribution.

- NTUU "KPI" is a large higher educational institution; it has considerable achievements in many spheres of science and equipment. Considering that the Horizon of 2020 program is aimed ​​ at the development, all university mostly cannot act as the partner there. Groups of scientists within such structures as department or institute can be partners. The burden of a worth of work lies down on shoulders of certain people from team, however its administrative framework determines structure of the university and they shall work in this sphere. However it is necessary to emphasize that creation and participation in consortium of the project usually begins with joint scientific operation and personal acquaintances on the basis of which the atmosphere of mutual trust and the correct relation of administrations of structures and a management of university in local the initiatives concerning international cooperation is created.