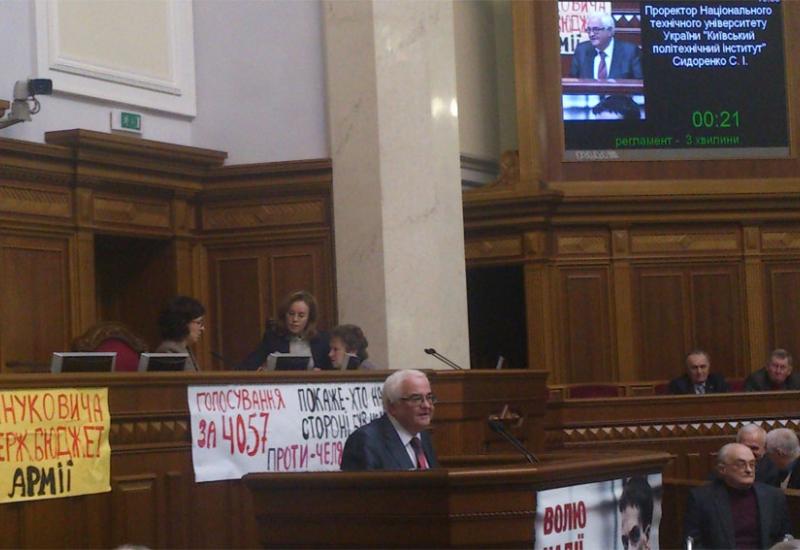 The purpose of the hearings was to discuss a complex of measures aimed at withdrawal of the service of Chornobyl Nuclear Power Station (NPS) and transformation of the 'Envelope' object into ecologically safe system, further social, medical and psychological rehabilitation of affected communities, prevention of repetition of similar catastrophes etc. Thus, except of the deputies the representatives of the central organs of executive branch of Ukraine and local deputies, enterprises' directors that operate in the exclusion area, civil activists that unite all categories of people participating in the catastrophe liquidation works or affected population, scientists who work over the elimination of negative consequences, specialists in the sphere of health care and others took part on the meeting.

Mykola Tomenko, the Head of Committee of Environmental Policy, Management of Nature and Chornobyl Catastrophe Liquidation of Verkhovna Rada, concluded the discussion and offered to elaborate the recommendation project of the Parliament hearings including remarks and proposals that were expressed by the speakers and participants. It should be noticed that proposals were plentiful since over 30 speeches were given at the meeting. Sergii Sydorenko, vice-rector of NTUU 'KPI' on international relations, correspondent-member of the National Academy of Science in Ukraine, also made a report on the topic 'Chornobyl lessons and perspective of creation the educational system of physical nuclear security in Ukraine'. The full text of the report is given below.

One of Chornobyl lessons is that our country has created its own educational background on the secure exploitation of nuclear power stations.

However, as a result of the annexing of AR of Crimea, Ukraine has lost the control over the Sevastopol University of Nuclear Power and Technology. Therefore, it is high time to form educational background in the sphere of physical nuclear security on the modern level of understanding.

All countries pay attention to it. However, it's critically important for Ukraine because the threats of nuclear power industry and its infrastructure have increased

These threats are the following:

Ukraine has all the opportunities to create the system of educational preparation and training of nuclear power security staff.

In April, 2015 the specialists from the Center of studying of non-expansion named after James Martin from Monterrey University of international research with the initiative and support of the Power Engineering Department of the USA did a criteria evaluation of capability of the Ukrainian universities to create the national system of nuclear power specialists' preparation. NTUU 'KPI' was considered to the most appropriate for this.

However, these are some issues still.

Ukrainian legislation doesn't provide norms of some planks concerning nuclear power security. Even official definition of the term doesn't exist. Therefore, it is impossible to elaborate by-laws (regulations). Thus, changes to the legal and regulatory framework should be accepted.

A range of problems on resources for the nuclear power educational program should be solved:

Foreign assistance is necessary as well:

International scientific projects are necessary as well, in the sphere of cyber security, for instance.

The key role will play three-party initiative: Norway – Sweden – Ukraine on the collaboration in the sphere of nuclear (and radiation) security and physical protection, as well as cross-collaboration in nuclear power in Ukraine.

The issues will be observed within the International Forum 'Chornobyl lessons – for the world nuclear security' that will take place on April, 22nd in Kyiv Polytechnic Institute as a big international event according to the event plant of Government Committee devoted to the 30th commemoration of Chornobyl tragedy.

The Forum will impulse the beginning of the discussion of the new international collaboration stage directed to mutual implementation of measures to totally transform 'Envelope' Object into ecologically secure system.

To sum up, many ministries and services of Ukraine, a range of Committees of Verkhovna Rada, universities and wide audience have plentiful crucial issues to solve.

Thank you for your attention!'