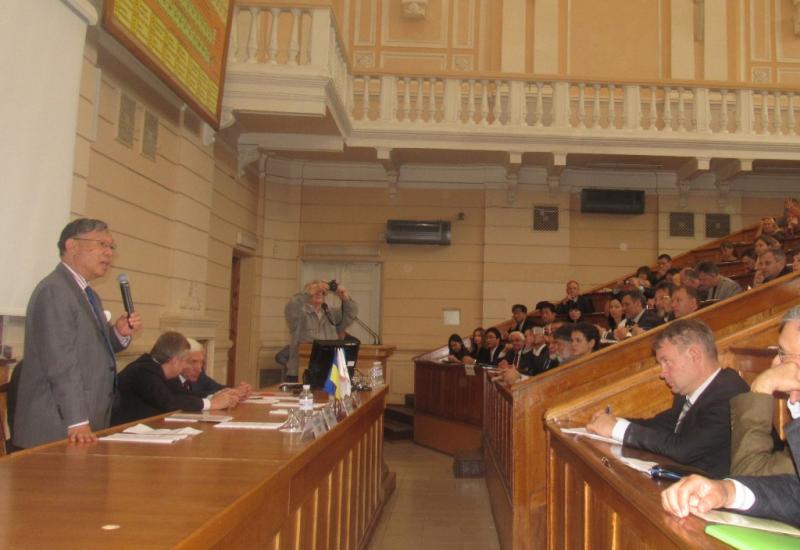 Japan and Ukrainian seminar that took place in NTUU “KPI” in September, 23 was devoted to common scientific research along with Japan and in Japan.

Japanese part was represented by a delegation headed by Extraordinary and Plenipotentiary Ambassador to Ukraine Shigeki Sumi. Director of the department of scientific and technical politics of the Ministry of education, culture, sport, science and technologies in Japan (MEXT) Hirotaka Yamada, director of the department of Japan Society for the Promotion of Science (JSPS) in Bonn city, doctor Keichi Kodaira, director and professor of the Institute for radioactivity of the environment of Fukushima university, doctor Keiji Namba, professor of the department of nanovision technologies of the Higher school of science and technology of Shizuoka University, doctor Toru Aoki, scientists, fellow workers of the Embassy of Japan in Ukraine and others were the part of the delegation.

Deputy minister of education and science of Ukraine, Maksym Strikha, rector of NTUU “KPI”, academician of Ukrainian NAS, Mykhailo Zgurovsky, pro-rector for international relations, correspondent member of Ukrainian NAS, Sergii Sydorenko, deputy pro-rector for international relations, Yevgen Polishchyk. And certainly some representatives of higher educational establishments and scientific establishments from the most part of Ukraine as well as scientists, fellow workers and KPI students took part on behalf of Ukraine.

Mykhalo Zgurovskyi, Shigeki Sumi, Maksym Strikha welcomed participants of the seminar. They outlined the prospect of Ukrainian and Japanese cooperation and determined the main subjects of the seminar as well.

The first session was devoted to the results of Japanese and Ukrainian cooperation in the research area. The director of the department, Hirotaka Yamada informed about the politics of the Ministry of education, culture, sport, science and technologies of Japan in the field of science and technologies; the speech delivered by Doctor Keji Namada related to the cooperation between Chernobyl and Fukushima specialists in the field of agricultural areas recreation; speech delivered by doctor Toru Aoki related to the field of electric engineering and electronics, he spoke about measuring systems for radioactive radiation detection; doctor Noriyuki Kurita, professor of Tojohasiv technical university shared the results of common research in the field of bioinformatics. Kateryna Zelenska, the member of scholarship program of MEXT spoke about the research experience in Japan and opportunities to receive a research grant; Violetta Udovik, a fellow worker of Mitsubishi Corporation, a member of grant program MEXT also spoke about the opportunities to have a grant for internship and scientific research in Japan; Sergii Maulik, head advisor of National scientific and technological association of Ukraine dwelled on the strategic lines of Ukrainian and Japan cooperation in the field of transport, power generation, organic farming, in particular.

The second session of the seminar related to specific mobility programs for Ukrainian and Japan scientists. Doctor Keichi Kodaira informed about the cooperation opportunities between universities, scientific groups, professors, in terms of Japanese Society for Promotion of Science programs. Mr. Hideyuki Tanji, first culture and information secretary of the Embassy of Japan in Ukraine dwelled on Japanese government grants; Mrs. Fumi Sugimoto a fellow worker of the department of international cooperation and international scientific and research activity of the department of scientific and research policy MEXT spoke about the research opportunities in and together with Japan in terms of MEXT program.

The photo of the participants being welcomed by Extraordinary and Plenipotentiary Ambassador to Ukraine Shigeki Sumi.