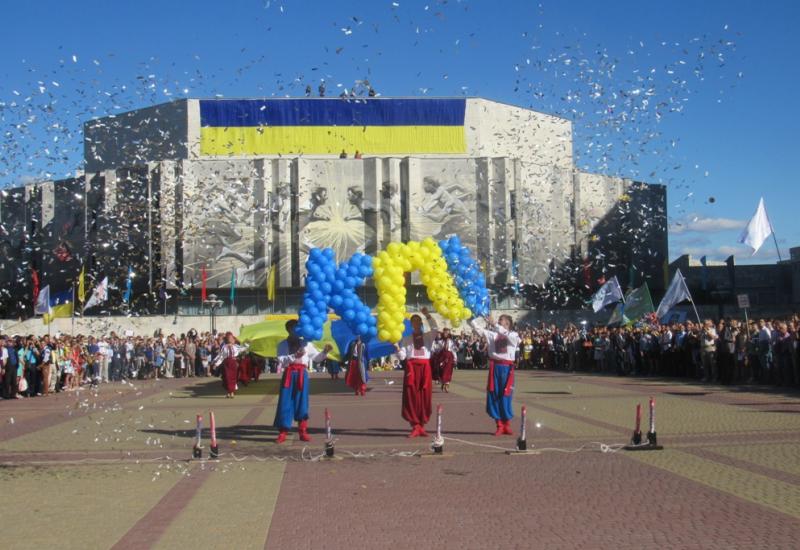 Almost 4 thousand young people from throughout of Ukraine and other countries this year became the members of Kyiv polytechnic family. They will become students of 19 faculties and 7 institutes of the university. On 31th of August they gathered together on the square of Knowledge of the university.

Celebrations started with the performance of honored academic demonstration band of Military forces of Ukraine followed by a moment of silence to honor memory of polytechnics that in our time put their lives for the freedom and independence of our country.

One put flowers to the memorial of the Heroes of the Heavenly Hundred and the monuments to outstanding scientists and designers, whose studying and professional activity were connected with KPI. Rector of university, academician of Ukrainian NAS, Mykhailo Zgurovskyi welcomed first year students with parting words. "I am convinced that you have made the right choice to enter Kyiv polytechnic institute, -stressed rector.-Since there is no alternative to high technological, innovative development of our economy. And you, perspective specialists will be developing this economy, new country, and new society". He wished students of new generation to use new development opportunities that KPI gives to its graduates as well as to be successful on the way they chose.

Demonstration of technical and scientific developments of students and university fellow workers became a part of First year students Day celebration program. It started with the demonstration of two racing bolides "KPI student formula" that took part in international competitions of "Formula SAE" series in Czech Republic (2015) and Hungary (2016). They were designed and constructed by student members of university engineering and sport team. Celebration participants have also seen unmanned aerial vehicles, designed by students of the Faculty of Aviation and Space Systems.

In the end, university sportspeople who won tournaments of different levels, members of KPI Club of the Funny and Inventive and national university collectives of artwork of Center of culture and art as well as winners of "Queen of KPI -2016"contest, Anna Boieva and "Mister of KPI-2015" contest, Dmytro Yurchenko walked in front of novice students, their parents and teaching staff.

In the end, big letters that formed “KPI” soared into the air over the square of Knowledge with great applauses of the audience!

August 31, 2016,  the Day of the freshmen - the traditional National Technical University of Ukraine "Kiev Polytechnic Institute" event, will be celebrated on the Knowledge Sqaure. The program of the festival includes  dedication to students  of 118 set of freshmen; acquaintance with the management, the guests and the best students of the University; performances of art groups of the Center of Culture and Arts.