Meeting with the representatives of business structures 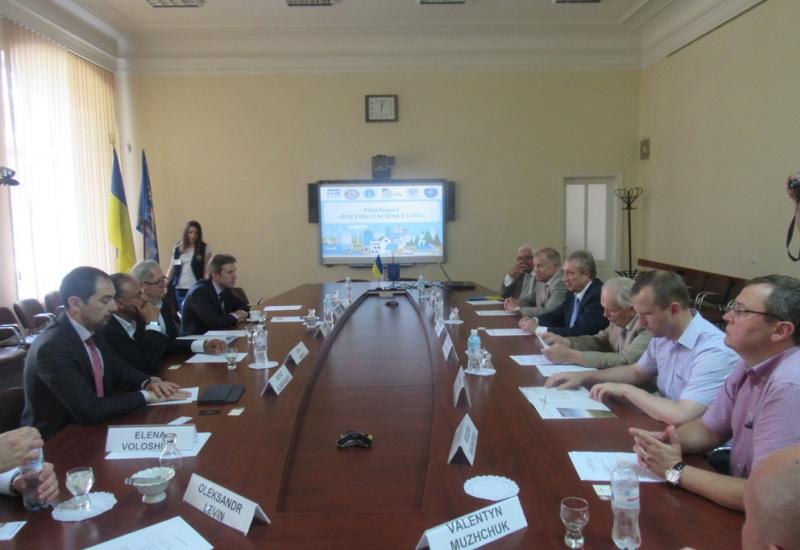 Manager of telecommunication, media and technology as well as from venture and direct capital funds Atul Meta, branch manager of European countries and Central Asia Tomas Telma, the head of its regional representation office in Ukraine and Byelorussia Rufat Alimardanov and the manager of corporation activity in Ukraine Olena Voloshyna were on behalf of IFC Corporation. On behalf of Ukreksimbank – the head of its department Olexandr Grytsenko and the board of directors’ member, Viktoriia Ruda. The real estate developer of «Sky Towers» complex was represented by Olexandr Levin and Petro Slipets.

In the course of university excursion, rector of the university, academician of Ukrainian NAS, Mykhailo Zgurovskyi familiarized guests with some historical facts and present days of the university. Guests have also examined expositions of State polytechnic museum at KPI and its department of space and aviation n. a. I. Sikorskyi.

After the first meeting, guests discussed with university and Scientific Park “Kyiv polytechnic” authorities some cooperation issues according to the lines of Scientific Park activities and «Polyteco Science City» project.

On the part of KPI, together with rector, First Pro-rector of the university, academician of Ukrainian NAS, Yurii Yakymenko, Pro-rector for Research, academician of Ukrainian NAS, Mukhailo Ilchenko, Pro-rector for International relations, correspondent member of Ukrainian NAS, Sergii Sydorenko, general director of Scientific Park “Kyiv polytechnic” Volodymyr Gnat as well as members of Supervisory Board of NTUU “KPI”, director of «Polyteco Science City» Ltd, Bohdan Andriitsev and the head of Expert advisory board of «Polyteco Science City» Ltd, Valentyn Muzhchuk took part in discussion.
The meeting participants were given a presentation of innovative system of «Polyteco Science City». Besides, Mykhailo Zgurovskyi spoke about the principle of activities of Scientific Park “Kyiv polytechnic”, Start-up school «Sikorsky Challenge» activity, the most interesting projects of its graduates who were granted investments being the winners of «Sikorsky Challenge» festival as well as scientific and technical branches that are being developed in innovative university environment and might serve as driving force to relieve Ukrainian economy from recession.

Guests were interested in everything they saw and heard, thus, it was resolved to renew contract and study opportunities regarding the cooperation with particular directions and projects. They will be defining in the course of additional consultation with Scientific Park “Kyiv polytechnic” authorities.