The world on wings from Japan 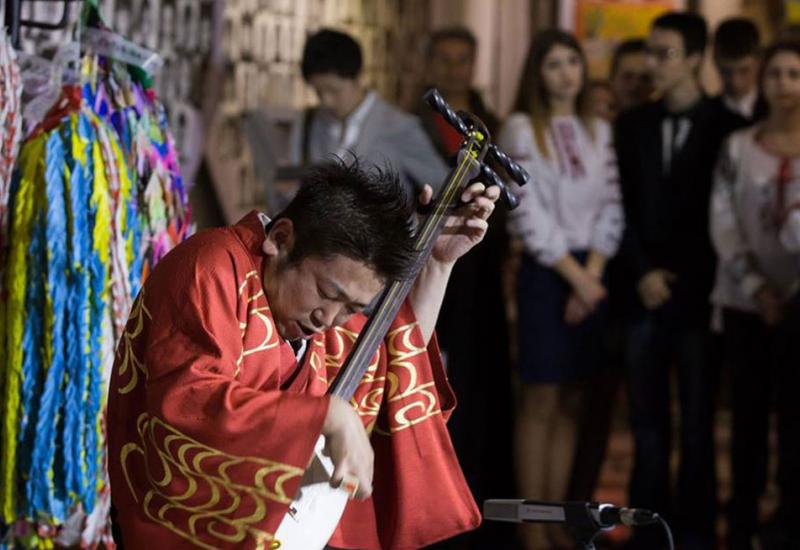 In the spring in Ukraine the action "The World on Wings" has taken place in which more than 100 schools and other institutions have participated (also libraries, preschool educational institution, circles, etc.). Natalya Gudzy has established this action. She is Ukrainian who has been living and working in Japan for 16 years. N. Gudzi, a singer and a bandurist known in Japan, is interested in bringing his life-stories to people about the Chernobyl accident, the 30th anniversary of which Ukraine has noted this year. When the accident occurred, Natalia was only 6 years old, her family was evacuated from the city of Pripyat together with thousands of others. After several successful trips to Japan as a part of the children's team, Natalya has moved to the Land of the Rising Sun and has begun the professional activity for thousands of kilometers from a home.  At the beginning of the career she has received a crane from the father and the elder brother Sadako Sasaki - the girl legend in honor of whom in Japan was constructed a monument "The child of an atomic bomb".

On April 26, in the National Museum "Chernobyl", a ceremony for the transfer of Sadako's crane to Ukraine took place with the participation of Ukraine's first lady Marina Poroshenko and the wife of the Extraordinary Ambassador of Japan in Ukraine Tomoko Summa.

As part of the ceremony, the parties also exchanged cranes made by the Japanese and Ukrainian schoolchildren, with the wishes of peace on the wings. With the efforts of Ukrainian children, more than 50 thousand paper cranes were made. They will find their addresses in distant Japan. It is expected that the Ukrainian schools will receive cranes in reply from the Japanese children in the new academic year.

Within the project also there have taken place Yuji Sasaki's lecture for students of NTUU "KPI", the lecture and a concert for students of profile higher education institutions in KNLU. The main idea of these actions is an appeal to remember sad pages of history which were endured by Ukraine and Japan and the repetition of which we do not  have the right to admit, to unite forces for the common goal: preserving peace and harmony on Earth.

Japan's musicians also came to Ukraine to carry out the project: Aska Kaneko is a violinist with a world name, Akira Inoue is the genius of the arrangement and the brilliant pianist, Shin Ichikava is the person who has made sounding of the traditional instrument koto modern and Riochiro Yoshida - the master of the Japanese play instrument shajisen. They, known and successful in Japan, first visited Ukraine and gave concerts during the ceremony of the transfer of cranes and lectures at KNLU.

The final of the project was the concert "Peace on the wings from Japan", which was held at the National Academic Operetta Theater on April 29.

More than 600 guests could enjoy the sounds of the bandura, violin, piano and Japanese national musical instruments – a koto and a shajisen. In this evening, the members of the group felt the unity of the two nations, which, despite the thousands of miles that divide us, are close to each other. The atmosphere of harmony and coziness prevailed in the hall, because communication with music does not require translation.

The Ukrainian-Japanese Center of NTUU "KPI" expresses its gratitude to the Japanese partners to the committee of the project "Peace on the Wings" for the confidence in the implementation of such an important project for Ukrainian-Japanese friendship. We hope this will be the first step towards further fruitful cooperation.