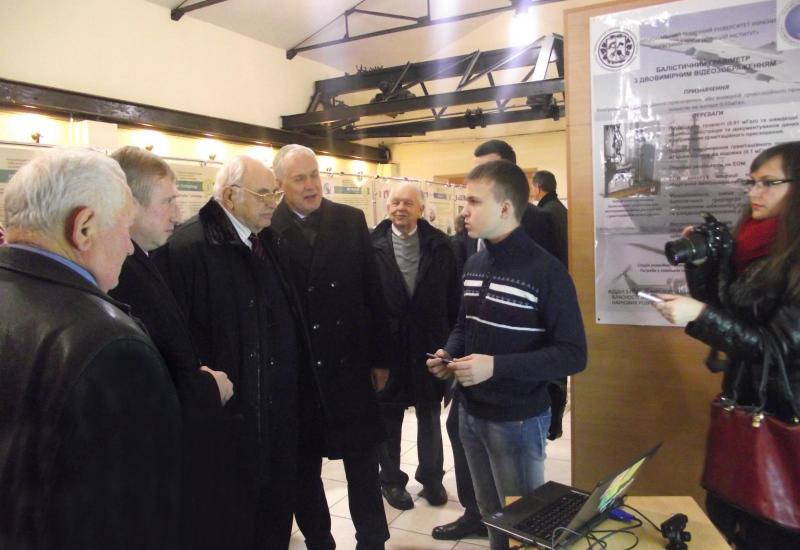 December 10, an expanded meeting of heads of Department of Industry and Entrepreneurship Development KSCA, Members of the board of directors of enterprises, institutions and organizations of Kyiv and deputy heads of regional state administrations in Kyiv was held in NTUU "KPI".

Its purpose was to introduce heads of capital services and enterprises with developments of engineers and scientists of the University, which can help upgrade and make more effective work of urban public utilities, as well as those that can be implemented in production at the Kiev enterprises.

This is the second in the last few weeks visit of the city authorities in NTUU "KPI" - the first one took place on November 20. However, the first visit has a much smaller format and was actually the first aquantance of the new urban heads with scientists NTUU "KPI" and their capabilities. Now a much wider range of responcible people made aquaintance with potentially interesting for the capital and its districts and large enterprises developments of polytechnics. Therefore, the meeting began with a visit to the exhibition hall of the Science Park "Kyiv Polytechnic", where there are prototypes and product development, fully prepared for introduction into production, including those that were awarded at the last festival-competition «Sikorsky Challenge 2014". Vice Rector University of science academician of NAS of Ukraine Mikhail Ilchenko and their authors briefed the guests about them.

After demonstration of the potential of the university and capacity of its scientists help the city to overcome many problems, the participants moved to the hall of the Administrative Council, where a meeting on ways of cooperation took place. Rector NTUU"KPI" academician NAS of Ukraine Michael Zgurovsky conducted the meeting. The meeting was begun with detailed presentation of the Scientific Park "Kyiv Polytechnic". It was made by its Director of Intellectual Property Jaroslav Kologrivov. Talking about the regulatory framework, activities and partners Science Park, he stopped at the last projects that are implemented in this environment, in particular, the development of unmanned aircraft «Spectator»; nanosatellite «PolylTAN-2" for educational, scientific and technological applications; commercialize metal X-ray tubes using a new generation of nanocomposite materials; projects «Intel CamTouch» (interactive whiteboards) and «TechnoEyes» (devices for people deprived of view) and developments in the field of information and cyber security.

Dean of the Faculty of heat power engineering Eugene Pismennyy, Dean of the Faculty of Electric Power Engineering and Automation Alexander Yandulskyy and director of the Institute for Energy Saving and Energy Management Sergei Denysyuk informed the audience about the developments of their departments in energy conservation and energy efficiency. Head of the Department of Ecology and Technology of Plant Polymers chemical engineering faculty professor Mykola Gomel told about the developments in the field of water purification, which, incidentally, are engaged in NTUU "KPI" specialists 10 faculties and institutes.

It's not all projects that might interest capital. At present, as noted by Michael Zgurovsky, university specialists have seventy-two projects ready for implementation.

After the presentations, the meeting exchanged views on future cooperation.

Rector of NTUU "KPI" Michael Zgurovsky summed the results of the meeting: "We have already considerable experience of cooperation in the implementation of various works, but it was based on direct links. They are certainly useful and should remain. But until now we do not have the systematic organization of our metropolis development.We study in the KPI, how it is done in the world, has accumulated some information and trying to create a similar model for us. We therefore propose to move the system work in this direction ... The city, with its development strategy must identify a number of priorities and together we will be able to focus on solving specific problems. "

Photo: author of «Intel CamTouch» project Andrey Konovalenko represents it to the participants of the meeting