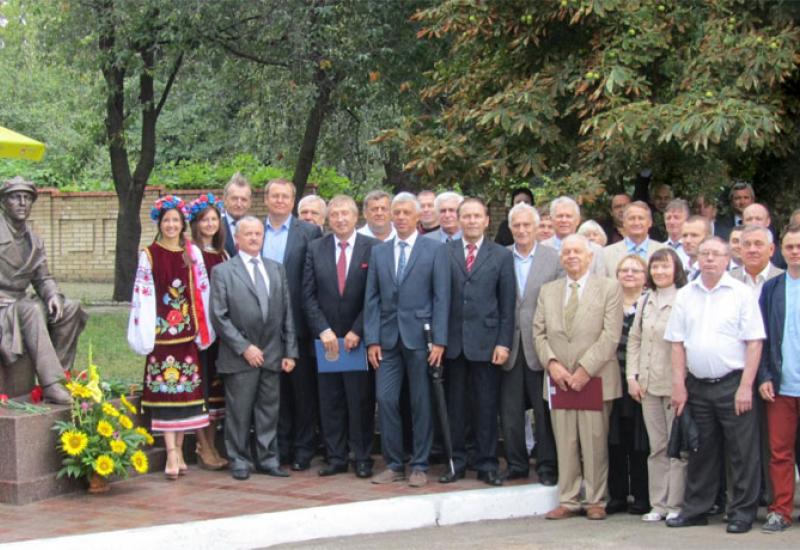 August 28, the day before the start of the new school year, the Avenue of Stars of the University and the monument to the outstanding native aircraft designer Kostantin Kalinin were  opened in NTUU "KPI".

The celebrations began with the opening of the Avenue of Stars of KPI on the central avenue in front of the historic building №1 National Technical University of Ukraine "Kyiv Polytechnic Institute".

Twelve stars memorialize the outstanding graduates of the Kiev Polytechnic first years of its existence -  aircraft designers Dmitry Grigorovich, Vladimir Grigoriev, Fyodor Tereshchenko, brothers Andrew, Ivan and Eugene Kasyanenko, test pilot Alexei Gratsianskiy scientist -metallurgist Ivan Bardin, physicist Benzion Voula, scientist - mechanic Sergei Sorensen, scientists power engineers Alexander Winter and Ivan Shvets. This is only the first Stars of  Alley. In future before the main body of the University the new ones will be open, because between the graduates of NTUU "KPI"  there were many well-known personalities in the world and experts in various fields of human activity.

After the opening of the Avenue of Stars on the Walk of outstanding scientists and engineers NTUU "KPI" participants of the celebrations unveiled a monument to the outstanding graduate KPI native aircraft designer Kostantin Kalinin.

The opening ceremony of the monument was attended by the Rector of NTUU "KPI" NAS of Ukraine academician Michael Zgurovsky, director of the Kharkov State Aircraft Manufacturing Company Valery Guba, deputy director of the Serial plant "Antonov" (Kyiv Aviation Plant "Aviant") Volodimir Astashkin, chief technologist Serial plant "Antonov "Gennady Romanovich, heads of the sponsoring companies, who helped the University to put this monument - Managing Partner of" Island management "Bogdan Andreytsev and head of the " Kalinin Invention Fund "  Vladimir Ignatov, the authors of the monument - young sculptors - the brothers Mikita and Yegor Zigura, teachers and staff of NTUU "KPI" and others.

The name  of Kostantin Kalinin (1887 - 1938 ) was well known to his contemporaries, but now he is remembered mostly only by aircraft designers and historians of technology. Kostantin Kalinin graduated  KPI in 1925. His thesis project focused on the development of passenger aircraft. It was built at the Kiev Aviation Plant (now the "Antonov"), was named "K-1" and became the first domestic passenger aircraft recommended for serial production. So soon the young engineer was appointed chief designer and director of the newly created Kharkov aircraft plant.He created a number of outstanding for its time aircrafts, including the world's first air ambulance "K-4"; the most widespread  in the USSR until 1941 passenger aircraft "K-5", which ousted  from the country's airlines  the German "Junkers" and "Dornier"; the worls's  most powerful in 30 years of the twentieth century aircraft giant "K-7"; the world's first bomber constructed on the no tail scheme "K-12" ("Firebird"), with technical solutions, which are widely used in modern aviation; as well as project fighter with a rocket engine and a triangular-swept wing "K-15", which became a real prototype of modern supersonic machines, etc.

However, his work and life were cut short on top of success: in 1938, he was arrested on a slanderous accusations and executed. It should be added that Kostantin Kalinin was the only shot of all illegally repressed chief Designers of aviation technology in the USSR.

In just a few decades ago, an outstanding  native scientist in the field of mechanics Academician Ivan Artobolevsky said: "There were two big aircraft makers - Igor Sikorsky and Kostantin Kalinin. The first was buried in America as a national hero, and second  no one knows ... ". Now staff and students KPI correct this historical mistake by immortalizing in bronze Kalinin. And even his monument was installed almost opposite the monument Igor Sikorsky.