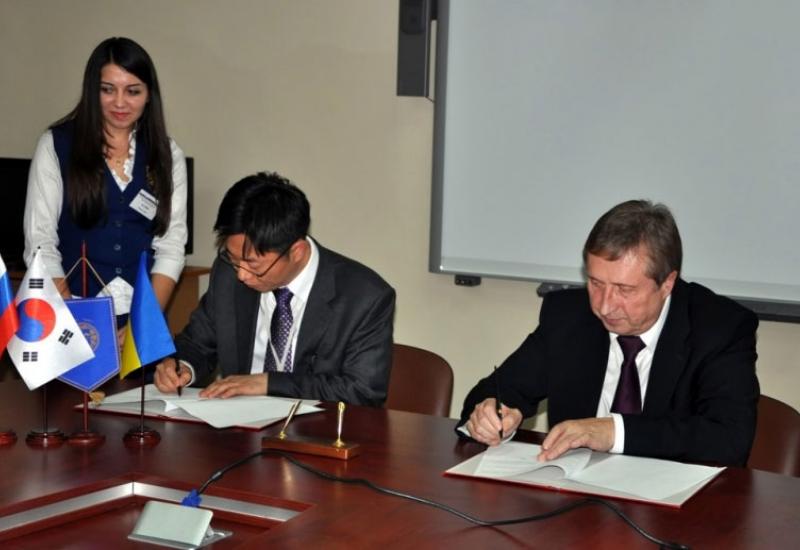 Joint Ukrainian-Korean International Scientific Forum "Science, Innovation, Technology - 2013" took place at the NTUU "KPI", November 21. The guests were The Ambassador Extraordinary and Plenipotentiary of the Republic of Korea in Ukraine Kim Eun Tszhun, scientists of the leading Korean universities and research centers, created in the structure of wide-known companies, such as «Samsung» and «AddPac Technology», representatives of the National Research Foundation of Korea in the Russian Federation and the Ukrainian Research and Technology Center, lecturers and researchers of the  NTUU "KPI".

The Forum began with a plenary session that was opened by the Vice-Rector in International Relations of NTUU "KPI", Corresponding Member of NAS of Ukraine Sergey Sidorenko. "I would like to emphasize that the for the KPI not only the relations in science, education and innovation sectors with the Republic of Korea are of great importance, but for the many years we are making active steps to deepen the cooperation, he said. - Our cooperation with the Embassy of the Republic of Korea is supported by the Ukrainian government. An example is the deal, signed a few years ago, providing the establishment of the joint Ukrainian -Korean IT training center of high technology. This center works at the NTUU "KPI". It seems to be a bridge to expand ties with the Republic of Korea not only for NTUU "KPI", but also for other Ukrainian universities. Today begins a new period of our cooperation in research and education, technical and innovation".

Ambassador Extraordinary and Plenipotentiary of the Republic of Korea in Ukraine Kim Eun Tszhun was present at the opening ceremony. He expressed his appreciation for the participation in the Forum and focused on areas that could be the most promising for further development of cooperation between research centers and educational institutions in Korea and NTUU "KPI". First of all, these are the spheres of space- and IT technology, and bio- and nanotechnology.

The Prorector for Research at the NTUU "KPI", Academician of NAS of Ukraine Mykhailo Ilchenko spoke about the principles of scientific and technological activities in Ukraine, the training of specialists and the main areas of research at the university. Moreover, he noted that according to data of international institutions and to the number of students, whose academic programmes of studying are related to the IT industry, Ukraine joined the top three countries in the world, and the quality of their training is estimated as one of the best. Truth be told, NTUU "KPI" is a leader in the organization of such kind of training in our country Mykhailo Ilchenko emphasized the specifics peculiarities future professionals' training, who are to work in the aerospace industry and their scientific work, especially, about the students' performance in the university nano-satellite development, which launch is scheduled for March next year, and about the students' researches in other fields. Alexander Koval, Mykhailo Ilchenko's deputy informed the guests about the regulatory framework of scientific and technological activities in Ukraine.

There was much to discover about modern science and technology policy in the Republic of Korea at the plenary session from the director of the National Research Foundation of Korea Lim San Hyuna's report. His information has been dedicated to the new economic strategy based on the "Concept of the creative economy". This strategy is designed to overcome the crisis faced by the state, and to lay the foundations of accelerating of the Korean economy development through the creation of new innovative technologies, support for start-ups, promotion of small and medium enterprises in the real sector, encouragement of innovative creativity. Its goal is to create new industries and markets, and new work places, the ultimate goal is strengthening of the country's anticipation of hope and happiness for all its citizens. This policy is implemented in several key areas that use the achievements of modern science and provides the solution of economic, institutional, educational and other issues of a general nature.

The Forum sessions took place in a roundtable during which participants exchanged views on further cooperation and development of specific forms of the same themes. The agenda comprised four sections: "IT technology", "New Materials", "Biotechnology" and "Nanotechnology".

At the Forum evening plenary session, Deputy Director of Ukrainian Science and Technology Center Vic Korsun informed about research projects undertaken in Ukraine with the support of the organization. Also, the director of the Sphere of Intellectual Property Jaroslav Kologrivov delivered a report on general principles and activities of the Science Park "Kyiv Polytechnic". Finally, Head of Strategic Planning Institute for Advanced Technology Company «Samsung» in Moscow Mikhail Kolchenko reported about the organization of research and innovation, the relevant departments' general structure and the principles which the activity is based on.

At the end, Rector of NTUU " KPI" Academician of NAS of Ukraine Mykhailo Zgurovsky and director of the National Research Foundation of Korea Lim Hyun Sun signed a memorandum of intent to establish the Korean - Ukrainian scientific and technical cooperation center between the two organizations.