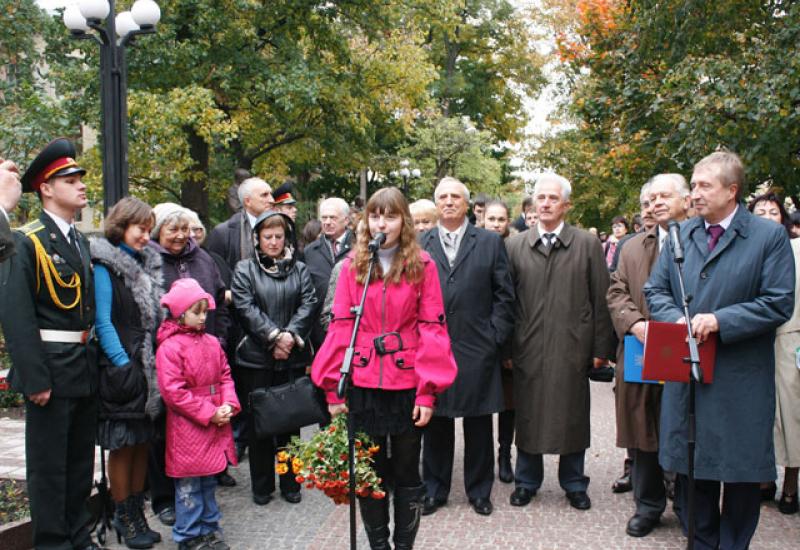 October 13, the alley of prominent designers and scientists who have studied or worked in the KPI, was supplemented by three monuments. The names of brilliant designers of aviation and rocketry Vladimir Chelomey, Leo Lyulyeva and Arkhip Lyulka, who started their way into industry and big science training in the KPI, were immortalized by these monuments.

Welcoming the participants, Rector of NTUU "KPI" M. Zgurovsky noticed that near the monuments of outstanding designers, whose discoveries changed the world, it was installed also the bust of their teacher - the famous mathematician M.P.Kravchuk. He also thanked the creator of monuments - National artist of Ukraine M.O.Oleynyk and employees FPE who made the bust.

Deputy General Designer MIC "NPO Machine Building" A.I.Burhanskyy who worked with V.M.Chelomey, thanked Polytechnic for preserving the memory of an outstanding person, "which is underestimated." According to him, the sum of completed projects V.M.Chelomeyu is no equal in the world: 80% and 100% surface submarine former Soviet Union were armed with its rockets.

The Head of Solomenska DSA I.P.Sydorov, who was present at the opening of all installed in the KPI monuments, believes that the perpetuation of prominent personalities contributes to the preservation of history and continuity for the future generations.

Deputy Chief Designer concern "Almaz-Antey Air Defense" O.H.Kobernychenko praised the initiative of KPI to perpetuate images of prominent scientists, including L.V.Lyulyev whose life has passed under sign "top secret". According to him, during World War II antiaircraft complexes Lyulyev destroyed two-thirds of enemy aircraft. His inventions were ahead of his time in 20-30 years.

Olexandra Litvina – scholar of Savarka village, the birthplace A.M.Lyulka, told that their fellow citizen with his thirst for knowledge and national roots is a role model for youth of the village. Professor FPM N.O.Virchenko, who for many years collects historical materials about M.P.Kravchuk and contributes to his popularization, said that M.P. Kravchuk not only taught to mathematical harmony, but he was also preparing young people to victory and success: live - do - win.

After solemn opening of monuments, flowers were laid to the pedestals.

Vladimir N. Chelomey (1914 - 1984). Born in the town Sidlets Pryvislyansky land (now Poland). He studied at the aviation department of Kyiv Polytechnic Institute (1932) and Kyiv Aviation Institute, which was created on the base of the faculty in 1933. He created a pulsating air-jet engine (ramjet), which is installed on a number of aircraft. As chief designer of RDB-52 V.Chelomey developed naval cruise missile with folding wings, which disclose in the air, allowing it to place in small containers, including those in submarines. Under his leadership in 1944-1954 several types of cruise missiles with ramjet were created. In the second half of 1960s Chelomey performed rocket and spacecraft design to fly to the Moon, and the trial design for an expedition to Mars. In the Soviet Union he was the first to put forward and tried to implement the idea of separated warheads. Under the direction Chelomey launch vehicles and satellites "Proton", "Polet", "Kosmos-1267", space stations "Salute" were developed. Academician of the USSR (1962), member of the International Academy of Astronautics (1974), Professor MVTU of Bauman, twice Hero of Socialist Labor (1959 and 1963), winner of the Lenin (1959) and State (1967, 1974 and 1982) Prizes of the USSR.

Leo Veniaminovich Lyulyev (1908-1985). Born in Kiev. He graduated from the Mechanical Department of the Kiev Polytechnic Institute (1931). He worked as a designer in the Ural Research Institute of Agricultural Engineering, later - on Motovylihinsky plant as an engineer, chief of bureau rationalization, design engineer. On the eve of WWII he was moved to the plant number 8 in Podlipki, where he worked in the section of artillery designs (later - Research Unit).24 , 37 and 45-mm anti-aircraft guns, 76 - and 85-mm anti-aircraft guns were developed and produced in this plant with his participation in 30s of the twentieth century. In 1941 the plant number 8 was evacuated to Sverdlovsk and placed at the site of the plant of Kalinin. In 1945 Lyulyev was appointed chief designer of the plant.In 1947 the plant was reorganized into the DB of large-caliber antiaircraft artillery- RDB-8. In 1964, under the direction L.Lyulyev they were developed and implemented air defense missile system AMS "Krug", a series of ship missiles, then - AMS "S-200", and in the first half of 1980 - a unique AMS of new generation "C-300B." Doctor of Science (1966). Twice Hero of Socialist Labor. Laureate of Lenin (1967) and State (1948 and 1977) Prizes of the USSR.