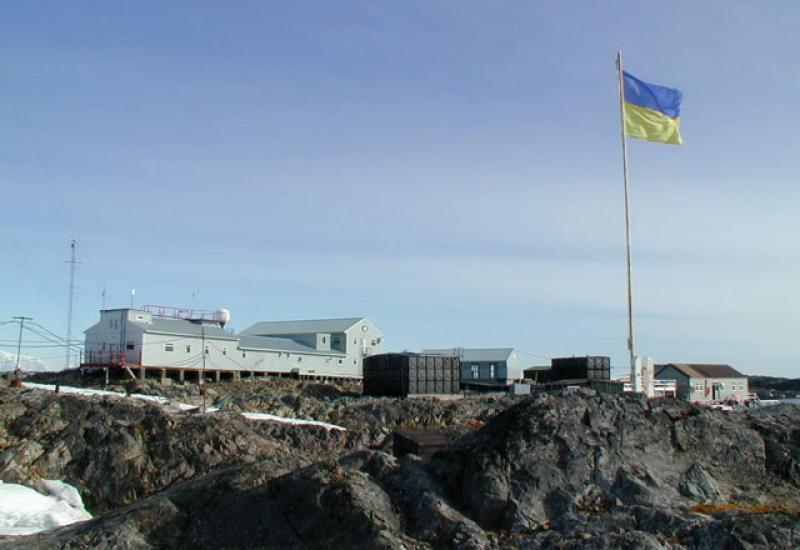 Scientific base on Argentine Islands near the Antarctic Peninsula was founded during the British expedition to Graham Land in 1934-1937 years. In 1947, the British decided to establish a full-round weather station. The project envisaged the base station on the basis of the first building on the island of Winter. However, when the expedition landed at the end of January on this island, they could not find any building. Only later on the opposite shore of the strait the remains of wooden structures were founded, suggesting that the building was demolished a giant wave. In this regard, the first wintering party was forced to build an improvised house for themselves on their own. The station was named base F, and was designed for wintering 4-6 persons. Up to 1953 the men wintered at this place. And only in the 1954  the new building was built on a nearby island Galindez, which already can live up to 10 people. The last major restructuring of the station was in 1980, when it was built out of the old one-story two-story building. In 1977 the base was renamed F station "Faraday".

The station conducts research on several directions. Initially it was focused on the meteorological program. Thus, this station has a unique long series of continuous meteorological observations in the Antarctic Peninsula. In 1957 a program of geophysical research was started, which includes magnetic and ionosphere research.

In 1957, the spectrophotometer Dobson was installed at the station, which marked the beginning of the measurements of ozone in the atmosphere.

In 1996, a new, more modern station "Rosera" was opened 300 km south of the “Faraday”, which is equipped with the runway and the ability to simultaneously accommodate about 100 professionals in the summer season. It became uneconomical to keep in the same area two stations. To close the station is also quite expensive, besides such valuable.

In November 1993, the UK has extended through their embassies proposal for the transfer station "Faraday" on the island Galindez Argentine archipelago one of the "non Antarctic" countries.

In August 1994, it was decided to transfer the station "Faraday" Ukraine. In August-September 1994, during the twenty-third session of the SCAR, Ukraine joined this international organization, which is engaged in scientific research in Antarctica.

In 1994 it was started the project "Ukraine returns to Antarctica", which Soros Foundation "Renaissance" provided a grant in the amount of  12 thousand USD. The British passed the station with the equipment, among which the polar relic – the spectrophotometer Dobson - a device for measuring ozone, whereby in 80s was discovered the ozone hole over Antarctica. Ukrainian explorers raised blue and yellow flag station on February 6, 1996. The station was named "Academician Vernadsky".

The number of Ukrainian expedition is typically less than 15 people, mostly scientists. The most important among them are Geophysics and Meteorologists - the station is focused primarily on the study of climate.

The clearer the weather, the more work. Once a week it is a communication with Kiev. Holy day Ukrainian explorers is Friday - general cleaning, sauna, dinner with wine. Evening dress is required. During summer days (in Ukraine at this time Christmas is celebrated) – there is a conquest ice mountains near the station.