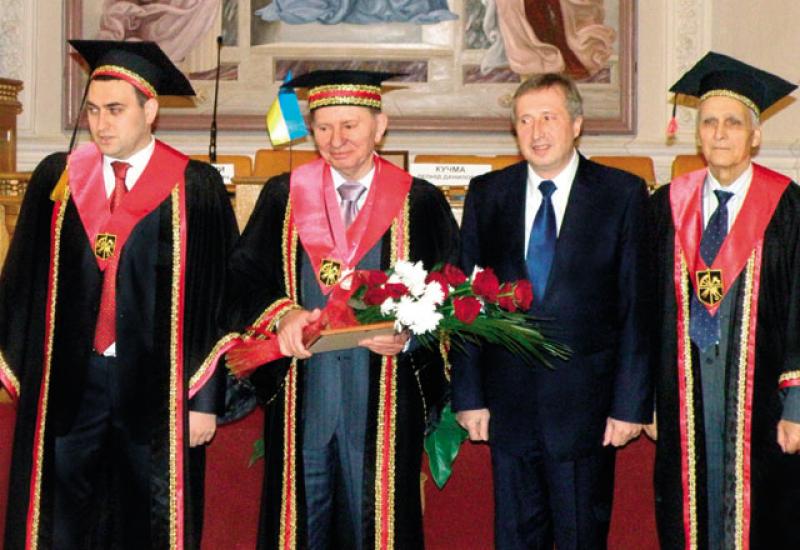 The second president of Ukraine Leonid Danilovich Kuchma was awarded at ceremonial meeting of administrative council of NTUU "KPI" on November 25 on the occasion of assignment to it ranks "The honourable doctor of NTUU "KPI", the cloak and a breastplate is handed.

Leonid Kuchma was born in the village of  Chaikine  in rural Chernihiv Oblast . His was wounded in World War II  and eventually died in 1944. His mother worked at a  kolhoz . In 1960 he graduated from  Dnipropetrovsk National University   with a degree in mechanical engineering (majoring in aerospace engineering). In 1960-1982. He is an engineer, the senior engineer, the leading designer, the assistant to the main designer, the technical lead of tests of space-rocket complexes of Baikonur Cosmodrome (Kazakhstan). In parallel in 1975-1981 he becomes the secretary of party committee CB Yuzhnoye, in 1981-1982 becomes the secretary of Communist Party committee ON "Southern Machine-Building Plant" - at that time the largest plant military and the missile and space equipment, and also civil production in the Soviet Union. In 1982-1986 he became the first deputy general designer of CB Yuzhnoye, in 1986-1992. I became the CEO ON "Southern".

He is awarded the order the Labour Red Banner (1976), the winner of the Lenin award (1981) and State award of Ukraine in the field of science and equipment (1993). Books "I Believe in the Ukrainian People" (2000), "About the most important" (2001), "Ukraine - not Russia" (2003), "The way" (2004), "The broken decade" (2009) was written by him. Since 2004. Kuchma heads the Ukraine charity foundation created by him who is engaged in support of talented youth, revival of rural libraries, scientific and expert work, the international cooperation, realizes humanitarian projects. L. Kuchma is the founder of Academy of technological sciences of Ukraine, the academician of Engineering academy of Ukraine, the honourable doctor of the leading educational institutions of the world.

In nomination speech L. D. Kuchma thanked for the shown great honor. He called KPI main technical higher education institutions of the country and noted that if to remember all outstanding people who passed KPI school, to work and study here is very honourable. Reflecting on a condition of science and education, the politician quoted one of presidents of America: "The USA spends funds for science not because rich but because wants to be rich". He shared also impressions of a recent meeting with the president of Israel Shimon Peres. That on a question of a secret of prompt technical break of its country called one of the main factors high education level and integration in the international educational space.

L. Kuchma shared the reflections about a further way of development of our country: it is possible to allow foreign productions with their production, having turned into the Third World country, and to lose own industry, and it is possible to choose an innovative way of development and to seek to take a place among the developed countries of the world. He complained and insignificant current financing of space and aviation branches, doesn't allow them to increase the potential and to bring new competitive production to the market.

About partnership with Russia, L. Kuchma noted that it is possible to hope for the neighbor and it is necessary, but it isn't necessary to expect that someone will come and will offer favorable contracts on power, the nuclear industry, etc., it is necessary to develop the high-tech industries and to enter the international market with the projects. By the international estimates, in all directions of development of Ukraine is in the middle or the end of lists, but according to the same experts of opportunity for development in the country more than are sufficient, it is necessary to create the corresponding conditions only.

On a present economic situation in the country, the president agrees that it is necessary to go on tough, unpopular decisions ("if we won't tighten a belt, future at us isn't present"). Thus he is very critical treats actions of the government, directed on external loans ("for 1994-2004 Ukraine borrowed only 4500000000, but only for this year - more than 10 billion"). The politician is convinced, what not enough funds are allocated for innovative development from the budget, productions work at the outdated equipment from what then to repay debts? He insistently advises the Ukrainian intellectuals, in particular technical, to be more active and to participate in various discussions and hearings concerning economic development of the state and in every possible way to inform to the power the expert opinion on important strategic questions.

The politician also noted that about Ukraine know in the world a little. For example, that Ukrainian rockets started about one thousand spacecrafts, about unique development of start from a sea platform of a bottom and so forth. Scientists also have to remind of it.

Discussion of the book of L. Kuchma "The broken decade"  also happened there in which took part the prof. B. V. Novikov, the dean of FSN; academician of NAN of Ukraine M.Z.Zgurovsky; prof. Yu.F.Zinkovsky, head of the department of designing and production of radio equipment of RTF; V. G. Slipchenko, prof. of chair of automation of design of power processes and systems of TEF, etc.

The author of the book "The Broken Decade" L. D. Kuchma considers that it will help to understand better a present political situation and to define steps for recovery from the crisis. Among the reasons of political and economic problems in the country the author calls to immemorial fight of the Ukrainian hetmen for the power, few young specialists in all legislative, executive and production links, and responsibility for the country and its development is capable to accept absence of people who want.

B. V. Novikov characterized the book as a gift for future historians, sociologists, economists, after all the author was in the thick of things and in a certain degree influenced them. He paid tribute to the author as extraordinary uncommon personality and, having remembered the belonging to Communist party which members criticized actions of the president in due time, but didn't fall before squaring of accounts later, summed up: it is possible to lean on the one who resists.

The head of group of the software of the Snow-storm complex V. G. Slipchenko (still stay on alert), is awarded for these works of the State award of Ukraine in the field of science and equipment shared reminiscence as after accident long couldn't get permission to opening of laboratory on studying of influence of small doses of radiation on the person for the CNPP, and exactly thanks to L. D. Kuchma's intervention it was succeeded to overcome bureaucratic barriers and to adjust activity on complex ekologo-economic monitoring and to train specialists in this direction.

On a question of the graduate student of FMM of ways of recovery from the crisis for Ukraine, the answer was received: in any domestic economy the Russian segment therefore mutually favorable partnership needs to be developed is; privatization in the country has to occur taking into account national interests; only for political stability (interaction of the government and the president) to the country will come foreign investor.spetsialist in this direction.

At the end M.Z.Zgurovsky thanked the guest for invaluable information which polytechnicians had opportunity to receive first-hand, and hoped that further such communication will be regular. In reply to L. D. Kuchma once again wished to hold highly a banner of KPI and to inform to the younger generation not only professional knowledge, but also information on outstanding people who studied and worked here, thereby cultivating respect for predecessors and pride of educational institution where we study and we work.