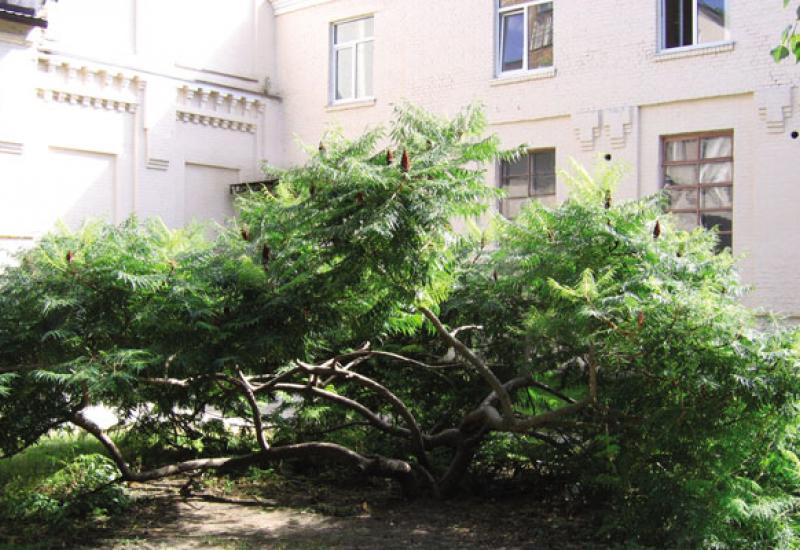 At the elegant glade near the pump-room, which was chosen by the young mothers-grandmothers, right from the iron giant – locomotive,  unusual tree-shrub, spectacular and attractive, draw an attention. This is the  fluffy sumac – the native from North America. Some people  it resembles acacia or rowan, others compare it with a palm because of  big carved  leaves. In summer, the sumac is  light green, and in autumn its leaves turn bright, like a flame, orange, red, purple. Very few plants can boast such a riot of bright colors and shadows.

The genus comprises 120-150 species of sumac. Most of them grow in South Africa and sub-tropical areas of North America. Most often it is the low deciduous, rarely evergreen trees, among them there are shrubs and vines.

The word "sumac" probably derives from the Aramaic of the adjective 'red', in antiquity a red paint was produced from its fruits. The species name comes from the Latin corium - leather as it was used as a tanning agent in the manufacture of leather.

Sumac fluffy, it is also called virgin, velvet, staghorned acetic tree - the only kind to survive in the middle latitudes. It reaches a height of 10 meters. It has a laced krona to 5 m in diameter and thick, densely pubescent light brown shoots resemble reindeer antlers. Velvety surface long leaves are highlighted by whitish matte patina underneath.

Small flowers clustered in dense pyramidal panicles up to 20 cm long. Staminate flowers are yellowish-green, pistillate - red. Sumac fluffy - the plant is dioecious, so to obtain seeds it should be planted  the male and female varieties. The plants start flowering and fruiting on the fourth or fifth year of life. After 15-20 years, the plant dies.

You can meet the sumac fragrant. Its fragrant sprouts reach meter lengths. In the southern region there is sumac naked (or leather, tannins).

Sumac - a valuable technical plant contains tannins, which are used in the processing of leather. Leaves, bark and roots are used to make paints for silk fabrics. Acetic tree contains  in its leaves about  25% tannins. For comparison - the oak bark, which, in fact, gave the name to these substances, contains only 10-15%.

This plant is unpretentious, tolerates drought, is used in landscaping, resistant to air pollution. But it could be an "aggressor" because  it reproduces  by root shoots too quickly.

In the fruit shell there is wax - the raw material for especially valuable varnish. Durable colored  sumac wood (from yellow to orange-red) is used to make decorative items.

Indians have long used the extract of the fruit as a food spice, it tastes like vinegar, so at home (in North America), it is called acetic tree. The fruit shell contains tartaric acid, - the original beef curry.

Dried or ground fruits are sold as a powder of  ruby color. The thicker and denser the color of ground sumac - the better the spice. Because the sumac is almost without smell, for this spice is important not to lose color.

Sumac widely used in the Central Asian cuisine, virtually replacing the lemon, besides giving the dish a brown-red color. Sumac is added to fish and birds, in marinades, salads and the like. In Turkey and Iran the rice is seasoned with ground sumac, in Lebanon, Syria, Egypt, thick broth of berries are added to meat and vegetable dishes.

Mixed with onions, the sum is used as an appetizer. Sumac on sandwiches looks very nice and tasty. It is a good supplement to the bean and pea soups. Along with cumin and black pepper it is great for pork chops, and with zira - to lamb cutlets.

In medicine it is used to lower a temperature, at the Middle East an indigestion is treated by sumac infusion.