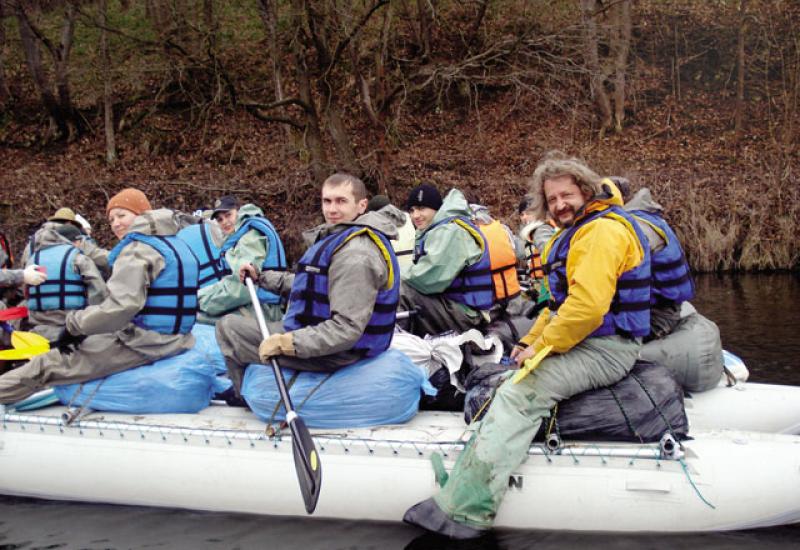 May generously floods urban streets with light and warmth. There is a strong desire to play truant and to go on some long journey. I am sure that everyone has such “attacks” of tourism but there are people for whom tourism is an integral part of the life. Residents of campus who are crazy about hikes with backpacks pickaback and like enjoying unbounded expanses of nature are united in youth tourist club “SKIF” of NTUU “KPI” campus. Ihor Pavlovych Kucheriavyi has been the head of the club and has been uniting its called for expanses students for four years.

When a person is really fond of his job you could see that with half an eye. Irrepressible desire to start on some journey with members of the tourist club springs up after a conversation with Ihor Pavlovych. This is a man of profound moral values, a joker and an untiring organizer – “SKIF” is lucky to have such a leader: Ihor Pavlovych is the life and soul of the club and vice versa (but maybe there is one soul for two, is not there?).

Things just happened that most student clubs in KPI are placed in basements of hostels and tourist club “SKIF” is “hidden” in the basement of the hostel №11.

The steps down will open to you limitless possibilities: participation in long hikes of I, II, III categories of difficulty both treks and water hikes and taking part in tourist competitions, training and a chance to obtain a certificate of organizer of sports tourism.

In documents is noted that “SKIF” is occupied with organization and holding of mass tourist and local history and sports activities for students of campus, however there is no such a document that could “contain” indefatigable leader, approximately thirty noisy students, 2 catamarans, dozens of sleeping bags, tents and pots – the stuff with which members of the club prepare themselves for journeys. Nowadays “SKIF” has its own tourist equipment for mountaineering and boating for 50 thousand UAH, but it all started out of a pot and a big spoon.

Now each year tourist club “SKIF” organizes three serious long hikes, weekend excursions around a city and on the outskirts, helps in ecological actions and tourist competitions that are carried out by campus of NTUU “KPI”. Members of the club also had their hand in a well-known among students “Labyrinth”. Since the establishment of the club its members have been in the Crimea and in the Carpathians and have passed over 1500 km of waterways of Ukraine.

From my “not touristic” point of view it was a real exploit of the members of the club to go on water hike on sports catamarans down the river Southern Buh from 20 to 28 March of this year. Administration of campus of NTUU “KPI” and NTUU “KPI” Society for promotion of defense of Ukraine led by A.V. Savchuk helped to prepare for this hike. Members of the club were indebted to Andriy Volodymyrovych for financing of motor transport and food. Administration of campus of NTUU “KPI” did much work helping to process all necessary documents.

7 days on water, 140 km of route length and nearly 20 rapids among which were well-known Kyiv and Pechersk rapids of the third category of difficulty, uncontrollable current, snow, rain and the sun were the trials not for weak.

A team of 30 people on 5 catamarans led by the head of “SKIF” I.P. Kucheriavyi and the instructor of International Centre of Tourism and Sports I.I. Fedorchenko had a single battle with the rough Southern Buh. As it turned out only 8 students from 20 had a sufficient training while others underwent baptism of fire in combat conditions.

The head of tourist club “SKIF” Ihor Pavlovych Kucheriavyi says: “Success of the whole group depends on each person” – and under extreme conditions boys and girls took actions in coordination, to the end of the hike beginners learnt to do everything – from preparation of meal to preparation of catamarans.

All hikes of this year have been dedicated to the memory of the Holodomor – “Ukrainian beauty and pain”, therefore the route of the rafting passed through the territories where famine had annihilated almost all villages. The aim of the tourist water hike was not only to strengthen students’ physical training but also to remind them the history of Ukraine.

In the first village Tyvriv tourists visited the common grave of soldiers of 145th division who fell in battles during World War II in 1941. Then they reached the village Pechera where they went to see the Potocki castle and the final destination was a small town Raihorod. Everywhere where the members of the club stopped they held ecological actions – cleaned territories. Properly, one of the tasks of the hike was a cleaning of banks of the river Southern Buh.

They stayed overnight farther away from population centres – it was a requirement of the rules and also out of harm’s way. Intrepid tourists woke up at 7 a.m. Two hours later they were already on water with all necessary equipment. At half past three there was a stop when there was possibility to take off life jackets, dry out clothes and outfit. Then tourists ate meal prepared in field conditions. Porridges, soups and even green borscht cooked on fire and in friendly company – you will not find something more delicious. And in the evening – songs with guitar. All fatigue after a hard day falls back and you dream about a next morning, about a meeting with the rough Southern Buh.

Ihor Pavlovych Kucheriavyi told that during a day tourists could sail 15-20 km – all depended on the current speed; on some rapids the speed reached 30km/h. In the afternoon the team contacted with a base via satellite navigator informing about their location and the situation in whole.

“Tamers of a current” had important tasks: to take photographs of rapids of the river Southern Buh, to analyze high-water mark and level of fall of water and to deliver all the data to International Centre of Tourism and Sports. There it will be used for creating of the following tourist routs and will also help to ecologists and hydrologists in studying of ecosphere of the riverbed of the Southern Buh.

While communicating with participants of the hike you see only a delight from a covered route and a desire to go on a next journey. “The Southern Buh is one of few rivers that may grant you unforgettable impressions and feelings” – tells Ihor Pavlovych.

Every year the tourist club “SKIF” organizes three water routs from which two are constant and are down the rivers the Souther Buh and the Cheremoch and the third is every time a new hydrological object. In addition, there is an obligatory hike to the Crimea.

The aim of “SKIF” is to obtain in the future a status of an international tourist club. Nowadays “SKIF” collaborates with other tourist organizations and, of course, is opened for all comers. To find out more about the club or to become its member you may contact the directorate of campus (the hostel №3) or the head of the club Ihor Pavlovych Kucheriavyi (tel. +38098 320 92 41) in person. Summer time, the time of trips and journeys, is coming and, believe me, “SKIFF” may make it really unforgettable.

Valeriya Dobryivechir
On the photo are members of the tourist club “SKIF” on the river Southern Buh in March 2009.