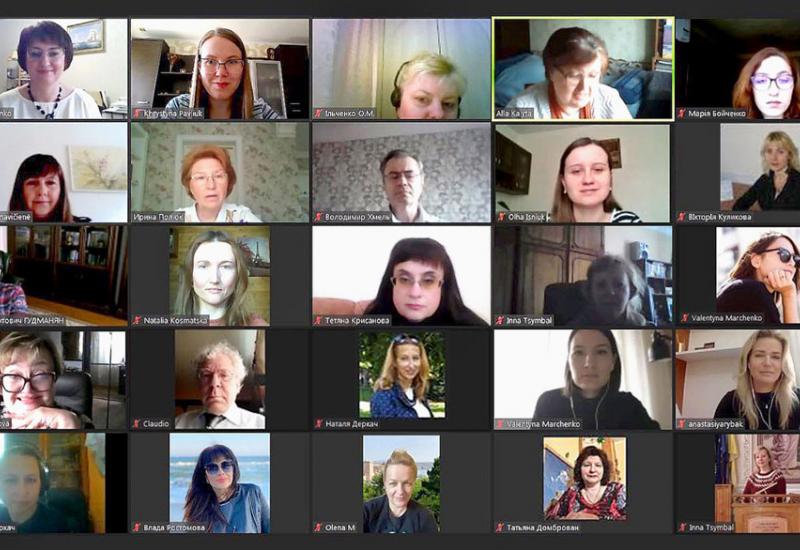 To find answers to the questions solved by modern linguistics, and to promote their integration into the linguistic picture of the world the fifth anniversary round table "Modern trends phonetic research “ was held on April 22, 2021 on the basis of the Department of Theory, Practice and Translation of French at the Faculty of Linguistics of Igor Sikorsky Kyiv Polytechnic Institute.   The issues and problems discussed at it come from the very essence of linguistics, because it is a field of interdisciplinary research, combining knowledge of psychology, sociology, anthropology, philosophy and a number of other sciences of human speech in research, aimed at understanding the mechanisms of coding, actualization and decoding of oral and written speech, structural organization and patterns of functioning of the conceptual system of language, the specifics of the interaction of verbal and non-verbal means of expression of the meaning of uttering, and so on.

It is worth noting that the quarantine restrictions did not affect the conference level in any way. On the contrary, thanks to the online format of the event, many scientists from Ukraine, as well as representatives of the linguistic scientific community from Lithuania, Italy and Canada were able to join this event. In general, the jubilee meeting of the V Round Table brought together leading philologists and novice scientists in the field of theoretical, experimental and applied linguistics from 21 universities of Ukraine, Europe and Canada, who focus their creative energy on the study of sound structure of speech and speech as important component of human communicative activity. The scientific staff of the event was also strong - 10 doctors of sciences, 21 candidates of sciences, graduate students and undergraduates.

The plenary session of the round table was started by Olga Ilchenko (Doctor of Philology, Professor, Head of the Department of Foreign Languages of the Centre for Scientific Research and Teaching of Foreign Languages of the National Academy of Sciences of Ukraine). In her speech, she described the latest pronunciation tendencies in modern English, emphasizing such phenomena as "octoliteraphilia" and the loss of the phoneme /h/ in different positions of the word.

Alla Kalita, characterizing the development of linguistic and energetic research within experimental phonetics at this meeting, stressed the need to find new methods of interdisciplinary study of human speech and thinking. In her speech, she presented a methodology for modelling cognitive thought processes during speech generation using the theoretical apparatus of a number of psychological, linguistic and social sciences based on a systems approach and modern synergetic doctrine of chaos theory. Alla Kalita demonstrated the possibilities of expanding the range of interdisciplinary research based on the model of the pyramid of spheres of spiritual existence of the individual as a universal conceptual model of scientific consideration of any cognitive phenomena, processes or events related to speech and mental activity.

The report by Anastasia Rybak, founder and CEO of SARGOI International Community, a certified trainer for foreign language teachers, focused on the digitalisation of the educational space and the search for effective ways to teach a foreign language online. The speaker outlined her vision of the specifics of learning pronunciation in terms of distance learning and gave specific advice on the diversity of phonetic exercises during classroom classes and independent work of students to improve their pronunciation culture.

Doctor of Philology, Professor Jolita Urbanovicene (Institute of Lithuanian Language, Vilnus, Lithuania) gave qualitative and quantitative characteristics of consonants of Latvian and Lithuanian in a comparative aspect. She said that currently the team of phonetists of the Institute is developing a methodology for conducting fundamental research on the sonants of comparable languages.

The speech of Larysa Makaruk, Doctor of Philology, Dean of the Faculty of Foreign Philology of the Lesya Ukrainka Volyn National University, was devoted to the interaction of verbal, non-verbal and para-verbal means in modern video resources aimed at preventing the spread of COVID-19. In her report, the author emphasized that such combined resources open up new facets for further exploration, which can focus on the meaning and importance, as well as possible ways of interpreting it.

Claudio Barney (Faculty of International Relations, University of Milan, Italy) spoke about the phonosemantic phenomena inherent in the work of the French writer, two-time winner of the Goncourt Prize Romain Gary.

The work of the conference was continued in the form of a discussion. The discussion was joined by Doctors of philology, professors O.P.  Vorobiova, A.G. Gudamian,  T.I. Dombrovan, T. Krysanova and others. At the conference were discussed issues relevant to modern linguistics such as deepening the cognitive, culturological, pragmatic and energetic aspects of phonetic studies of discourse; phonosemantic and phonostylistic features of texts of different genres; patterns of influence of the emotional state of the individual on the prosodic organization of speech; the specifics of the speaker's identification by the phonetic design of his speech; constancy and variability of sociophonetic parameters of speech; paralingual characteristics of emotional speech; linguocontrast studies of phonetic systems of foreign and Ukrainian languages, as well as topical issues of translation and methods of teaching phonetics of a foreign language.

During the discussion were expressed hopes to expand cooperation with foreign partners for the implementation of joint projects to study the sound matter of language, as well as to implement the results of modern developments in phonetic research directly into the educational process.

Finally, for many phoneticians in Ukraine, conferences and round-tables on current trends in phonetic research have become a single platform for the exchange of information, knowledge and different visions of the same issues. Therefore, summing up the results, it was emphasized that we need to hold annual events of this level to exchange information on the search for philologists - representatives of different countries and scientific schools in the field of theoretical, experimental and applied phonetics.