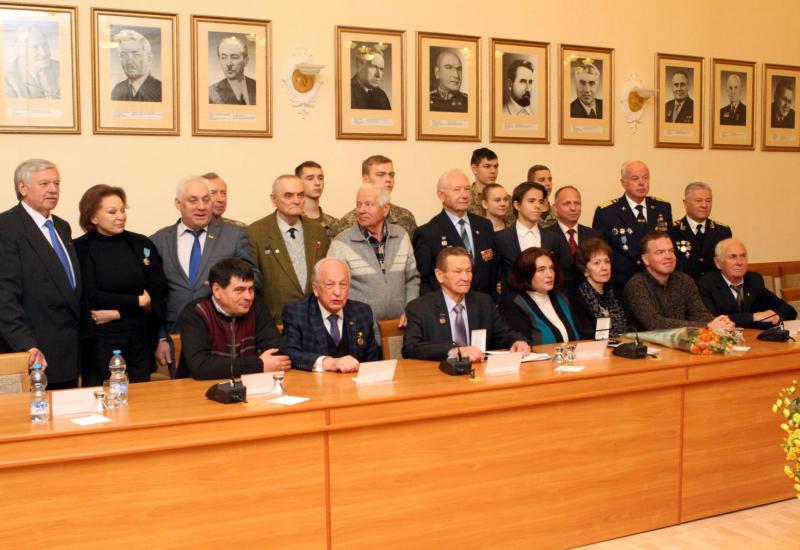 Roundtable took place on November 22 in the Igor Sikorsky Kyiv Polytechnic Institute. It was dedicated to the 22nd anniversary of the beginning STS-87 mission (from 19.11 to 05.12.1997), during which the flight on the spaceship of the first independent Ukrainian cosmonaut Leonid Kadeniuk was held.

Leonid Kadeniuk is the person who was very close to the National Technical University of Ukraine Igor Sikorsky Kyiv Polytechnic Institute. For a long time, he cooperated with the university, actively helped it to solve some issues, providing the training of specialists in the appropriate field. In the closing stages of his life, he received the title of Doctor Honoris Causa of the University and was even elected the Vice Chairman of Supervisory Council. So the roundtable turned out to be especially warm and even informal. Moreover, not only the representatives of the State Space Agency of Ukraine, the Aerospace Society of Ukraine, the Public Organization “Environmental Security Council”, veterans of the cosmodrome Baikonur, Kapustin Yar, Plesetsk, colleagues of Leonid Konstantinovich who are members of candidate group before the space flight and other representatives of the organizations with which he cooperated, took part in it, but also Leonid Konstantinovich’ family, namely his wife Vira Yurievna and son Dmitry Konstantinovich. And, of course, professors, students and academic staff of the KPI, as well as pupils who are members of the Ukrainian Youth Aerospace Association «Constellation".

However, the round-table meeting led by the first Vice President of the Aerospace Society of Ukraine, and in 1997 he was the head of the conjoint with the USA space project from Ukraine and the Deputy Director-General of the National Space Agency of Ukraine Eduard Kuznetsov was, in fact, quite official. It was opened by Mykhailo Zgurovsky's speech who is the rector of the KPI and academician of NAS of Ukraine. “Certainly, Ukraine was the space state and should remain in this position. This should be our joint effort, ”he emphasized. Kyiv Polytechnic Institute tries to contribute to this deal, our scientists, who create student satellites, aimed it. Although they are called to be students one, in their functionality they are not inferior to those that carry out missions as part of international space projects ... So, we as representatives of the educational and scientific sector would like to be partners with the State Space Agency, state-space companies and other Ukrainian enterprises working in this field, and with all our opportunities to aid the development of this deal.

Acting Chairman of the State Space Agency of Ukraine Volodymyr Mikheyev reminded about the main participants of the Ukrainian-American project in 1997 from Ukraine, its tasks, preparation stages, and realization, as well as about the current activities of the Agency. Eduard Kuznetsov told more about the joint space project, which involved the flight into space of the first cosmonaut of independent Ukraine, and about the flight itself. The striking example of his story was the film "Space Mission" about the pre-flight days of the "Colombia" crew, the launch of the space shuttle, space work, landing and the greeting astronauts on the Earth. It should be noted that the preparation for the flight had several directions.

One of them was planning a science experiment. Therefore, the former candidate for flying on the shuttle "Colombia", in those years she was a member of the Holodnoho Institute of Botany National Academy of Sciences of Ukraine, Nadiya Adamchuk-Chala dedicated her speech to how it has happened and what the scientific researches consisted of. Yaroslav Pustovy, who was back up cosmonaut of Leonid Kostiantynovich, has passed all the preparation stages for flight and carrying out scientific experiments, congratulated the participants of the round-table via video link, because now, as it was explained by Eduard Kuznetsov, he works in one Canadian space company, which prepares jointly with Ukraine experiment to build the launch complex for the Ukrainian Cyclone-4M rocket.

But afterward, Vera Kadeniuk shared the memories of her husband and his biography before his becoming the cosmonaut. After undergoing a very careful selection to the squad of Soviet astronauts and hard, or rather cruel training, about which Vera Yurievna also spoke a little bit, he was a test astronaut and test pilot, including the reusable Buran space system. And only after his inclusion in the squad of astronauts of the National Space Agency of Ukraine. In 1995, he successfully was selected to take part in the flight on the USA reusable spacecraft the "Colombia" in the mission STS-87. His dream about going to the stars, which he cherished since he was nine, came true. So his way to space was very tough.

Representatives of the National Bank of Ukraine delivered the speech to the participants of the round-table announcing that the main financial institution of the country is preparing the commemorative note dedicated to the first cosmonaut of independent Ukraine Leonid and his flight. By the way, it will be different from our usual paper notes by the vertical arrangement of the image and captions.

Finally, Eduard Kuznetsov informed all present that the organizations where Leonid Kadeniuk was the head or member governing bodies, namely Aerospace Society of Ukraine, the Environmental Security Council (whose Honorary President he remained forever), and the Youth Association«Suziriya» decided to found a medal named after Leonid Kadeniuk. Therefore, the first award ceremony was held at this meeting. It was received by the Head of the Department of History of Aviation and Cosmonautics of the State Polytechnic Museum at the KPI, retired lieutenant colonel, Chairman of the Central Veterans Council of the Baikonur Cosmodrome of Ukraine Oleksandr Boltenko.