Lecture by Pablo Goldschmidt, a renowned expert in the field of virology and molecular pharmacology 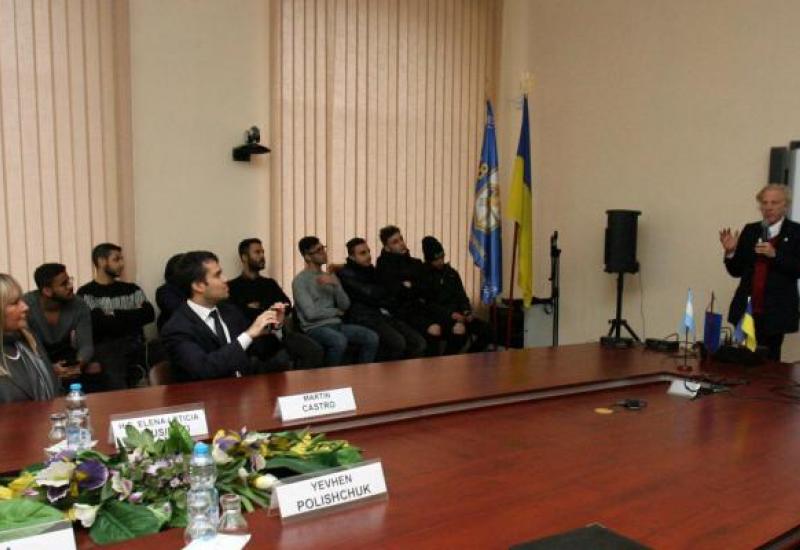 Well-known specialist in microbiology, an employee of the Cannes-Van ophthalmic clinic in Paris (France), Dr. Pablo Goldschmidt delivered a lecture on November 21 for students and staff of the Faculty of Biomedical Engineering and the Faculty of Biotechnology and Biotechnics in Igor Sikorsky Kyiv Politechnic Institute.

Ambassador Extraordinary and Plenipotentiary of the Argentine Republic to Ukraine Elena Letisia Teresa Mikusinski presented the scientist to the Igor Sikorsky Kyiv Polytechnic Institute. It was her first visit to the university, so the lecture was preceded by a meeting with the university management. Among the issues discussed during the meeting were the organisation of a joint Ukrainian-Argentine Center based on the Igor Sikorsky Kyiv Politechnic Institute, which could play the role of a certain cultural and educational bridge between our countries.

Pablo Goldschmidt was born in Argentina, graduated from the National University of Buenos Aires (where he studied at two faculties - pharmacy and biochemistry and philosophical (majoring in psychology) and has worked in France for many years. He is one of the invited experts in the National health care provider of France and the World Health Organisation, a volunteer of the public organisation "Ophtalmo sans frontieres / Borderless Ophthalmologists", which conducts epidemiological surveys, treatment campaigns, linichni testing and so on.

Pablo Goldschmidt is not only a virologist whose name is well known in the industry. He is also a Doctor of Molecular Pharmacology at the University of Pierre and Marie Curie (Paris VI), a biochemist specialising in pharmacokinetics, clinical pharmacology and pharmacology of antimicrobials, as well as a great promoter of science, and even an interesting prose writer. His lectures and a book on bacteria, viruses, fungi, amoebas and prions are those "invisible" creatures that, on the one hand, can cause terrible diseases, and on the other, are indispensable elements of the process of making bread, cheeses, chocolate, and fermented beverages and medicines, etc. - are of interest to listeners and readers of any degree of readiness - from people who are just interested in science to professionals working in certain narrow fields of microbiology.

AHowever, Pablo Goldschmidt's lecture at Igor Sikorsky Kyiv Politechnic Institute was designed for a more prepared audience. As a developer of a number of tools for the diagnosis of infectious diseases and an active participant in the development of new therapies for eye diseases caused by conventional and non-traditional infectious agents (including drugs, fluids and tissues), he spoke about modern equipment and methods for detecting bacteria, viruses and free-living diseases in the practice of ophthalmology. He paid particular attention to research into the occurrence of eye diseases in people using contact lenses and the relationship of these diseases to water treatments in thermal waters, which are a beneficial habitat for amoebae and other microorganisms. This is very important, because the correct determination of the causative agents of these diseases determines the right choice of tactics for their treatment.

After the lecture, there was a lively discussion during which Pablo Goldschmidt answered the questions of both the university staff and his students.