The anniversary of the Department of Acoustic Engineering and Information Registration 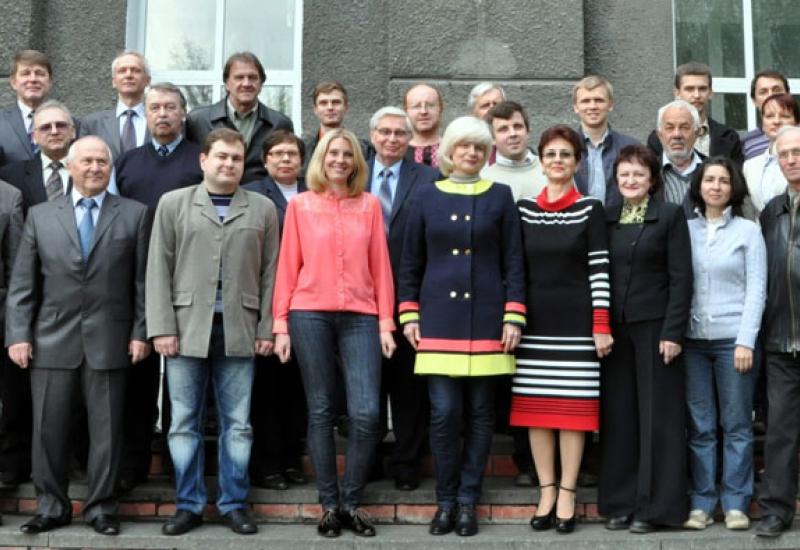 In 2014 the Department of Acoustic Engineering and Information Registration celebrates the 60th anniversary as a part of the Kiev Polytechnic Institute. The department was founded in September 1930 as part of the Kiev Institute of motion-picture engineers (KIMPE). The first name of the department – "Department of cine technique", the first Head of Department – Oleksiy Ball, known among experts as the inventor of the latest at the time instrument of acoustic cinema – "Ball's acoustic block".

In 1954 KIMPE joined "KPI" as the Faculty of Cinema Engineers. In 1957 it was reorganized into Faculty of Electroacoustics. The department was headed by Boris Natarov – a known expert in the field of large format cinema and stereo sound. In 1975 Oleg Yanushevskiy became the Head of Department who initiated scientific research on actual directions of magnetic recording technology.

In 1980 Professor Valentin Abakumov was elected as the Head of department. During this period, scientific and pedagogical schools in the fields of recording and reproduction of sound for cinematography and widescreen cinema; measurements in channels of analog and digital magnetic recording; power supply of electroacoustic equipment and electromagnetic compatibility continued to work productively at the department.

A new direction associated with research in the field of TV and video equipment was formed. The material basis of the educational process was enlarged with a complex of professional hardware equipment of telecentre and one of the most productive computers of that time – CM 1420. The branch of department is organized in the scientific-production association "Mayak" – a place of work of many graduates. The department received its current name – "Department of Acoustic Engineering and Information Registration". The scientific potential of the department was strengthened by prominent scientists – professors, doctors such as Yuliy Grygorovych Savchenko, Grigoriy Ivanovich Kornienko, Volodymyr Petrovych Peshkov. For their scientific achievements, staff of the department was awarded the State Prize of Ukraine in Science and Technology in 1989 (prof. G.N. Rozorinov prof. V.G. Abakumov), Lenin Komsomol Prize in Science and Technology in 1985 (associate professor V.S. Lazebnyy) with gold, two silver and several bronze medals of the Exhibition of Achievements of National Economy of the USSR.

After Ukraine became independent Department initiated and organized the creation of a number of modern engineering specialties, as well as Scientific Research Institute of audio and video equipment (SRI AV).

In the early 90's the department set up a specialty "Systems and complexes of radio communication, broadcasting and television", which, in accordance to changes in the sectoral structure of the training of specialists in Ukraine, was later transformed in two specialties – "Telecommunication systems and networks" within the academic program "Telecommunications" and "Video, audio and cine technique" within the academic program "Acoustotechnology".

In 2005 Professor Mykola Petrovych Makarenko became the Head of department and                 in 2007-2009 this position was occupied by Professor Volodymyr Volodymyrovych Pilinskiy.

This allowed the department to pass the accreditation of specialties "Telecommunication systems and networks" and "Audio, video and cine technique" successfully in 2013.

This perspective vision of prof. H.G. Vlasyuk of the directions of educational and scientific development of the department has given impetus to open a new specialization "Multimedia Telecommunication Systems and Networks", which harmonizes the efforts of specialists in both specialties of the department.

The department has significantly modernized the learning process and updated material resources, including upgraded existing and new equipped computer labs, the introduction of advanced specialized software. The Department is the initiator and organizer along with State University of Telecommunications of the annual inter-university scientific and practical conference among students, postgraduates and young scientists "Current state and tendencies of development of telecommunications".

In order to improve professional training and strengthen the pedagogical work among the students, the Festival of amateur short films is held at the department since 2010. To improve practical training of the academic program "Telecommunications", the department received a permission to operate an amateur radio station (call sign - UT4UYT), which started to work in 2014.

During its existence the department has educated several thousands of highly qualified specialists – employees of a film network, electrical engineers in "Acoustic Engineering", "Techniques of magnetic recording," operators for cinema and television centers, from 1985 – in the field of radio communications and systems. Our graduates work successfully in almost all broadcasting companies of Kyiv and regional cities of Ukraine, enterprises of the leading providers of telecommunication services, in public and private institutions on designing, development and exploitation of audio, video equipment, telecommunication, radio-electronic equipment of wide application. Graduates of the department are scientists and leading specialists of world famous companies, corporations, state-level administrators, businessmen (top managers) who were acknowledged, particularly in such countries as the USA, Israel, Canada, Germany, Hungary, and Russia.

During the last 20 years, the department has educated more than 100 bachelors, specialists and masters from 16 countries of Europe, Asia, Africa, Latin America, who productively work by a speciality in the field of telecommunications in many countries. For international students teachers of the department in 2002 first at the Faculty of Electronics began to study in English.

Teachers and staff of the department constantly endeavor for improvement and didactic support of the educational process. During the years of independence, involving experts it was published over 30 textbooks approved by the MES of Ukraine for department specialties and related specialties in Ukrainian, Russian and English on paper and in electronic format. Among the publications of recent years can be noted the following: Among the publications of recent years the following can be noted: "Circuitry of electronic systems" in 3 books (2004), "High-speed fiber-optic communication lines" and "Theory of processes and signals" in 2 books (2007), "Digital processing of audio and video information in multimedia systems" (2008), "Electromagnetic compatibility of electronic means" and "Engineering graphics" (2009), "The theory of the processes in information systems" and "Automation and electric drive of the information registration technical equipment"(2010), "Nanoelectronics" in 2 books (2011), "Systems and devices of information registration" and "Technical electrodynamics and radio wave propagation" (2013).

The educational process is organized in such a way that the graduates of the department are ready for independent and responsible work immediately after graduating our university. Such level of training is provided by the introduction into the curriculum of the educational and qualification levels of Bachelor, Specialist and Master of the course projects and works of the major disciplines within the academic programs and also the introduction of modern computer means of simulation researches of processes and systems.

Creative learning process of students is provided by the qualitative and fundamental methodological guidance and materials. For each discipline specialists of the department have prepared a complete set of methodological support, which is constantly updated, taking into account the development of corresponding technical field.

Department pays a lot of attention to modern computer means as tools of professional activity. For the experts of the speciality "Telecommunication Systems and Networks" it is obligatory to be able to work with twelve special and professional software packages, but for the experts of the speciality "Audio, video and cine techniques" – with eleven.

For the participation in the international educational exhibitions teachers of the department for publishing of textbooks and manuals were often awarded gold medals and diplomas. In particular, Honorary Diplomas of the International educational exhibition "Contemporary Education and Career – 2013" (Kyiv, October 2012) awarded to the staff of department – co-authors of the textbook "The theory of the process of information systems", and co-authors of joint Ukrainian-Bulgarian monograph in 2 books "Nanoelectronics" at the International Exhibition "Modern educational institutions of Ukraine–2013" (Kyiv, 28.02– 02.03.2013) were awarded a gold medal. At the same exhibition for winning in the category "Use of IT-technologies in educational institution" educational digital lab developed involving the Department of Acoustic Engineering and Information Registration was awarded a gold medal.

With the participation of the staff of department over the past few years a number of research works was carried out, including the development of more than 40 National Standards of Ukraine harmonized with international and European standards.

Considerable part of developed standards regulates the activities in the field of telecommunications, including: ISO CISPR24. Characteristics of electromagnetic interference. Norms and methods of measurement; ISO EN 55013:1997. Norms and methods of measurement of radio interference characteristics of receivers and the connected equipment; ISO EN 50204:2003. Electromagnetic compatibility. Electromagnetic fields. Radiation from digital radio telephones. Testing on immunity.

The Department actively participates in international scientific collaboration, performing the research and development in cooperation with scientists from Bulgaria, China, Moldova, Germany, Poland and Hungary. Department prepares highly qualified scientific personnel. Young scientists finish postgraduate and doctoral studies. At scientific seminars of the department this year, listened to and discussed their report on the topic of dissertations and after completion of the meetings of the academic councils it is planned the presentation of 4 candidate and a doctoral thesis.

Tasks of the department for the coming years are clear and understandable: modernization and creation of new teaching laboratories using IT technologies, improvement of educational and methodical documentation and material resources, organization of studying of Ukrainian and foreign students in English, establishing training together with foreign university students to obtain dual- diploma by Master students and more. Congratulations to the staff of the Department of Acoustic Engineering and Information Registration on the occasion of the 60th anniversary as a part of NTUU "KPI" and wish them good health and success in the education of the experts, scientific and methodological work and talented students. We wish you inspiration!