From the History of Katyusha 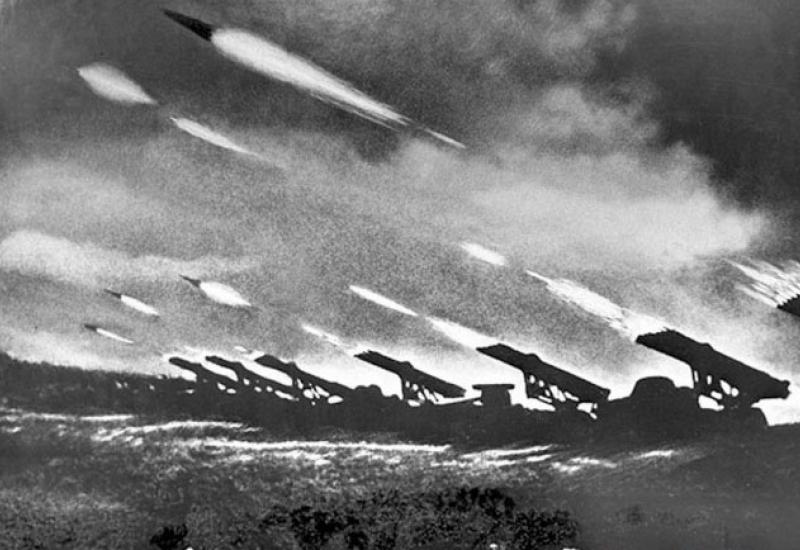 The most famous dangerous weapon of World War II Katyusha is a multiple rocket launcher (MRL). Many monuments were built to honor Katyusha; many writers and poets dedicated their works to it. It left a mark in history of war and of technology forever and ever. All the while hardly anyone knows creators’ names. The problem is that Katyusha was being created during a long period of time, by different inventors and collectives, and so to speak, in stages.

At the first stage was decided the key question of fuel generation for rocket missile. In this case it was colloid smokeless powder. At the second stage the missile was designed. The missile was made and tested before war but it was used on the aircraft to destroy aviation and ground target. A conclusion was made from the usage of the rocket missiles that there are not only benefits, these missiles have a lot of drawbacks. First and foremost it is an aiming problem: it was very hard to hit the target by a single missile. That particular question was decided at the third and the last stage. Inventors said that it was mission on the use. Consequently Katyusha succeed. First stage: central figure in this stage was professor of Mikhailovska Artillery Academy colonel Ivan Platonovich Grave (1874 - 1960). Despite the fact that the history began in 1884 when the French engineer Paul Vieille invented smokeless powder. The usage of this powder increased artillery missile’s range capability in several times. In 191 I.P. Grave managed to improve the invention of the French engineer: he got smokeless powder on another basis – colloid or gelatinoid powder which can form the core of different diameter and can handle on a turning lathe machine. This powder was used in sticks.

After revolution I.P.Grave left in the Soviet Union and on 5 November 1926 he got first Soviet patent on smokeless powder (№ 122, Reg. № 144/44). He got 9 patents, 7 of which were related to military equipment. But as a man who has aristocratic origins, further he wasn’t involved in practical work on rockets missile. I.P. Grave researched and in 1942 he was awarded the 1st degree Stalin prize for fundamental work Ballistics of Enclosed Space dedicated to rocket weapon. A reputable witness as Chief Artillery Administration (CAU) confirms that I.P. Grave made a great amount of work in the development of powder and missile for Katyusha. CAU made a conclusion: “Well, well! If there was no powder invented I.P. Grave, there would be no "Katyusha”! Second stage was performed in Gas Dynamic Laboratory (GDL) which belonged to engineer M.I.Tyhomyrov, one of the main designers of powder rocket. For the rest of his life (1930) M.I. Tikhomirov managed GDL. V.A. Artemyev was his sssistant, I.I.Kulahin worked with development of powder.In his team there were D.A.Venttsel, R.V. Bogomolov, G.E. Langemak, and in 1929 it was joined by B.S. Petropavlovskyy. In GDL the scientists developed and mastered the production process of propellent sticks, studied their ballistic capabilities. There were opened burning laws in the chambers of the nozzle, the first stages of flight tests were carried out.

The works on creation of missiles of various calibers, purpose and application were conducted in the lab. There were tested various versions of missile launchers: with the changed number and length of the pipes, the number of missile, the structure of powder and the most important stabilizers of missile-in-flight. Development of rocket missile with a calibre equal to 82mm and 132 mm began in 1930, and in 1932 were held flight design weapon delivery with missile this caliber. In the same year began works on armament aircraft P-5 and bombardment aircraft TB-1with rocket missile РС-132 і РС-245. In 1935 book N.E. Langemak and V. L. Glushko published a Missiles, Arrangement and Application. “Of course, machine does not require counterrecoil mechanism. This feature of the missile can be used in such devices that cannot withstand the impact inherent in conventional cannon, i.e. on aircraft, small boats, cars, etc. the main field of application of powder rocket is armament light military vehicles…” Not excluding use of MS from other vehicles, the authors preferred the aircraft. Summarizing the results of the second stage we state that work started by M.I.Tyhomyrovyy in GDL is completed by an outstanding engineers B.S. Petropavlovskyy, G.E. Langemak, V.A. Artemyev and others. They created powder rocket missile which are used in aviation.

Third stage. In March 1932 there was an extraordinary event that significantly influenced the whole subsequent course of research and development work of GDL and Moscow Reactive Motion Study Group (MRSG). While there was a reorganization of the Institute, gathered workers and designers, new departments and laboratories were created in the country. In 1937 the Head of the Institute I.T. Kleymenov and his deputy G.E. Langemak were arrested and soon executed. In 1938 V.P.Hlushko and S.P. Korolyov were arrested and convicted. Nevertheless the work at the institute continued. In 1937 B.M. Slonimer was appointed as the new Head of the Institute, and the chief engineer was A. G. Kostikov, who later held an appointment of the Head of the Institute.

In 1938 the GAU received project of multi-charged collective fire 24-missile setup, signed by the chief engineer of the Institute A.H. Kostikov and head of department of the Institute I.S. Hvay. Detailed calculations and substantiation were added to the project. GAU gave permission for testing and on 1st November 1938 setup made the first volley. Chief GAU highly appreciated new weapon. Lately, in 14 February 1939 A. G. Kostikov wrote in staff report: “In the second half of 1938, thanks to a successful combination of gas shell with salvo battery charger installed on the car, there has been a broad way and very effective use of rocket missiles in ground conditions”. June 17th, 1941 A.G. Kostikov demonstrated the work of CCS to Politburo government members.

June 21, 1941, the last pre-war days, CCS was made operational. CCS trial by fire took place in Orsha on July 14, 1941. 7 CCs were participated; and 5 of them were development prototype and were taken from the workshops of the institute. Later Moscow factory "Kompressor" will be the head factory for their serial production.

In March 1939 I.S. Hvay, A.G. Kostikov and V.V. Aborenkov sent application request on salvo firelaunching vehicle to the Department of Inventions People's Commissariat of Defense and got invention certificate. Katyusha succeed! Two of three project owners are Ukrainian, our countrymen.

I.S.Hvay (1905-1969), chief of department solid-propellant rocket engine, was born in Dnepropetrovsk in the family of railman. In 1923 he graduated Dnipropetrovsk Railway Technical School, a year later entered to the Dnepropetrovsk Institute of Railway Engineers. After the third year, as the best student, he was sent to the Leningrad Electrotechnical Academy. After graduation the Academy he worked in GDL, and later - at Rocket Research Institute. In 1942, without thesis defence, he received the Stalin Prize. When the Higher Attestation Commission asked I.S. Hvay: “Where is your thesis? We do not have it ", the answer was: "Shoot at the front! "

A.G. Kostikov is a graduate of the Kiev military engineering school in 1926, Hero of Socialist Labor, member of the Academy of Sciences, winner of the Stalin Prize 1st degree, major general of aviation engineering service. Was born in October 30, 1899 in the town Kozyatyn Kiev province. At the age of 19 he was at war in the Red Army, was wounded and taken prisoner by the White Poles, but escaped from there. Was sent to the 3rd Kiev military engineering school. In the spring of 1930 he entered the Air Force Academy named after Zhukovsky, from which he graduated in 1933. Seven graduates of the academy, including A.G.Kostikov, were directed at Rocket Research Institute. Since 1936 he had been a section chief of jet engines. In 1938 A.H. Kostikov was appointed as chief engineer of the institute, and later he became the Head of the Institute. In a letter to ICG CPSU(b) A.G. Kostikov proved the sentence: "... in the present research work in the field of jet engines showed a real opportunity of developing aircraft, to make it move faster in 1 ... 5 min at speed which would exceed the sound…” In July 26, 1942 was issued a decree of the State Defense Committee that Institute had to develop a jet fighter-interceptor in a short term. The Institute lead by A.G. Kostikov took the work in the design, construction and ground processing in conditions of war was allocated less than eight months.

In autumn 1943 was built the first example of the aircraft, but the line set by government was disrupted. February 18, 1944 A.G. Kostikov was dismissed and then arrested. Eight volumes of the criminal case. Interrogation, accusations of spying and sabotage. Conclusions anonymous reviewers: "Explanation of the author ... true. The author should be used in more depth development.” In February 28, 1945 he was released from custody. The decision about end of investigation noted that “… there were no hostile intentions in the A.G. Kostikov actions, who was a great expert of the business." Five years of his life (he died in December 1950), new works, students were ahead. But there was also a deadly wave of dirty foam. A.G. Kostikov was accused of arrest S.P. Korolev and V.P. Glushko.

To clarify this and other similar questions in 1989 a special commission was appointed. The main conclusions of this commission: "Prosecutorate for the USSR №13 / 4-1032 of 12.06.89 confirms that there no data confirming S. P. Korolev, V.P. Glushko were arrested on a denunciation of A.G. Kostikov ". His invention certificate on CCA also came under attack. This question was also discussed by the Commission. And there are its conclusions: "Our committee has studied hundreds documents related to this case.

The conclusions are unmistakable: author of invention mechanical setup for salvo fire rocket missile and authors of new weapons - multiple rocket launcher system are is A.G. Kostikov, I.S. Hvay and V.V. Aborenkov. We didn’t find a person who could reasonably qualify for including into part of the authors.”

Unfortunately, we didn’t find reliable information about the third participant and the author of multiple rocket launcher system V.V. Aborenkov. We know that he was commanding the Guards rocket units "Katyusha" during WWII.

In conclusion, we express our hope for openning a memorial plaque in MITI on the house where studied A.H.Kostikov. So we can confidently say: "Nobody is forgotten - nothing is forgotten!"