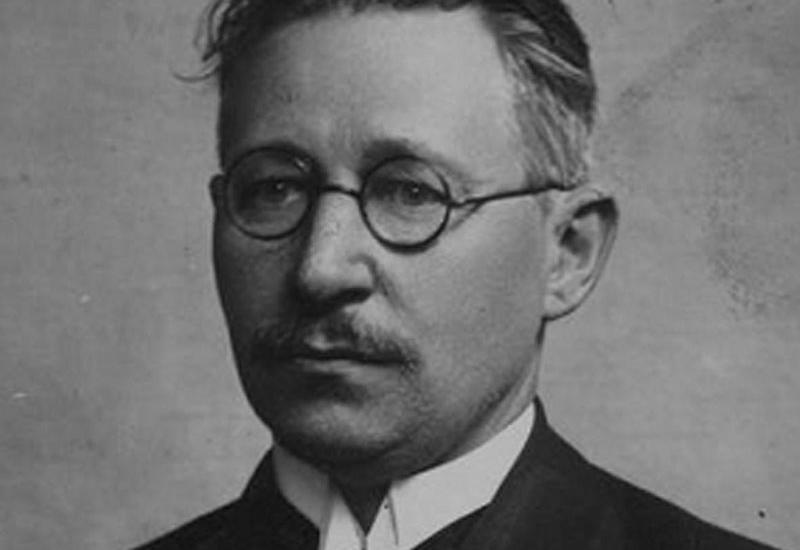 I remember in the summer of 2010 we talked with the rector of the Kiev Politechnics Michael Zgurovsky to perpetuate the memory of the great polish scientist and public activist  - the KPI graduate  - Wojciech Svyentoslavskyy on the territory of "KPI". I proposed a low-budget option - to establish a memorial plaque. But Michael Z. said that for university the figure of Wojciech Svyentoslavskyy is equivalent to outstanding personalities, monuments of which are set in the alley behind the main building, so that's why it is also worth of this honor. So, I had the honor to be part of the concept of the monument construction.

August 30, 2013 I once again felt involved in important event when I along with other guests from Poland took part in the inauguration of the monument to the great scientist in a gloomy rainy day. All speakers emphasized the contribution of Wojciech Svyentoslavskyy to international scientific cooperation. He proved in practice that the great discoveries and inventions arise when a talented researcher draws upon the achievement of others and develop them, and this is only possible on an international scale. Wojciech Svyentoslavskyy, who conducted his research in various scientific centers of Europe and America, became the best example of this approach to science.

While standing near the monument and looking at the bronze face, perfectly reproduced by Mykola Oliynyk, I recalled my meeting with the professor. It was in September 1966. At that time in Warsaw the congress of graduates of KPI was held. Wojciech Svyentoslavskyy was one of the organizers. Over two years he, unfortunately, passed away. Stanislav Hzhimalovskyy, who together with Wojciech Svyentoslavskyy created a group of KPI pupils in Warsaw in 1922, and after the war in 1957 restored the organization called "Section of KPI pupils" also passed away. Wojciech Svyentoslavskyy participated in the activities of the Section. In the chronicles of Section May 18, 1958, which was commemorated to the 60th anniversary of the Kyiv Polytechnical Institute in Warsaw he can be viewed on its collective shot near erstwhile head Stanislav Hzhimalovskyy.

Wojciech Svyentoslavskyy was undoubtedly one of the most famous Poles connected to the Kiev Polytechnic Institute. Among the 14 graduates of before World War II period, information on which is contained in a multi Biographical Dictionary of polish technicians, he is the most famous person.

Wojciech Svyentoslavskyy (21.06.1881-29.04.1968) graduated KPI in 1906. He lived in Kiev, Moscow, Warsaw, Pittsburgh, Iowa City, and in Warsaw again. He was a laboratory assistant, associate professor, Doctor of Chemistry, professor. He worked as physicist-chemist - researcher in the field of organic chemistry as a specialist in thermochemistry, calorimetry, ebulliometry, cryometry. In Poland he served as rector of Warsaw University of Technology, minister, senator. He was a member of many Polish and international scientific communities. He trained more than 20 professors and about 100 doctors. He had 380 professional papers, received 46 patents to be awarded, has many Polish and foreign awards. Seven universities awarded him an honorary doctorate.

Wojciech Svyentoslavskyy was an outstanding Polish scientists. It is hard to find an example of such dedication and prolific scholar in the history of exact and natural sciences, especially when bring to notice the most difficult periods of his life, two world wars that destroyed the research base that the scientist had to create over again. Svyentoslavskyy was dedicated to work as to the highest duty of man towards the society. More than half a century he served to science. His constant aim was the  development of chemistry. The scientist was able to implement his scientific ideas by using simple means. He was persuasive, persistent, even stubborn when it concerned the scientific truth. However, he was modest, direct and friendly to his colleagues and the environment.

We will remember Wojciech Svyentoslavskyy as a creator of advanced research methods in physical chemistry, inventor of instrumentation, university teacher and public figure, open to broad cooperation, who has always emphasized his gratitude to his native Kiev Polytechnics.