It was reported in the newspaper of KPI " Soviet engineer" in 1957 that the on the 11th of August, the opening of the institute's sports camp "Pine" was arranged near the town of Ukrainka on the right bank of the Dnieper-Slavuta in a pine grove, which was built under the direction of then-head of the Department of Physical Education Sergei Ivanovich Kalenchuk. There were buildings, tents, wooden houses, leisure center, sports fields and sections. It was noted that during the first year this camp admitted more than 1,500 KPI students and students from Moscow, Leningrad, USA. As it was noted in the newspaper, it is easy to breate in the camp “Sosnovyi”, time flies fun and placidly. In the 70-80s of the last century a lot of faculty staff with families stayed here in wooden houses. The camp went straight to the bank of the Dnieper, there had not yet been Kanev Reservoir dam. There was a great fishing place. Yes, the Dean of the Faculty of Chemical Engineering D.D.Ryabinin caught fish on wheat using the rod, and Associate Professor of the Faculty of electro H.S.Veksler – using spinning. Those who were having rest here those years, remember the directors of this sports camp – who are I.K.Pohurk, V.M.Mischenko, P.A.Usachov and others.

In the 90's camp almost stopped to exist. The rebirth on a new qualitative level, it received on the 14th of July 2008. The area of 5 hectares was occupied by "Sosnovyi", with the assistance of graduate faculty of heat engineering of KPI, chairman of the City Council of Ukrainka Pavlo Kozyrev Genrikhovich it was assigned to lifelong use of NTUU "KPI". Now here everything is built almost from scratch. Four stationary campuses, three of them for the tourists and four are for the staff, medical, technical services are built with white brick. They also constructed dining building, which can cater for up to 200 people, leisure centers, and sports’ grounds. Rooms in buildings can cater 2-3 persons. It was created a comfortable environment: a bathroom, hot and cold water.

The territory of the camp directly adjoins Sosnova street of the Ukrainka city. All the camp is good landscaped; it has paved paths, installed and painted wooden benches, installed lights, planted flowers, cleared bushes and trees in the area. Besides pines deciduous fruit trees grow.

On the Dnieper one can find a comfortable beach, cleared bushes, places for swimming in the river. It is cozy here, Dnieper breathing is fresh, and birds are singing. Fans of fishing can have fun in Stugna and Kozynki. 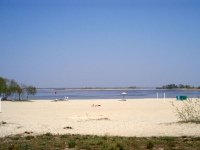 To create a library of camp Associate Professor M.M. Kobak gave his library called "Soviet detective". Today, with the initiative of trade union, library of H.P. Mezhevych and the Deputy Director of the Library V.M. Volynets the best works of art for the library "Sosnova" with books transferred to the library as a gift from the parents of the former library employee Joan Alexandrovna Habinskoyi are selected. It should be noted such innovation as "Holiday Weekend": If you wish you can come here on Saturday or Sunday and have a rest in the camp. This service costs 32 hryvnia per day.