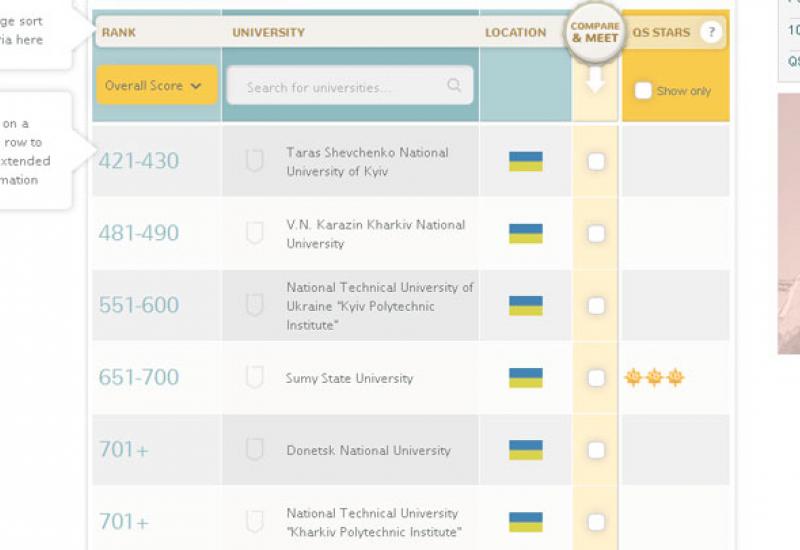 Results of the international rankings of higher education institutions QS World University Rankings® 2014/15, which determines the performance of the universities in the world by major academic performance were unveiled. Rating World University Rankings is published the eleventh year in a row and has a world-wide recognition as a tool for evaluating the quality of university education.

The rankings developers use a few basic criteria of an institution: a reputation in the academic world, quoting scientific publications of university representatives, the ratio of teachers and students, the attitudes of employers to the graduates, as well as the relative number of foreign teachers and students. More than 800 universities in the world are included in the rating list QS World University. In this year's ranking includes 6 Ukrainian higher educational institutions.

In particular, according to the rating of World University Rankings-2014 Taras Shevchenko National University of Kyiv became the first in this list among all Ukrainian universities, in the category of 421-430 (previous year: 441-500), in a company of the German Leibniz Universität Hannover and North Tulane University.

Another Ukrainian university, included in the top 500 of the prestigious world ranking for the first time in its history was the V.N. Karazin Kharkiv National University, receiving position from 481 to 490. There are also in this interval the American University of South Florida, University of Vermont, and the Belarusian State University.

Rankings for the first time takes into account indicators of Sumy State University, which is located in category (651-700).

Also the QS World University Rankings-2014/15 is added by Donetsk National University and the National Technical University "Kharkiv Polytechnic Institute", which was first included in the world ranking. These educational institutions are located in the category 701+.

The first place in the world rating list, as in the past, was given to the American Massachusetts Institute of Technology. British University of Cambridge was ranked second in the global top ten , third - Imperial College London.

In general, American and British educational system, with 28 and 19 representatives in the top 100 of the world rankings remain traditionally the world leaders in terms of university education .

According to the materials osvita.ua