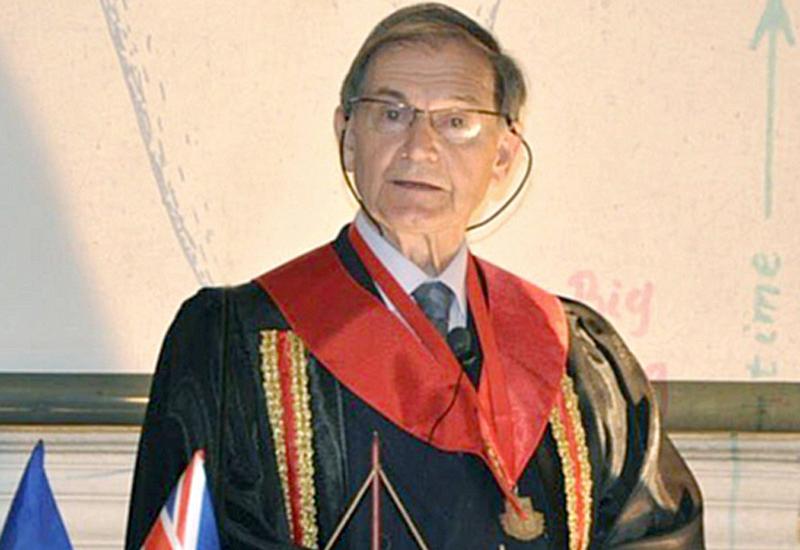 On October 6, the Nobel Committee announced the decision to award the 2020 Nobel Prize for Physics.  This year, it was divided between three scientists, whose discoveries, according to the Nobel Committee's website, concern the problems of "one of the most exotic phenomena in the universe - black holes."  Half of the prize went to the prominent British theoretical physicist Sir Roger Penrose - "for the discovery that black hole formation is a robust prediction of the general theory of relativity described by Albert Einstein". The second half was awarded to the German astrophysicist Reinhard Genzel and the American scientist Andrea Gez - "for the discovery of a sufficiently compact mass in the center of our galaxy."

The decision of the Nobel Committee to award Sir Roger Penrose to Kyiv Polytechnic members is especially pleasing.  After all, he is an Honorary Doctor of our university. Rector Mykhailo Zgurovsky presented Penrose a diploma, mantle and commemorative badge of the Honorary Doctor of Igor Sikorsky Kyiv Polytechnic Institute at a solemn meeting of the Academic Council of our university, which took place on October 30, 2012.  That day, after the ceremony, Sir Roger gave a lecture on "Seeing Signals From Before the Big Bang?" devoted to the problems of cosmology and astrophysics.

The lecture aroused great interest in the academic community of Kyiv. Not only members of Igor Sikorsky Kyiv Polytechnic Institute attended the meeting, but also representatives of other Kyiv universities and research institutions - scientists, teachers, graduates and students.  That day the meeting room of the Academic Council of the university could not accommodate all those who wanted to listen to the famous scientist, and many watched its live broadcast in the Great Physical Lecture Hall in the first building of our university. The things the British scholar was talking about were quite difficult to understand, but he taught them in such a way that it was clear even to not-so-prepared participants.  Everyone can find the text of the lecture translated into Ukrainian by PhD in Physics and Mathematics, translator and writer Maksym Strikha (with his notes and afterword) at: https: https://readymag.com/kis/penrose.

It is worth mentioning that Sir Roger is still working on the issue, which he lectured - he spoke about it in a telephone interview he gave after the Nobel Prize ceremony (https://www.nobelprize.org/prizes/physics/2020/penrose/interview/).

The awarding of the Nobel Prize is an extraordinary event and always attracts great interest to the winners.  Roger Penrose (born on August 8, 1931) deserves it totally.  So let's get acquainted with him and his scientific work more closely.

He is one of the most famous scientists of our time, a member of the Royal Society of London, an Honorary Professor of Mathematics at the University of Oxford, where he headed the Oxford Mathematical Institute in 1973-1998.

Roger Penrose has been awarded many prizes and medals for his contributions to science. Among them there are the Eddington Medal (along with Stephen Hawking), the Dirac Medal, the Albert Einstein Medal, the Hermann Helmholtz Medal, and the Karl Schwarzschild Medal. In 2008 Penrose was awarded the most prestigious award of the Royal Society of London - the Copley Medal which was first awarded in 1731. It is given for achievements in any science - physics, chemistry, mathematics, biology, medicine and others - only to one scientist per year. In due time B. Franklin, F.W. Herschel, A. Volta, M. Faraday, C.F. Gauss, Ch. Darwin, H. Helmholtz, R. Clausius, K. Weierstrass, D.I. Mendeleev, I.  Mechnikov and other world-famous scientists.

In 1994 for outstanding achievements in the development of science the Queen of England granted to Roger Penrose a knighthood (hence prefix "sir" in his name).

The main field of Penrose’s research is the theory of relativity and relativistic cosmology. He invented the twistor theory, which combined mathematical knowledge of special relativity and quantum mechanics, formulated weak and strong versions of "censorship hypothesis" concerning the possibility of observing certain space objects, and the idea of ​​spin networks, which was used to describe the geometry of spacetime in loop quantum gravity.  In 2010, he published the book "Cycles of Time: An Extraordinary New View of the Universe", in which he set out his theory of conformal cyclic cosmology, according to which the Big Bang repeats an infinite number of times.  He also developed his own version of the quantum mechanics interpretation.  He also wrote a very thick (about a thousand pages) book "The Road to Reality: A Complete Guide to the Laws of the Universe" (2004), which examined the fundamental principles governing natural processes, analyzed the relationship between Mathematics and Physics in search of a better theory to describe the universe.  also modern theories  - the theory of supersymmetry, the string theory, the twistor theory, etc.

For years Penrose has been working on the problem of the essence of thinking. In 1989 he published the book "The Emperor's New Mind: Concerning Computers, Minds, and The Laws of Physics". In it, he explained the idea that known laws of Physics are inadequate to explain the phenomenon of consciousness that the human brain is fundamentally different from the most complex computer.  Based on the ideas of Gödel's incompleteness theorem and Turing's halting theorem, Sir Roger argued that mathematical thinking and mental activity in general could not be described by a "computer" model of the mind.  He also argued that the modern physical picture of the world has a significant "white spot" - there is no "bridge" between the submicroworld of quantum mechanics and the macroworld of classical physics. The book provoked a stormy reaction. Penrose’s conclusions and arguments have been widely criticised in numerous articles. He has been accused of trying to prove that human thinking cannot be based on known scientific principles. Sir Roger responded to the criticism with "Shadows of the Mind: A Search for the Missing Science of Consciousness" (1994), in the first part of which he considered the thesis that human consciousness is non-algorithmic, in the second part - subjects of physics and biology necessary to understand the functioning of the real brain.  That year, together with the American anesthesiologist, neurobiologist, professor of the Center for Consciousness Studies of the University of Arizona Stuart Hameroff, he developed the quantum non-computable theory of Hameroff-Penrose, in which brain activity is considered a quantum process.  These problems are still actively discussed by scientists around the world.

We should also mention the very interesting results of Sir Roger's mathematical investigations, which were called "The Penrose triangle", "The Penrose stairs", "Penrose tillings".  However, it is worth talking about them separately, which we will do in one of the next issues.