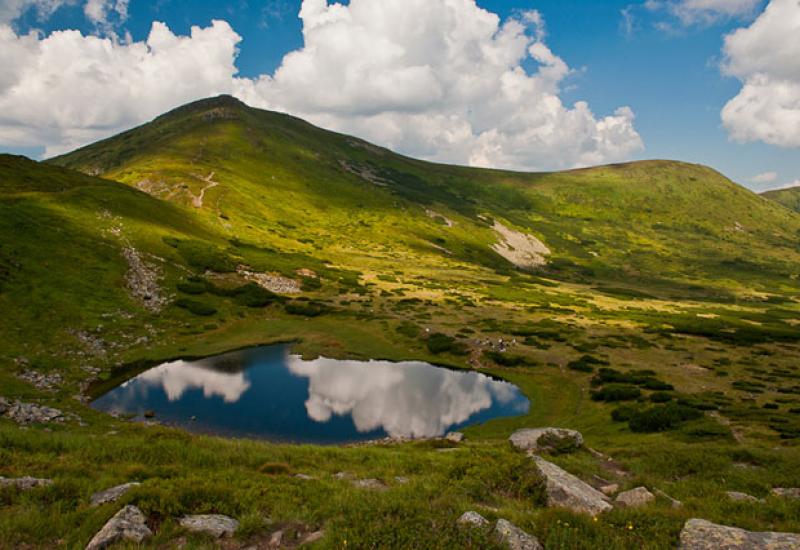 Ukrainians are in love with beautiful  apparently genetically. A mysterious both attracts and  terrifies any person. So visit the picturesque alpine water body, covered with legends and traditions - Lake Violent, dream of every traveler. This mysterious depression is located at the height 1750 m on the hillside Turkul (Montenegrin ridge).

It has a  length 88, width 45, depth 1.5 m and form somewhat resembles Antarctica. It feeds by an atmospheric precipitations,  it winter it  freezes.  This locality was always on the verge: before  European states (there are border posts are to this day), and now between the Transcarpathian and Ivano-Frankivsk regions.

There is no mountain tops, or reservoir, which would not be connected with at least one legend. And  Violent  is the most  mysterious Carpathian lake.  Whatever puckered skeptics, but something is still there, the people say.

So, the first tale: a place where a hail  born. Hutsuly believe that the souls of sinners (suicides or killers)are going to the lake. And if you throw rocks at them, that is to excite the surface, then a rider jumps on and prances around rocks, carving stones, turns to ice. Then from the lake sinners emerge  and collect this ice and fly away on black clouds and after  untie the bags with the ice and  a hail falls.  Second tale: once upon a time in the lake a young girl drowned, and she is very angry if someone bathes in it. He who dares, be sure to receive a "gift" to the bad weather. Third tale alleges that night around the lake  souls of suicides  dance and that can filch to the bottom those , who fall into their hands. The only thing that will save us from the evil spirits - the sound of trembitas. And they say also, if somebody unmarried  will wash up with  lake water  then during the following  year he(she) will  find a mate (well, at least something nice should inspire travelers).

And we were there

To reach the lake is quite simple, some do it even with a beer. From Vorohty  go straight  towards camp site "Zaroslyak",  at the entrance to the reserve register at the control check point (by the way,  it is near the Camp KPI "Globe"), pay a fee, then go another 8 km by  horrible road to the parking lot, which is the starting point of the climb. This place is smelled with barbeque  and sweat of those coming down.. Further routes diverge: right - everyone knows beaten-up trail to Goverla,  left - less popular,  to the Violent lake (more often  travelers visiting Lake  use  Chornohora traverse).

A climb takes more than three hours, if it is with someone who is constantly whining and stop the beat of the climb: "We are not there yet?" "Soon?" "Then I cannot", and less than three, when a group is  friendly and  fast. Summer landscape resembles a  bright kid’s kaleidoscope: first, pine forest, moist in someplaces, covered with emerald moss; numerous blossom fields, then zherep, variegated  streams  (crossed by wade or logs) and the scattering of stones, and on the sides - overgrown with blueberries, cranberries and raspberries. There is nothing tastier than eat berries straight from the bush. We smiling at each other with blue lips.

Last rise some of us  overcome  on the four, and the cross a viscous mud – on  three (tip: do not skimp on the good shoes). Suddenly we heard the neighing , until turned the heads - where is the horse, went to the lake shore. The heat was unbearable: virtually the entire group, removing sweaty clothes, climbed  silently into the cold water: nobody  squeal or spray: warily watched each other, so that no one will wish to disrupt local warnings (on the shore stood a poster asking to not excite the lake surface). Then sat and long admired the environment. It occurred probably the Violent is  a lover of the Montenegrin: subtly beautiful, cold minded, which  calms, attracts and fascinates, if you look deep in her blue-green eyes.