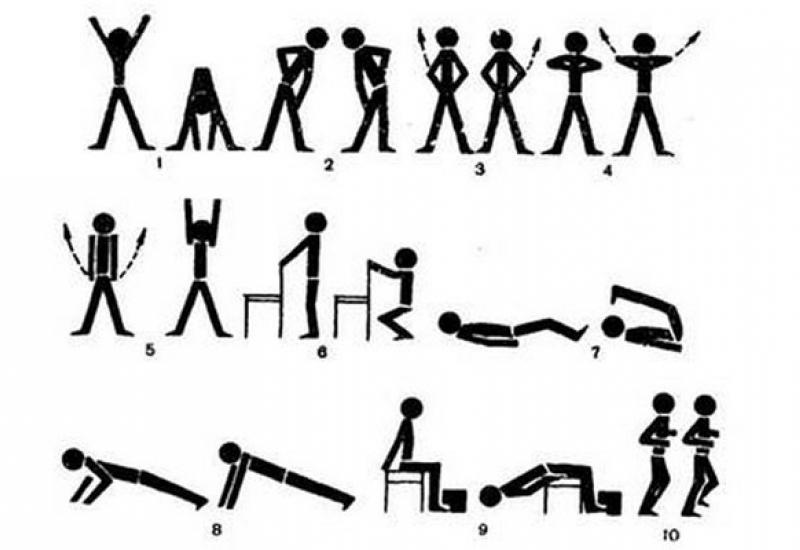 NTUU "KPI" not only honors the memory of this extraordinary man but also lays a brick in the development of the cause to which he devoted his life – the help to the sick through the creation of new biomedical engineering. The Dean ICME- Professor, Doctor of Medical Sciences V.B. Maksimenko, is now deputy director of the Institute of Cardiovascular Surgery named after N.N. Amosov AMS of Ukraine on scientific work.

However, N.N. Amosov was not only a doctor but also a passionate promoter of a healthy lifestyle. He even developed a system of wellness "1000 movement", which is popular today. head KPI health club "Academy of Youth" Lydia Bucki says about its main provisions.

N.N. Amosov grew up in a poor family. As he recalled, after 30 years, he started having serious health problems. He decided to overcome ailments with exercise. First he made 100 movements a day, but the effect of it was not enough. He increased load, began to walk, reached 1,000 movements – there were disappeared the disruptions in the heart, the pain in the back. Soon he "mastered of himself" completely. From long-term experiments on a system there was born a system "1000 movements."

One need to set goals and make a decision. Human health, according to N.N. Amosov, due to the mobility of joints, weight, quality of digestion, the ability to relax the condition of functional systems. The global goal of physical culture (FC) on Amosov, - improve "the level of peace of mind." Despite the benefits of employment FC, the author points out, most people evade them. The reasons are different: shyness, laziness, boredom, because the exercises - a repetition of movements. But health can not be obtained, making 5-10 exercises or walking 1 mile a day. However, it should decide – to be sick or " healthy and rich." Modest goal and available means - that's what you need to start.

To start exercising FC it does not always have to ask permission of a doctor. Everyone knows that classes FC strengthen muscles, reduce weight, maintain joint mobility, improve physique, increase breathing capacity of the lungs and others. But the fact that people generally do not engage in physical activity – it’s a guilt of the physicians who are often afraid FC. Get an experienced medical specialist for health, writes Amosov, almost impossible, they are not exist. Most doctors are the specialists in diseases. So do not go to the doctor when he takes FC. Dangers for the heart, according to him, when engaging FC can be avoided by following the basic rules. However, for people with heart defects, after a heart attack, hypertensive patients (with a pressure of more than 180/100), with severe angina medical consultation are still necessary. Those who have suffered rheumatism, has heart pain, suspected angina, high blood pressure light, in his opinion, as well as people over 60, your doctor's approval is not needed.

First, you must assess the initial level of your functional state. The most important step lessons FC Amosov considers the initial fitness test, which can be determined by the level of health of the cardiovascular system (CVS) and respiratory. Here are some of its practical recommendations.

A rough estimate - by shortness of breath when climbing stairs. Climb the 4-5th floor at a normal pace without stopping and check:  is it difficult to breathe. If you feel that there is a reserve, we can investigate further. If "suffocated", after a few hours  try again and count pulse. You should know your pulse at rest. The pulse in the "sitting" one can roughly estimate the state of  the heart. Men: 50 - excellent, 65 - well, 65-75 - acceptable, more than 75 - bad. The women and young men have on 5 hits more often. So, if after climbing to the 4th floor you have a pulse below 100 - excellent, below 120 - well below the 140 - mediocre, above 140 - bad. If your result is "two" – it is no longer need to research, you need to start training from scratch.

Next check - register the ascent on the 6th floor. 2 min after raising heart rate should return to normal. The norm  is  2 min of normal pace. If the heart rate above 140, not try - it is necessary to train.

To determine the fitness of the heart N.N. Amosov offered such samples.

1. Test with squats. Count the pulse (heart rate - HR). Slowly do 20 sit-ups, raising his hands forward and widely spreading his knees apart. Count the pulse. Exceeding the heart rate to 25% or less is excellent, from 25 to 50% - good, 50-75% - satisfactory and more than 75% - bad. Increase in heart rate and double the above indicates detraining and heart disease.

2. Test with hops - for young people and athletes. Count the pulse, then gently on the toes make 60 jumps, bouncing off the floor by 5-6 cm, again count pulse. Evaluation is the same as with squats. People with problems should first try HR with half load. If the pulse quickened by no more than 50%, spend the whole test. Fitness and body weight, according to N.N. Amosov do not have to change with age, because the basal metabolic rate is not changed to 70 years, the health standards for 30 and 60-year-old - the same! The only difference is the pace of training, because with age the protein synthesis is retarded.

The first thing to do -to train the heart, said N.N. Amosov. If there is a sick body, its reaction to the load is taken into account on a par with the heart or in the first place. This applies to selecting the type of exercise (developing joint after surgery, paralysis of the muscle training, etc.) instead of the load intensity.

The main provisions of Amosov are the increasing loads at improving training, restrictions on clothing and food. Training effect any exercise in proportion to the duration and severity. Excess stress, bringing them closer to the limit associated with the dangers of overtraining so - it is a disease. The power and duration of training have different effects that must be considered. The most important rule of training is a gradual build-up loads. Remember that exercise affect all organs and systems, but the training effect develops at different rates in different organs. Therefore, the rate of increase of loads and duration should be chosen with a margin and a focus on "slow" bodies. With a low initial fitness capacity loads - 3-5% per day, avoiding the upper limit. After reaching the highest rates reduces the load. Then the cycle repeats. Classes should be uniform, composed of the same type of repetitive movements, which can set the pace.

For the heart no matter what muscles work, the importance of the body's need for oxygen during loading and duration of exercise. Excessive force, as well as a significant duration of exercise for a weakened person leads to muscle pain. Amosov considers that pulse - a key indicator in training. Thus, in preparation 6-week course for people over 40, heart rate should be 130-100 beats in min.

1000 gymnastic exercises, plus 10 minutes of running. Gymnastics, according to N.N. Amosov, is lacking  power, but it is developing joints, strengthens ligaments and muscles, therefore it can be used to support joint mobility. The main condition of motion of the joints is "general health" that is sufficient backup operation of the internal organs. The movement is not able to completely prevent changes in the connective tissue fibers, but if they are stretched periodically and frequently, it saves the ligaments and tendons of the calcium deposits. What has already been deposited cannot be sucked, but to stop the process - in our power convinces the author. Let apply the simplest of exercises: "Let the man bends or squats, and give him the opportunity at this time to listen to the latest news, and do not remember," the and then moving ".

Amosov distinguishes three levels of healthy joints. The first - healthy. Second - up to 40 years when there is salt deposits, recurrent pain, limitation of movement (eg, radiculitis, diskosis, ischialgia) that disappear after treatment. There will only FC. Third - joint pain interfere with life and work (arthritis, arthrosis). FC is needed, physiotherapy, treatment with climate,mudbathes,  pressures and the like. One cannot reverse the disease. The only way to prevent diseases of the joints, according to N.N. Amosov, is exercise. The intensity of the movement for the joints is determined by their condition. For the prevention enough to make 20 movements, with the appearance of pain - 50-100, with obvious injuries - 200-300 on sore joints and a healthy 100. Movement should be done quickly - it loads the heart. From the fast movements with low load muscle endurance athletes, but their volume does not increase. Needed for muscle development and strength of the movement. But for the development of joint force does not replace the number of movements.

Amosov offers a set of exercises designed for the defective spine and to support hands mobility (terminology of the author): 1. In the bed, holding his back, throw your feet up to the shin getting a facial. 2. Standing, bend forward and touch the floor with your fingers or hands. 3. The rotational movement of the hands of the shoulder joint - onward and upward, then back to the maximum amount of traffic. The head is turned to the beat movement from right to left. 4. The bending of the spine to the side. Palms glide over the body and legs. One - down to the knee and below, the other up to the armpit. The head is turned from right to left. 5. Raise hands throwing palms behind his back to touch the opposite shoulder blade with simultaneous tilting the head forward. 6. The rotation of the body from right to left with the highest traffic volume. Fingers clasped at chest height and hands moving in rhythm with the body, increasing the rotation. The President returned to the beat of the general rotation. 7. Alternate maximum pulling the legs bent at the knee, to the abdomen in a standing position. 8. Bending the body lying on his stomach on the stool and legs hooked over an object, as far back - forward. 9. Squat holding hands on the back of a chair.

Each exercise is done 100 times as much as a fast pace. Complex duration - 25 min. The first and last two exercises to do at home, the other on the street, after running, plus 300 finger movements. The author points out that running outdoors can be replaced by jogging in place for 10 min. When the pulse to 130 beats. min. Should start with 10 movements and add 10 per week. You can add first 5 movements per week or 4 to 10. Running on the spot to start with 1 minute and add one minute per week, for 5-10 minutes. Mandatory classes are on Sunday and Saturday. Fitness level check should be carried out after the end of a six-week course.