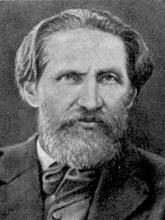 Victor L. Kirpichev (26.09 [08.10] .1845, Saint Petersburg - 20.10.1913, St. Petersburg) - Professor Emeritus, one of the greatest scientists and engineers, a talented engineer and teacher, organizer of higher technical education and a prominent social activist, founder and the first director of the Kiev Polytechnic Institute (1898-1902), Head of Department of Strength of Materials (1898-1903). Honorary Member of the Russian Technical Society, founder and chairman of the Society of South Russian technologies, then - its honorary member (1895-1898).

He graduated from Polotsk Cadet Corps (1862) and the Mikhailovsky Artillery School (1863). In 1863-1865 he worked in Kronstadt Academy (St. Petersburg). In 1869-1870 he taught a course strength of materials in this Academy, 1870-1885 - Course Applied Mechanics at St. Petersburg Technology (now - Polytechnic) Institute. In 1873 he had the Internship in Germany at the renowned physicist H.Kirhhof. From 1876 he was a professor. At the same time he was the Professor Petersburg Institute of Civil Engineers (1884-1885). In 1885-1898 he created and headed the second in the state Kharkov Technological Institute (now - HLI). In 1898, he was appointed director of the Kiev Polytechnic Institute. In 1902, for health reasons he resigned from his post as director of the Kiev Polytechnic Institute, but was elected its honorary director. The last ten years of his life he taught at the St. Petersburg Polytechnic Institute courses of applied and structural mechanics.

His main directions of scientific activity were: a study of the strength of materials, construction and technical mechanics, strength of machines and structures. For the first time in Russia he gave the most complete course on strength of materials and static structures. He developed a method of calculating the various statically indeterminate structures. His work on structural mechanics had no equal in the European scientific and technical literature for originality and expressiveness presentation. The idea of using the reciprocity theorem, together with the notion of generalized forces he adapted to construct lines of influence in a variety of problems relating to simple and a continuous beams and arches. He carried out experimental studies on the stress state in structural elements using polarization-optical method. He pointed to the promise of optical methods in the study of elastic deformations and manufacturing of machine parts, conducted research on fatigue of metals based on their crystal structure, discovered the law of similarity in mechanics.His purposeful vigorous scientific and organizational and social activities made a huge contribution to the engineering in this century in pre-revolutionary Russia, pointed the way for its further development, based on modern scientific and technological progress in Europe and North America.

The great merit of the scholar was in the establishing in the Kiev Polytechnic Institute of the first scientific school of mechanics in the field of dynamic and static strength machine direction, which played a significant role in the development of national science and technology.

In his successful teaching activities he espoused the principle of combining theoretical knowledge with laboratory sessions and practical training, at that time unusual. Much attention was paid to the development of future engineers skills for independent creative (inventive) work. In 1896, at the Second Congress of the Russian leaders on technical and vocational education he made the report "Experimental mechanics and mechanical laboratory in higher special schools." His ideas were brought to life at the Kiev Polytechnic Institute. In the autumn of 1900 after the construction of the main building he began organize the mechanical laboratory, under the Director of the Institute. He took an active part in the Commission's IA Vyshnegradsky to draft a comprehensive plan for the overall development of the industry and vocational education in Russia (1884), the Commission on the higher technical schools (1897), presided at the Second Congress of Mining, Metallurgy and mechanical engineering (1910). In 1893 – in the rank of the secretary of the expert committee of the World Industrial Exhibition in Chicago, he acquainted with American engineering plants.

Text: Who is who: A Handbook. Professors at the National Technical University of Ukraine "Kyiv Polytechnic Institute" .- K. Education, 1998.-155s.