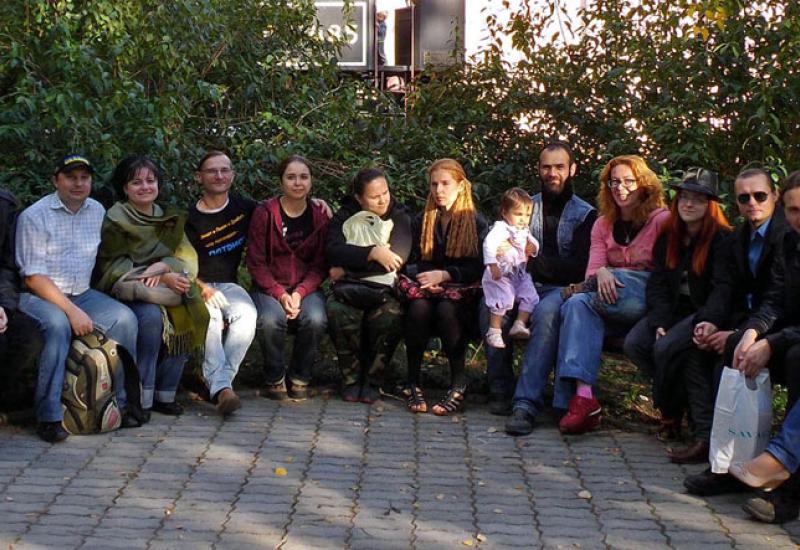 In June this year, the "Portal", club of science fiction fans (CFF), which operates on the basis of the Scientific and Technical Library of our university, celebrates thirteen years. During this time, there were many discussions of books and films, lively discussions on various fantastic topics, meetings with writers and other interesting people. But one of the main tasks of the club, in the opinion of its founders, among which was the famous fiction-writer, Serhii Diachenko and the editor of literary science fiction journal "Reality of Fiction", was the revival of the conventive movement in Ukraine (the conventions are called congresses of writers, fans and all other lovers of science fiction). And the club fulfilled this task. With the active participation of "Portal' members, about two dozen convents were organized and held, including two Pan-European Eurocons. By the way, some of the events of the second Kyiv Eurocon, held in 2013, took place in our library, and the library, as well as the entire university, made a very good impression on the guests.

But recently there have been much less conventions in Ukraine. Over the last year - only two (in May, the general pop-cultural ComicCon and the literary Literra - in autumn). Meanwhile, in neighboring Poland every year there are about fifty conventions. The largest of them - The Pyrkon festival of fiction - is held every spring in Poznan.

The festival takes place on the territory of the International Poznan Fair and is, in fact, a citywide event known to all residents regardless of the attitude to science fiction. Many fans come to the Pyrkon with sleeping bags and spend the night right on the territory of exhibition in a specially designed giant pavilion. However, they can't sleep much, because during the festival, twenty-four streams of various events are conducted simultaneously, with several streams round-the-clock. It is hard to come up with anything, somehow connected with science fiction, which could not be found in the program. Literary meetings, scientific lectures, films, contests, master classes, cosplay, anime, various games (computer, card, etc.), knight tournaments, separate zones for the fans of "Star Wars" , "Doctor Who", post-apocalypse and so on. The real land of miracles, because where else can you see the hobis, elfs, pokemons, aliens, wandering around the streets of the big modern city, and many others, for whom you won't get the name right now. And the most important is that the surrounding people perceive it as a normal component of urban life. It's worth seeing.

And after you feel the atmosphere of a three-day continuous holiday, there is a natural thought - try to repeat or even surpass it here. Moreover, there are preconditions for this: almost all convents in Poland are conducted in universities, and our university is one of the largest in Ukraine. Therefore, the prospect of KPIcon is not so fantastic. Of course, if CFF is strong. So, we want all students, who like such opportunities, to come to our club.