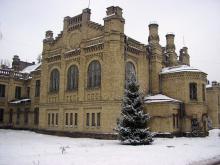 Trench preparational works for removal of excess soil layer of 2 yards (approx. 4 m) was completed in May 1898, foundational layings of the chemical Pavilion on the 1 June 1898 was launched the construction of the Polytechnic Institute. In June 20, 1898 architect Kitner filed adjusted by the comments of the Construction Commission of the pavilion project with some changes of internal planning and increasing basement areas needed to accommodate the heating and ventilation devices, chemical compositions utensils etc.

Alterations also underwent architecture of facades. Excavation and construction works performed Kiev firm of Ginsburg, steam heating and ventilation organized a technical office of Moscow Trade House "B. Zaleski and V.Chaplin.”. In 28 October 1898 removed the wall of the building under the roof. In the composed act in the 2 of June 1900, in connection with the abdication of the construction manager Kitner, stated, that on the 1 of September 1899 year the building was put into exploitation. In 12 of September  1899 held its consecration. Construction of 153 meters length take in the plan 909.5 square meters. fathoms (4 093.7 sq. m), had a total area of rooms on all floors of 1,912.5 square meters. fathoms (8 606.2 sq. m). Originally in it housed all four branches of the institute and library. In 1901 all units except the chemical department, transferred to the main academic building.

During the 1st World War in the building was located pyrotechnic and rocket workshops of the Military-Industrial Committee. June 22, 1916 during the execution of defense contracts happened explosion and fire, that destroyed part of the building (completely rebuilt to February 1917). Since 1918 the room was liberated from defense enterprises. At the turn of 1920s, on the one of the facades line build on two-storeyed west bulk of the building (length approximately 115 m), in which housed the electrotechnical equipment factory. The new part, made in simplified architectural forms, for the proportions is fit with the characteristics of the original volume.

Historical part of the building - chemical Pavilion - depending on the relief has a height from two to two and a half storeys, with basements. Foundations of the construction and basement – from gray gnivanskyi granite, walls -  from local brick. In the basement and corridors is used a brick fornication. Ceilings of the large classrooms and laboratories of the ground floor is made of metal beams, the gap between is filled with  reinforced concrete slabs or small brick fornications. Lift slab of the second floor – through the wooden beams. Hipped roof – through the wooden timbers, tin cover. Symmetrical by a composition consisting of longitudinal carcase and perpendicular to it lateral wings and three rear buildings, in the centre of which is housed the audience, in the form of an amphitheater. Planning of longitudinal building is a corridor, one-sided; common-planning of side wings and rear buildings, where are placed large laboratories and classrooms. Linking between floors is performed by quarter-turn with winders stair of central and side stairs located at the ends of the longitudinal building. Another angular step stairs are contained in a bezel volume. Made in brick style with elements of Romanesque-Gothic architecture. Facades made in an open yellow Kyiv brick with tile grout and is used with a variety of brick decoration (hovels, sidelong crosses, dentels, сurb). The leading motive of division facades are marked with flat blades single window curtain walls. Placed in two tiers large bow-shaped windows separated with window sills with the square and corbel dentels. The main facade, which forms the court-Cour d'honneur, on the axis of which is placed pilaster side with arched entrance portal and triune two tier stepped gable, decorated  with faceted Gothic columns and lading triangular fronton. Similarly – pilaster side and lower stepped tweezers - marked side entrances and ends of cross wings, that play a role of composite emphasizes in the structure of facades. Side entrances is marked with pyramidal roofing towers. In the formation of distinct silhouette of the building also play a role architecturally designed pipes of ventilative hoods. Denticulated cornice with parapet completes the façade, the basis of the last serve column on prolonged interfenestral lesenes connected with balustrade. In general, for the exterior of the building indicated décor growth from the bottom up. Before flanks of the longitudinal building from the side of  the main and rear facades,  preserved small tent towers of eight air intakes. Interiors of rooms with the parade appointment have ceremonial outlook. Long corridors of the first and second floors offset with cruciform fornication on the supporting arches with the profiled imposts. The main lobby in the center is offset with flat ceiling on the sides – torispherical fornication. It match with double-height premises quarter-turn with winders stair, on both sides of which on the first and second floors - are the main aisles to the audience. On the second floor stairs from the aisle separated in form of the arcades. The lobby walls and stairwells rusticated, floors and granite staircase. Flight of stairs, which based on creeping arches are enclosed with laced metallic lattice. At the level of the  intermediate court wall of the stairwells is decorated with modern pictorial composition.

Large chemical audience is situated in the central transverse wing (area of ​​63 sq. M), occupies two floors. Overlap with gabel ceiling on open frames with metal bongs. Lighted by six upper arched windows cut through the eastern and western walls. On the second floor from three sides (except the south) belted with wooden  balcony-gallery on the wooden bracket frout with traces. Under the steep amphitheater with wooden benches is arranged room with a separate entrance. Architectural decoration focused on the audience divided into two tiers of the northern wall. Behind the lecturn of the teacher at the center - a decorative portal with lower rectangular niche for establishing a blackboard and lush completion in the form of stepped gabel, that resembles the gable of the main building façade. Fronton with round niche follows the gothic window-socket, decorated with arcature belt, filded panels and geometric-floral ornaments. On either side of the central portal symmetrical is made four rectangular portals reaching the level of the second and first floors. The total composition and the Romanesque-Gothic style of the north wall of the chemical audience is similar to the decoration of the physical audience of the main academic building of the institute.

The building of the chemical pavilion is an integral part of the ensemble of Polytechnic Institute, a perfect example of specialized educational building the late 19th century. 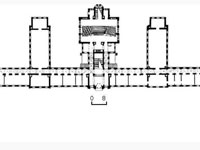 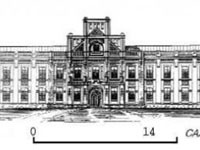 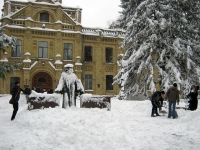 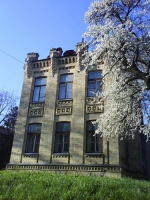 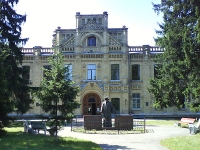