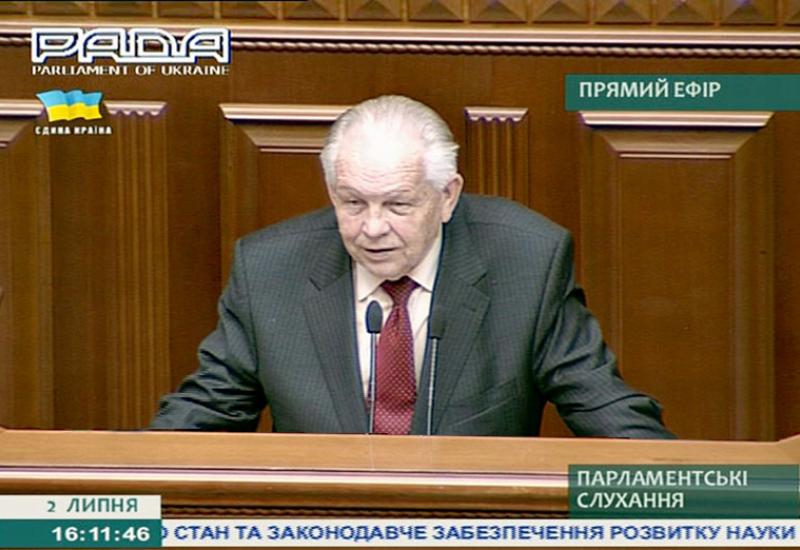 Speech NAS of Ukraine academician M.Yu.Ilchenko at the Parliamentary hearings on the topic "On the state and legislative support for the development of science and technology of the state," July 2, 2014

Dear participants of the parliamentary hearings!

1. Analyzing more than 20-year-old processes and the state of science of Ukraine, one can recall the warning words of the outstanding scientist Federico Joliot-Curie "Science is needed by  people. Country, where it does not develop, inevitably turns into a colony."

A clear illustration of state policy on the development of science is a continuous decrease in the percentage of its funding by eighteen governments of Ukraine. Therefore, the amount of funds allocated to science, contrary to the requirements of the Law of Ukraine "On the scientific and technical activities" is far away from adopted 1.7% of the gross domestic product of Ukraine. Now budget component of this funding is approximately 0.3%.

Evidence of the validity of the second part of Joliot-Curie warning about  the colony,  is the fact that in the global ranking of countries according to the share of products based on the use of innovation, Ukraine is now a neighbor of the African countries of Kenya and Botswana

I am convinced that the key reason for our scientific lag is that all these years the state policy was not based on the creation of conditions for the adequate development and relevance of science to the success of innovative development of the country. Today, under the conditions of the obligations resulting from the accession of Ukraine to the association of European countries, the continuation of such  policy contradicts common sense in terms of the need to ensure the security and defense of the country. After all, only relying on science could provide a basis for creating a competitive demanded in European countries products. It should be noted that the real, but an undesirable alternative to this could be the transformation of Ukraine into a raw materials appendage of Europe.

2. Science in universities is an important science segment of the state. scientific potential of Ukraine is focused in higher education - 68.9% of doctors and 72.6% of PhDs.

Mission and demand of university research in the successful development of the education sector and the state has its own specifics. It is associated with at least three areas of application.

Firstly, the high quality of education requires the use of the latest achievements of science in the formation of an adequate educational content. New textbooks, teaching aids, new specialty - this is the real introduction into the life of the scientific results which are obtained including scientific and teaching staff of higher education institutions.

Secondly, the demand for science in universities is dictated by the need to increase the scientific teaching staff, the activity of post-graduate training. Statistics show that in the direction of scientific training science in universities play a key role in the state, since the training of PhD students and 81% to 85% of graduate students is carried out in higher education institutions. And in terms of the new law "On Higher Education" these percentages continue to grow. By the way,  the positive experience of cooperation is joint scientific personnel training by universities and NAS of Ukraine institutes  on the basis of combining the strengths of each of the parties, as is the case, for example, in co-operation of Kyiv Polytechnic Institute and institutes of the Department of Informatics of the NAS of Ukraine.

Third, under conditions of adequate organization and adequate funding, science in universities is a source of acquiring new knowledge as a basis for the creation of new technics and new technology. It is these results, in turn, form the basis of innovative development of a competitive industry and the state's economy.

If there are in a university research schools, academic departments, staff researchers, the active participation of young people, then individual universities have demonstrated a world-class scientific results published in magazines such as "Nature". These universities annually receive State Prizes of Ukraine in the field of science and technology, prepare scientific justification for government decisions, create and implement innovative developments of national importance, etc. .. One of the examples of such advances in science in the universities is the event that took place on June 19 this year. For 10 days, a team of scientists of Kyiv Polytechnic Institute receives congratulations from domestic and foreign friends and colleagues on the occasion of the development and successful launch into orbit the first Ukrainian university nano-satellite "PolyITAN-1." (Applause). Thank you.

This international format satellite of  one kilogram with  dimensions 10x10x10 centimeters, was  created using the original results of scientific and technological achievements of Kyiv Polytechnic Institute in different areas - six departments worked on this project. Launch into orbit was done not for public funds. We are grateful to the Foundation named after Academician Michalevic for the financial support that enabled the launch in  practice. (Applause). Thank you.

Other examples of successful science projects at universities may be two developmental works of Kyiv Polytechnic Institute, accepted for service on orders of the Minister of Defense of Ukraine.

Systems of technical protection of information and cyber security, technical means of purifying drinking water from sources with varying degrees of biological and chemical contamination, technical solutions in the field of thermal energy utility systems, created by scientists of the University, are ready -to-use and are implemented in practice .

But these and many other scientific and technical developments of universities in Kiev, Kharkov, Lvov and other cities set up basically "not because of, but in spite of" the existing state of the state support for science in Ukraine. In particular, the level of state funding of  science in our universities is almost 200 (!) times lower than in leading foreign universities and teaching load of our teachers several times more. But overseas scientific load is approximately equal to the educational.

So what the Council of Vice-Rectors for Research  of Ukrainian universities are proposed? We believe that the impact of the scientific activities of domestic universities could be much higher if 38 proposals  developed by the Council of Vice-Rectors, that were submitted to the Ministry of Education and Science of Ukraine and the Verkhovna Rada Committee on Science and Education will be taking into account.

I will mention only some of them.

Firstly, in the real economic situation the state still is unable to provide a decent state budget financing of our science. Therefore, research institutions and higher education institutions should have the right to dispose of the funds they earn for the implementation of scientific and technological work in the form of contractual work or overseas contracts with accompanying financial documents directly through financial institutions (as it was before) and without limiting their distribution on the articles and not through State Treasury Service as it was introduced a few years ago. This procedure of using its own earned money has become the main obstacle to the development of off-budget science not only in universities, but also in the institutions of the National Academy of Sciences of Ukraine.

Secondly, the future of Ukrainian science depends on the extent of involvement of scientific and educational activities of talented youth and young scientists. Therefore, in Ukraine it is necessary to establish an effective mechanism for the social support of young scientists by providing them with housing (maybe official) and / or the provision of additional long-term soft loans for its construction.

Thirdly, it is necessary to address the issue of the basic funding of leading scientific schools and universities, in particular research universities, which activity  after the adoption of the new Law "On Higher Education" has the legislative framework. We support the position of Lilia Mikhailovna Hrynevych that it is time  to introduce in universities not only competitive, but also the basic funding. This base funding by analogy with the institutions of the state academies absolutely necessary for research involving full-time researchers of universities, as well as for the development of scientific and laboratory facilities and scientific infrastructure of universities, information support, encourage scientists to inventive activity and to support research scientists who have most cited scientific papers.

Fourth, for a decent future of our state, the  leadership must show political will and create real mechanisms to support the successful development  and demand for science and innovation in Ukraine. To do this, the new government should start with providing unconditional and strict implementation of the full adoption of laws on education, science and innovation sector of the state. Thank you for your attention.

Academician of NAS of Ukraine, Vice-Rector of NTUU"KPI" for Research, Chairman of the Council Vice-Rectors of universities and directors of research institutions MES of Ukraine