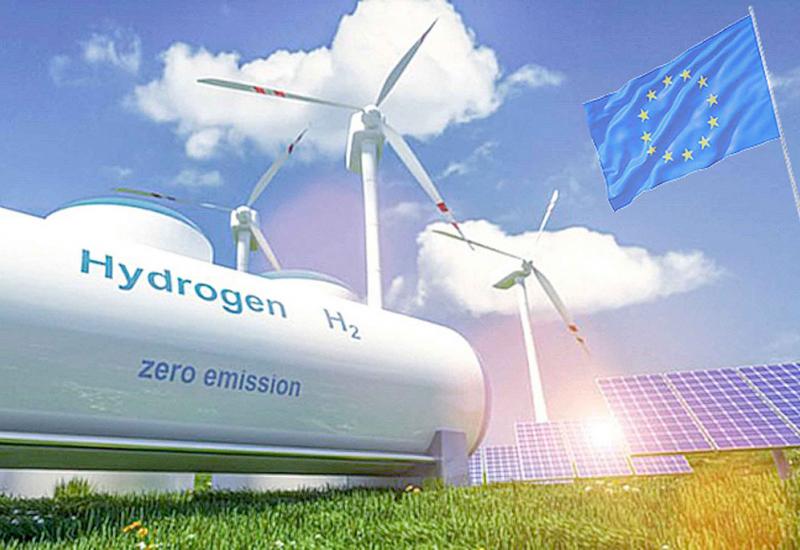 The participation of Ukrainian entrepreneurs, scientists and educators in implementing the European Hydrogen Strategy and, particularly, tasks that could be solved by our University staff were discussed on November 12. University administration headed by Rector of Igor Sikorsky Kyiv Polytechnic Institute Mykhailo Zgurovsky met with an initiative group of Ukrainan industrialists and its leader, founder and General Director of TMM Company, Mykola Tolmachev. There are a lot of tasks that could be solved with help of our University: hydrogen production in renewable energy technologies, long-distance hydrogen transportation, search for new materials to create hydrogen distribution infrastructure, and experts training for a new industry that will include dozens of plants. The topic of the meeting was not accidental: Ukraine's role in the the European Green Deal project is extremely relevant. The project initiated in the European Union concerns introduction of modern environmentally-friendly technologies and develop clean, renewable hydrogen, produced using mainly wind and solar energy. Igor Sikorsky Kyiv Polytechnic Institute can become one of the national and most powerful engines of training experts, as well as research and innovation in hydrogen industry.

However, first thing first. On December 11, 2019, the European Commission presented a new sustainable development strategy of the European Union - the European Green Deal. It promotes significant improving of resource efficiency through a shift towards a clean closed-loop circular economy, fighting global warming, reducing pollution, preserving biodiversity; the project covers all economy sectors - transport, energy, metallurgy, construction, agriculture and others. According to the Strategy, the aim is to transform Europe into the world's first climate-neutral continent by 2050. That is, Europe will become part of the world where economic activity does not cause greenhouse gas emissions, the main of which is carbon dioxide.

On July 8, 2020, two new documents specifying the European Green Deal were presented in Brussels. These are the European Strategy for Energy System Integration and the European Hydrogen Strategy. The European Strategy for Energy System Integration aims at improving the energy efficiency of the EU economy by planning and operation of the energy system across multiple energy carriers, infrastructures, and consumption sectors, for a more efficient, circular, and reliable energy system. It also identifies direct electrification and renewable heat as being among the most cost-effective and energy efficient decarbonisation options by extensive and efficient use of local energy sources, such as waste heat, industrial waste, biowaste energy, etc. as well as increase the deployment of heat pumps for space heating and cooling, and for low-temperature industrial processes etc.

The EU Hydrogen Strategy provides for widespread use of hydrogen as an energy source for those industries that cannot be electrified, and aims to reduce carbon emissions to zero by industrial facilities, transport, energy, construction and others. After all, hydrogen is a fuel that produces water during combustion, and its widespread use should become an important means of the cost-effective and energy efficient decarbonisation (abandonment of fossil hydrocarbons - coal, gas, oil, etc.) of the EU economy.
The priority for the EU is production of the so-called renewable hydrogen, i.e. that which is produced by electrolysis from renewable energy sources, mainly wind and solar energy. For its production the EU from 2020 to 2024 plans to install of at least 6GW of renewable hydrogen electrolysers, which should produce up to 1 million tonnes of renewable hydrogen per year. From 2025 to 2030, the integrated energy system in the EU will be increased to 40GW renewable hydrogen electrolysers, and annual the production of up to 10 million tonnes of renewable hydrogen. By 2050, hydrogen will be deployed at a large scale across all hard-to-decarbonise sectors. In particular, hydrogen will be used as a means of balancing the electricity system (daily and seasonal) based on renewable energy sources. By 2050, about 20% of renewable electricity can be used to produce renewable hydrogen.

The European Hydrogen Strategy estimates that total investment in renewable hydrogen in Europe could range from 180 to 470 billion Euros by 2050. Analysts estimate that by 2050, hydrogen could supply up to 24% of the world's energy needs, with annual sales of 630 billion Euros.

In order to implement the Hydrogen Strategy, the European Commission has established the European Clean Hydrogen Alliance, which includes businesses, NGOs, ministries and the European Investment Bank. The presentation of this alliance also took place on July 8, 2020.

Thus, a real energy revolution begins in the EU. And not only energy. These strategies provide for significant changes in all sectors of the economy, lifestyle and achieving a new quality of life.

International cooperation is an important part of the EU's Hydrogen Strategy. The EU intends to develop cooperation on renewable electricity and clean hydrogen with neighboring countries and regions to facilitate their transition to clean energy and sustainable development. Taking into account natural resources, interconnectedness of infrastructure and technological development, the EU's priority partners in this matter are the countries of the Eastern and Southern Partnerships, and Ukraine is named separately. The European Commission estimates that by 2030, the Eastern and Southern Partnership countries will potentially be able to install electrolyzers for hydrogen production with a total capacity of 40 GW. It is important that this hydrogen is produced from renewable energy sources.

The EU's hydrogen strategy provides for cooperation with partnership countries in joint hydrogen energy research and development programs with the EU. Separately, it is said that the participation of the Western Balkans and Ukraine in the European Alliance on Pure Hydrogen will be encouraged. The Ministry of Energy of Ukraine has already started developing a roadmap for the implementation of hydrogen energy. Ukrainian business also praised the prospects for Ukraine. And immediately began to do lane
Igor Sikorsky Kyiv Polytechnic Institute is obviously interested in the Strategy implementing. During the meeting on November 12 and the meting a week later, Igor Sikorsky Kyiv Polytechnic Institute was made a proposal to join the European Clean Hydrogen Alliance. Some working issues of the university's participation in the Alliance work were also considered during the meeting. The International Collaboration Department is currently preparing the documents required for admission. As a member of the alliance, Igor Sikorsky Kyiv Polytechnic Institute can carry out fundamental, applied, engineering and industrial projects corresponding to numerous activities of the alliance; establish an interdisciplinary educational program “Green Economy”, expand large-scale activities of the Horizon 2020 National Contact Point (NCP), “Climate and resource efficiency, including raw materials” within the “Green Deel” framework to involve 52 member universities of the Association of Higher Technical Institutions of Ukraine, headed by Igor Sikorsky Kyiv Polytechnic Institute. Science Park “Kyivska Polytechnika”, Sikorsky Challenge Innovation Holding, and Business Incubator will contribute to achieve the aims of the Alliance in the development of innovation sector. The annual All-Ukrainian festival of start-up projects “Sikorsky Challenge” - a competition of startup projects on the subject “Clean Hydrogen” - is also going to be held in January 2021.