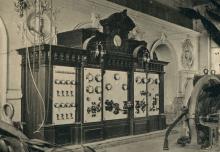 In June 1898 it was announced the first enrollment to the Institute. In accordance with the Charter, the admission examinations were open to all who have gymnasium diploma, secondary school or other secondary schools, equated to the gymnasium. The applicants, who have completed the study in other universities, were enlisted without contest. 1100 applications were received for 330 places. Significantly more applicants than expected student places, successfully withstood the competitive examinations in mathematics, physics and Russian language. At the request Institute Counsil the Ministry of Finance allowed  to take in excess of 30 people. So, in the first set, there were 360 ​​people, including mechanical department - 109 engineering - 101, agronomic - 87, chemical - 63 [25, p. 2].

Despite the fact that the institute was designed for 1,200 students, their numbers grew rapidly. Already in 1902 there were enrolled  1255,  in 1909 – 2396 students. It should be noted that about the same number of students remained until the First World War. However, due to the mobilization of undergraduate students in the army and the involvement of undergraduates to work in military enterprises the total number of students of the institute in 1916 dropped to 1137 [26, p. 56].

The term of study at the institute was four years (eight semesters). There was course system of training. It is known that all technical colleges had a five-year period of study. It was assumed that the reduction in training time for one year will not hurt the quality of the course and achieved by increasing the intensity of teaching, reducing holidays and exam periods. In this case, industry will get the experts faster, and the young people a year earlier enter into adult life [2, p. 409].

According to the curriculum the academic subjects were distributed during the training so that the fundamental sciences necessary for the proper assimilation of special ones, were studied in the beginning. The total number of theoretical lectures did not exceed 16 hours per week, and lectures and practical classes - 6-7 hours a day. It was taking into account that students used daily 3-4 hours for independent work (based on the maximum rate of 10 work hours per day).

For the fourth year it was necessary to listen a special course and pass exams. There were mandatory the industrial practice and preparation of the report, a special project of the plant, the project of a steam boiler, the protection of this project.

Some lectures were listened  at the same time by students of two or more departments. For example, the students of all four departments listened together theology, physics, general chemistry, political economy. Students of mechanical, and chemical engineering departments together listened to lectures on theoretical mechanics, building art, applied mechanics, thermodynamics and heat engines, hydraulics and hydraulic motors, heating and ventilation, drainage, structural mechanics and the like.

As you can see, the curriculum of the Institute, in addition to special disciplines, included a significant number of hours for general engineering subjects - mathematics, physics, chemistry, mechanics and the like. In all disciplines, along with the lecture a lot of time was given to practical training. So students received not only sufficient theoretical knowledge, but also solid and deep practical knowledge and skills to apply them in the workplace.

At the chemical department, for example, workshops took 57.5% of the total training time, while in the St. Petersburg Institute of Technology, only 39, 4%. At the same time a number of hours was lower than in Western European polytechnics, particularly in the famous Zurich Polytechnic, where practical training was given to 67.3% of all training hours [2, p. 69]. Such a ratio of lectures and practical training provided the preparation of the specialists for the industry.

Teaching special subjects was accompanied by exercises, drafting and practical training in teaching and supporting laboratories and workshops. In addition, in the summer for students of all branches there were introduced practical exercises with photographing, leveling the terrain. Practice was held at factories, construction sites, railways. Students of Agronomy Branch worked in the experimental field, experimental agro station, in agronomic laboratory.

At the end of each semester the exams were conducted. Students who have successfully passed the exams, were admitted to training in the next semester. But for various reasons Institute during the first six years actually went to subject training system, under which a student was listening to a particular course, taking exams, without waiting for the general examinations.

To the destruction of the course system, firstly, there were led the massive student unrest, strikes of students and as a result, the temporary closure of the government institution that has reduced a certain amount of training time, extended the deadline for passage of lectures and practical exercises, and secondly, the material failure of students, prompting them to spend much of their time to work. Under these conditions, the course system was too heavy for the students.

The Charter Institute provided significant rights to students who were transferred to the senior course. They could define the order of exams and their time. The professors had the right to take examinations immediately after the reading of the course, as well as to exempt students from the results of examinations and practical workshops occupation. Sometimes it happened that the students were transferred to the senior course, even among the school year.

Later, several attempts to return to the course system to streamline the training time. Thus, in 1911 The Engineering department has created a special commission for the preparation of the new rules, but its work was useless.

History of the university
Нарис історії