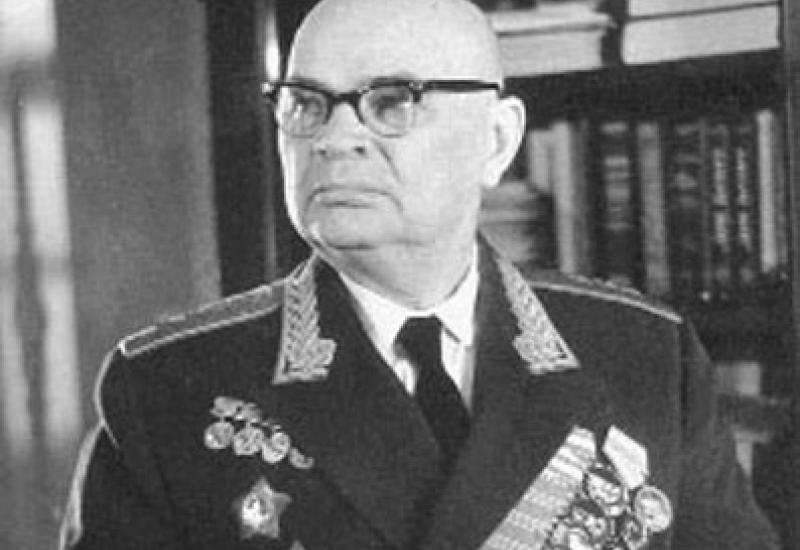 Name an outstanding designer of artillery weapons mid-twentieth century, Colonel-General of Technical Troops, Hero of Socialist Labor (1940), winner of four Stalin Prizes of first degree (1941, 1943, 1946, 1950), Doctor of Technical Sciences, Professor Vasil Gavrilovich Grabin (1899 / 1900-1980) is inextricably linked to the development of numerous artillery pieces, each of which played a significant role in the cause of peace defence in the world. These are tank guns (76 mm Ф-34 and the 85 mm ЗІС-З-53 for the best medium tank of World War II T-34 and Ф-32 and ЗІС-5 for the heavy tank КВ-1); 57-mm anti-tank gun ЗІС-2; 100-mm field gun БС-3, for its ability to effectively destroy the German "Tiger" and "Panther" nicknamed by front-line soldiers "hunter" and others. Most prominent of his creation is the most famous gun of World War II - 76-mm divisional gun model 1942 (ЗІС-3). I.V. Stalin, seeing it the first time in January 1942, said: "This gun - a masterpiece in design artillery systems." ...

The first prototype of the ЗІС-3 was made June 22, 1941, and later, after a month of the factory test, was demonstrated in Moscow to representatives of the customer - the General Artillery Directorate (GAD).

At this time the Red Army used another, also designed by Grabin 76-mm divisional gun model 1939 Ф-22 УСВ. After the new gun show, Deputy People's Commissar of Defense and Chief of GAD Marshal Kulik made a surprising verdict: "Your guns are not needed."

The stunned designer was able to say only one word: "How?"

"And just like that, not needed, - said Marshal. - Go to the plant and make more of those guns that are in production."

Despite the obvious advantages of the new guns, representatives of the commission were not able to appreciate the huge potential inherent in its design. ЗІС-3 represented a gun barrel Ф-22 УСВ, which was superimposed on the light and durable carriage mastered in the production of gun ЗІС-2.

It would seem that the new gun with excellent performance was given up. But Grabin was characterized by extreme and unwavering perseverance in defending his views when it comes to buisness. And he went on an extremely risky move - on its own initiative launched serial production of unrecognized gun at the factory number 92 in the city of Gorky (now Samara, in his memoirs, V. Grabin called this artillery factory by the name Privoljskiiy).

Later, in his memoirs Vasily Gavrilovic recalled: "No one, except for a narrow circle of initiates, had any idea that there was a new gun. Single piece that could cause suspicion - muzzle brake -was decided to produce in a experimental workshop. They could do whatever they want without fear of publicity ... There were in the workshop anti-tank guns ЗІС-2, but without the gun barrel. When it came to the general assembly, the barrels and the brakes for ЗІС-3 were ready. During the night several ЗІС-3 were assembled and checked carefully, and in the morning were represented to the military acceptance. "

As expected, the representatives of the military office refused to accept the "illegal" guns without the GAD permission. They sent the corresponding request, but the GAD was in no hurry to answer. A ready-made guns continuously accumulated in the plant shops. Knowing the great need of the front in the guns, the military acceptance chief I.F.Teleshov gave the command to take the ЗІС-3. Thus, even before the official adoption of the new guns, they began to come to the front and fully proved all their advantages. ..

In the evening, August 10, 1941 Grabin was urgently summoned to the plant management. Here's how he describes the events.

"Elyan (A.S. Yelyan - director of the plant manager - I.M.) was in his office. Said shortly: - Please call Poskrebyshev (O.N. Poskrebyshev - Head of a special sector of the Central Committee of the CPSU (b) - the secretariat of I.V.. Stalin - I.M.).

What task I will get, I did not know. But I had no time for guess. Picked up the phone. Dialed.

And then I heard the Stalin calm voice:

- You are well aware that the situation at the front is very difficult. Fascists are striving for Moscow. Nazi Germany has a significant quantitative advantage in weaponry. Regardless of this we will win. I beg you, do everything you need and give rather more guns. If it needs to go on the decline in the quality, then go for it.

What I heard stunned me, I didn't answer immediately.

- Comrade Stalin, your request, your task, I will pass it to the plant collective. You can firmly assure that the plant in the near future certainly will sharply increase production of guns.

- When you go to a larger program, organize your work to ensure that guns output will be increased continuously. Keep in mind that for us each gun is valuable. "

And Grabin kept his word. In his memoirs, he wrote: "For three and a half months we finished all the work ... and tested prototypes. As a result of structural and technological modernization about 70% of all the details were re-designed. Indeed, it was rather the creation of new guns. Their technology was much higher and the details number was much diminished. For example, ЗІС-3 and ЗІС-2 before the modernization had to 2080 parts, and after modernization - 1306 tank guns - respectively 861 and 614 parts. "

ЗІС-3 improving did not stop throughout the Great Patriotic War. As a result, the production capacity of the ЗІС-3 on the Volga plant were increased by 18 times. ЗІС-3 has become the world's first artillery gun set at the mass production and conveyor assembly. During the war, the Red Army has got more than 100 thousand guns ЗІС-3 of three varieties, which had certain differences.

Initiatively created ЗІС-3was officially adopted on 12 February 1942. By the time the front has successfully fought at least a thousand ЗІС-3 made at own risk by Volga plant under the personal supervision of V.G. Grabin, who always looked a few steps forward and subtly felt the course of technological development, including the trend of continuous competition between armor and projectile.

About the combat capabilities and simplicity ЗІС-3 one can talk endlessly. Let's consider only two guns that are in Artillery Museum in St. Petersburg.

Our enemies - Nazi Germany - also have had effective guns in the class size (75-77 mm), but nothing similar any "Kroup" or "Rheinmetall" were not able to create. Indicative evaluation given by the head of department of artillery cannon research firm "Kroup" Professor W. Wolf: "... ЗІС-3 is the best 76-mm gun of World War II. ... This is one of the most brilliant designs in the history of conventional artillery."

In many localities there are, as a tribute to the winners, on the pedestal different types of weapons, and above all - guns and tanks. These developments are dominated by symbols of the Great Victory: ЗІС-3 designs V.G, Grabin and T-34 tank with the gun Ф-34 of the same designer, and also the tank T-34-85 with the gun ЗІС-З-53 (designer Grabin). But the famous "divizionka" did not become a part of history and even after 70 years since the creation ЗІС-3 is used as Salyut gun, as well as the buttle weapon in the armies of a dozen countries around the world!

Unusual monument to creative genius of outstanding designer was mounted at his grave at Novodevichy Cemetery in Moscow, this is broken in several places by artillery shells armor plate, symbolizing the irrepressible energy V.G. Grabin, his commitment and ability to reach the goal, even at first glance, insurmountable.