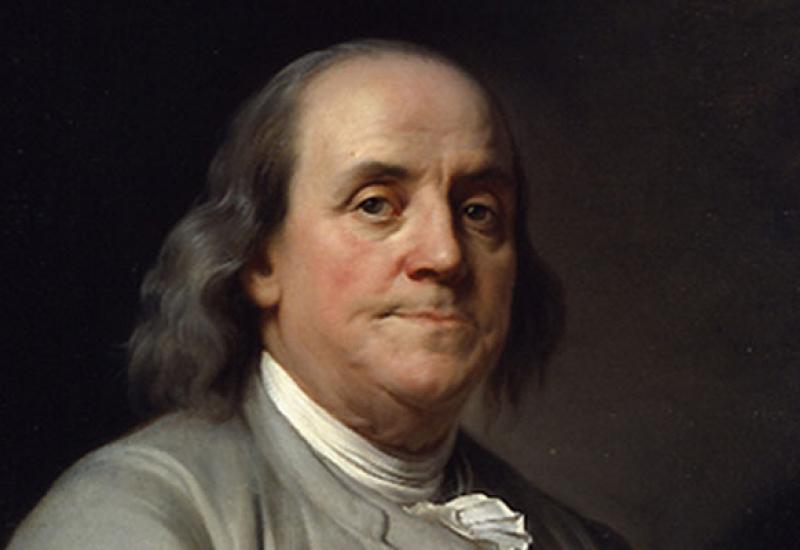 Ask almost anybody today - who is depicted on the banknotes of the United States, certainly you will hear - US presidents. And if that someone will not remember all the names, then at least two names he would call - George Washington and Benjamin Franklin, who immortalized on one and hundred-dollar bills. Most even without hesitation also say that Washington was the Chief of the colonists in the Revolutionary War in North America and the first president of a great power, but about Franklin will not add anything. So who is he, Benjamin Franklin?

First of all, it must be said at once that Benjamin Franklin (January 17, 1706 - April 17, 1790) never was the US president.
But he made a lot during his life. He was an educator, scholar, statesman, leader of the revolutionary movement in America, one of the authors of the Declaration of Independence and the Constitution of 1787, the founder of the first in North America, the public library, the American Philosophical Society, University of Pennsylvania. His name is associated with the formation and development of American journalism.

It was him who said the famous phrases like: "Time is money -" "Do not put off till tomorrow what you can do today", "One move is equal three fires."

All in what Franklin was engaged, he did diligently and in good faith. But the main work he really performed with enjoy and for which he almost had no time were the theoretical research and scientific experiments. More or less regularly his scientific activity did not last long - only five or six years, and the more worthy of wonder those extraordinary results that he achieved in this short period in different branches of science. Franklin studied in detail the electricity, thermal conductivity of metals, the propagation of sound in water. He was interested in shipbuilding, geology, botany, history, economy, invented the lightning rod (which is usually incorrectly called a thunder rod). He did a very convenient and efficient fireplace, which is now used throughout the world, as well as indispensable attribute of the fireplace - a rocking chair.

Already as a child he showed a tendency to invent. So, one day Ben went to the beach with a few planks, the size of hands and feet. Wearing these improvised flippers, he swam so fast that his friends were shocked. Another time, a guy came to the sea with a huge kite. Waiting for a fair wind, he launched a snake into the water, rolled onto his back and holding hands on a rope, swam to sail, causing envy among peers.

In 1753, Franklin first began exploring the atmospheric electricity and proving the electrical nature of lightning, substantiated the idea of creating a lightning rod. To evaluate the real feat of the scientist, you have to remember a time when he put his experiments: for centuries it was considered the sanctity of the sky, and ordinary mortal here is experimenting with "heavenly fire." The great philosopher Immanuel Kant declared that Franklin - new Prometheus, who got people down fire from heaven. But the scientist is not only received, but also tamed the heavenly fire, which resulted in an annual loss of life and terrible fire, which burned during the whole of the city. Finally, Franklin discovered the positive and negative poles in electricity and proposed to introduce in this area familiar to us thing as a "plus" and "minus", invented a parallel-plate capacitor and formulated the law of conservation of electric charge. Many years later the unit quantity of electricity and electrical charge in CGS was named after him - Franklin.

Students and employees of the University are able to see Franklin not only from time to time on American banknotes, but everyday: one has only to go in the energy wing of first building – there is his figure in the gallery of eminent scientists electricians.

... Coming from the people, the fifteenth child, Benjamin Franklin really enjoyed popular love. No one in the country's history was buried with honor such as Franklin: twenty thousand people attended his funeral, and the US Congress announced a two-month mourning throughout the country. And how can you not respect a man who always lived on the principle formulated by him: "The most wanted by God - the good deeds for the sake of the people"!

• A person does not live in what he eats, but what digests. This is true for the body and mind.
• If the time is the most expensive thing, a waste of time is the most wasteful.
• If you do not want to be forgotten as soon as you die, write a decent book or doing deeds worthy to write about them in books.
• When I serve others, I believe that I pay debts and do not earn a reward.
• In rivers and bad government floats at the top easier.
• Who buys too much, eventually sell necessary.
• Be careful with small expenses: the most leak can sink the largest ship.
• If you want to know the disadvantages of the women, praise her to her friends.
• If you want to get rid of the guest, who bores you with his visits, give him a loan.
• Choose a friend slowly, still be less in a hurry to exchange him.
• You can not help someone who does not want to listen to advice.
• If you want to prolong your life, shorten your meal.
• Who says that money can do everything that one possibly can do anything for money.
• Master of excuses is seldom a master at anything else.
• Laziness makes every work difficult.
• Absent is always to blame.
• To see is easy it is difficult to foresee.
• One today is worth two tomorrow.
• What starts anger ends in shame.
• Great people usually lose themselves.