Faculty of aviation and space systems - 20! 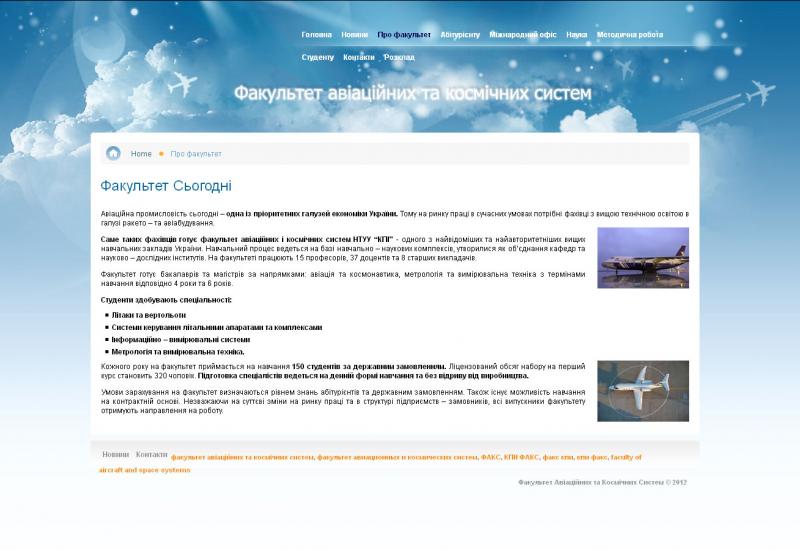 Faculty of aviation and space systems - one of the youngest faculties of NTUU "KPI" created for the solution of needs of Ukraine as sovereign the aviation and space power country according to the decision of Council of university in May, 1993.

As initiators and founders of faculty performed the National Space Agency of Ukraine in the face  of his CEO academician V.P. Gorbulin the rector of university academician M.Z.Zgurovsky and the manager acted. department of theoretical mechanics and MNDIPM "Rhythm", people's Deputy of Ukraine M. A. Pavlovsky. Thus, by the century of NTUU "KPI" revived at the new level of tradition of development of aircraft and astronautics which were begun at the beginning of the XX century with works of professor M. B. Delon on department  of theoretical mechanics of KPI, development of the aircraft designer I. I. Sikorsky and designer  of spaceships S. P. Koroleva - students of mechanical faculty of KPI.

The faculty consists of 4 departments, each of them has the own  history:

Staffs of departments of faculty created a basis of scientific-researching institutes and centers:

The faculty celebrates the 20th anniversary considerable achievements in educational-methodic and educational-organizational work , first of all, thanking to group of scientific and pedagogical workers.

Today at the faculty work 10 professors, 38 docents and 11 senior lecturers.

Honorable doctor of the faculty of aviation and space systems is the first astronaut of independent Ukraine, the hero of Ukraine the major general Leonid Konstantinovich Kadenyuk and the first astronaut of the Federative Republic of Germany Ulrich Walther, who is professor of  Technical university of Munich.

The faculty prepares bachelors, experts and masters with training terms respectively 4 years; 1,5 and 2 years in 3 directions:

For high-quality preparation of specialists of all educational and qualification levels by group of lecturers is carried out a lot of work on ensuring educational process with all necessary methodical  providing. During the existence of the faculty 20 textbooks with a signature stamp of the Ministry of Education and Science of Ukraine and a large number of methodical instructions to performance of laboratory works, a practical training, academic year projects and works are published.

On departments of the faculty are created  22 specialized laboratories in which students gain practical experience on the chosen specialty. For educational process the bench hall is involved in which industrial samples of the aircraft equipment, including planes MiG-23, Yak-40 and An-26, the Mi-2 helicopter are uses. Laboratories of " Motorola Foundation" corporation, geo information technologies of the company Dzhepssen of the corporation the Boeing are open , a computer class with program license providing for 3-D modeling (design CAD/CAM / SAE) according to the program Tempus. Participation of students and lecturers in the program of creation of microsatellites is provided by means of the created on department  devices and control systems of aircraft, of the laboratory of satellite construction and earth control station, where circuit technical solutions of control systems and collection of information from microsatellites are fulfilled.

For mastering of modern technologies specialized laboratories use the equipment and the software provided by the leading world corporations, among which there are: Motorola, Analog Devices, Texas Instruments, Infopulse, National Instruments, Melexis, Jeppesen etc. The department of automation of experimental researches became the certified representative of National Instruments firm in Ukraine.

At the faculty actively develop new technologies of training, in particular the remote. On the department of information and measuring equipment the pilot project on introduction of distance studying in "Metrology and measuring equipment" is realized. 8 faculties and 12 departments of NTUU "KPI" became participants of implementation of the pilot project of training of bachelors in the "Metrology and Information and Measuring Technologies" direction. On the server of the Ukrainian institute of information technologies in formation of NTUU "KPI" are placed more than 50 sites of remote courses which passed test operation, 31 from them received a signature stamp of NTUU "KPI" and certificates of UIITO. Technologies of remote access are developed, including with the help of mobile communication, to laboratory equipment that considerably expands possibilities of remote technologies in studying.

For years of the existence the faculty trained 2120 experts, from them 540 masters.

In 2006 it is entered the credit and modular rating system of training allows to estimate more objectively knowledge of students and stimulates them to systematic studying during a semester. From the total amount of students 7% study only perfectly  and another 33% perfectly well and well.

The KVN faculty team won first place in league of KVN of NTUU "KPI". The national teams of faculty won soccer competitions, to an arm wrestling, university relays of health and "Stock anti-AIDS".

Lecturers and students of faculty of aviation and space systems cooperate with many schools of Kiev and Ukraine: during 2012 information support was carried out at 130 schools.

Lecturers of faculty are a part of jury of competition which carries out the National center of space formation of youth of Ukraine of Makarov - "Peace space", of engineering competitions among school students, which carry out the student's organization BEST-KIEV.

The faculty has the common projects of the academic mobility and scientific-technical projects with fifteen higher education institutions partners from countries from Europe and Asia. Among them:

On educational projects and projects of the academic mobility which are carried out at faculty (the CRIST draft of the TEMPUS program, the EWENT draft of the ERASMUS MUNDUS program), more than 70 students and lecturers of faculty passed training in higher education institutions of Europe. The representation of the international organization of the academic exchanges of IEASTE (The International Association for the Ex of Students for Technical Experience - Germany) and local group of the international student's organization BEST-KYIV works at faculty (Board of European Students of Technology - Council of students of technical universities of Europe).

Since 2005 at faculty annually internships specialists of aerospace branch of the People's Republic of China.

By contracts with foreign partners at faculty internship more than 140 experts from China, and also Germany and Russia.

Six years in a row at faculty conducted the International student's conference "Intelligence, Integration, Reliability" in which take part students of Poland, Koreas, Slovenia, the Czech Republic, and our students - in conferences of partner universities.

Through postgraduate study and doctoral studies 130 graduates are prepared, 22 candidate and 2 doctoral dissertations are protected by the staff of faculty, and also 12 candidates and 8 doctors of science for other establishments are prepared.

Lecturers and scientific faculty prepared and published 44 monographs, 3 State standards of Ukraine (DSTU 2681-94, DSTU 354-97, DK-011-96) and 3 techniques of State standard of Ukraine (MI-081/29,16-98 are developed; MI-081/29,16-02; MI-081/29,16-01 which are introduced in production in JSC Rostock). Employees of faculty actively participate in holding of conferences and seminars. The average number of publications grows (articles and theses of conferences) in a year on one student and on one lecturer : so, in the first years of establishment of faculty it was respectively 1,3 and 3,7, and in the current year - 1,6 and 4,5. In 20 years scientific and pedagogical workers and students took out 69 patents for the invention.

In this period was made scientific research for the sum of 24500000 UAH and 450 thousand dollars. By results of the executed NIR in the industry of Ukraine was introduced a large number of devices and devices. Among them:

The faculty on a constant basis will organize and hold the International scientific and technical conference "Girotehnology, navigation, traffic control and designing of aerospace equipment".

Graduates of faculty successfully work in institutions, the organizations, at the enterprises of the city of Kiev and Ukraine, in particular at GP "Antonov", at Institute of cybernetics of Glushkov, at the State enterprise of special instrument making "Arsenal", GP "Ukrmetrteststandart", Ukrkosmos, in NTUU "KPI", banking institutions and establishments on IT technologies, at plant of Artem, in KKB "Beam", etc.

The faculty approached the 20 anniversary with considerable achievements which are the next step in formation of modern scientific training center of training of specialists for aerospace branch.

Y.V. Bobkov, the deputy dean of the FAX on educational and methodical work, cand.tech.sci., docent.