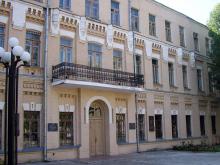 State Polytechnic Museum has the status of an independent structural unit of scientific research department of NTUU "KPI" under the decree of the Ministry of Education of Ukraine № 191 of 29.06.1995 in accordance with the Cabinet of Ministers of Ukraine № 360 from 29.05.1995 “ About creation of State Polytechnic Museum in Kyiv ". The museum was opened on 11th September, 1998 during the celebration of the 100th anniversary of the KPI.

The museum is situated in the educational building №6 (former workshops of Kyiv Polytechnic Institute).

The adjacent to the museum area is nicely arranged with exhibits. On the building of the museum are established memorial boards in honor of Sikorsky I.I. and Lyulka A.M., monuments to prominent scientists Paton E.O., Lebedev S.O., Kravchuk M.P., Korolev S.P. .

Review lectures and excursions are held in the museum.

On the initiative of the President of NAS of Ukraine Paton B.E. and rector of NTUU "KPI" Zgurovsky M.Z. at the State Polytechnic Museum on October 25, 2001 began a series of scientific readings " Prominent designers of Ukraine ". Holding scientific readings is enforced with the joint order № 256/1-108 on July 12, 2001 in NAS and NTUU "KPI". These are the scientific meetings of scientists, students, creative technical intellectuals from Kiev and Ukraine. Their main task is to preserve historical memory about important national achievements in science, technology and engineering design, creating a complete picture of the historical development of science and technology in Ukraine, public review of prominent national creators, pioneers in various fields of technology, education of students at examples of high achievements of previous generations of engineers and scientists. 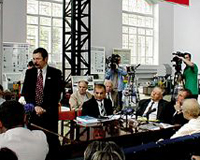 Readings, which are held regularly once in a quarter on the territory of NTUU "KPI" within one or two days, include: reports and its discussions, familiarization of readings participants with Kyiv, NTUU "KPI" and expositions of museum and demonstration of theme photos, films and videos. During the readings on a regular basis the competition named "Researcher" for the best research paper is held among the members of the Small Academy of Sciences.

There is also a publication of the book series " Famous names of Kyiv Polytechnic Institute ".