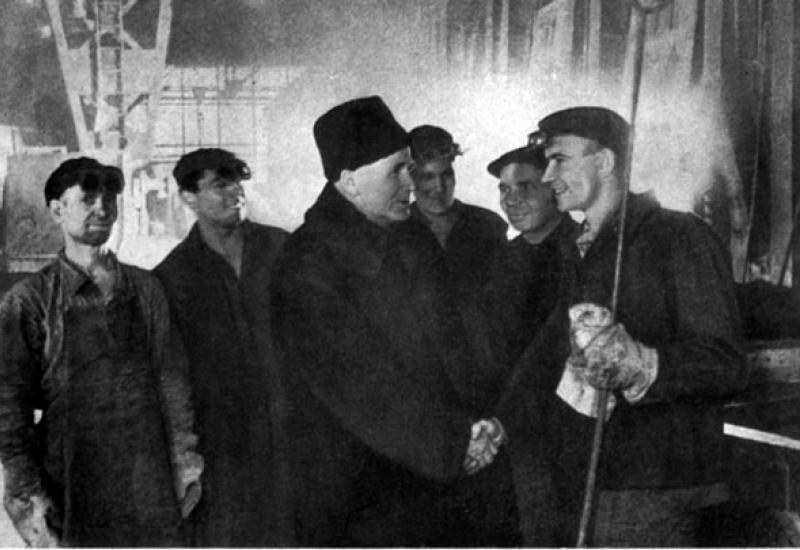 Ivan Pavlovich Bardin (1883-1960) - academician and vice president of the Academy of Sciences of the USSR, Hero of Socialist Labor, holder of seven Orders of Lenin, twice winner of the State Prize, the Lenin Prize, a man who has spearheaded the design of powerful metallurgical enterprises, as well as the development and implementation of in the USSR continuous casting of steel and BOF process.

A graduate of the Chemistry Department of the Kiev Polytechnic Institute, being only 27 years old he for the first time saw a metallurgical plant, and after eight years, became chief engineer Enakievo Steel plant and Mines, and after four years - their director. After that he was the chief engineer of Makeyevka Metallurgical Plant, Dnipropetrovsk Metallurgical Plant, Kuznetsk and Kuznetsk Metallurgical Combine, organizer and director of the Central Research Institute of Ferrous Metallurgy (famous and respected throughout the world the Central Scientific and Research Institute of Ferrous Metallurgy-CSRIFM) ... And this is not a complete list of posts of I.P.Bardin - a real engineer, an outstanding practitioner and theorist of the steel industry world-class.

"Engineer is a person who is conscious of its technical activities contributes to the production of something new.

Engineer is different from a practical who works in a factory, first of all by the fact that he has the scientific training, theoretical knowledge of the laws of the processes occurring in the various production units. This knowledge opened him a path to creativity. The ideal engineer can serve as Leonardo da Vinci, he combined in his person the scientist, the practice of the artist. Although in the modern development of technical sciences on can difficult to combine these three different profiles, nevertheless one should strive for. Any well-made technical case should be performed at the same time beautifully and in full compliance with the provisions of the research. "

"The conditions under which it is conducted training of young professionals have to develop in him a love for their chosen profession, but not a lesser role is played by the early years of his work at the factory. Engineers from high school benches - a raw, primary material, which must be turned into people who are not afraid of the elements of a "metallurgical sea." To educate people their leaders at the plant must: 1) have an excellent knowledge of their specialty, 2) does not become conceited and does not make the secrets for their assistants and employees 3) to organize the work so that the subordinates feel their involvement in the case, not only learned bitterness of defeat, but the joy of victory.

The task of the university professors - to teach students not only know but also to understand certain phenomena of nature, to understand them on their own and some well-known criteria to define new unknown facts. You must strive to achieve from the students firstly the understanding of the subject.

The difference between knowledge and understanding is essential. Knowledge is achieved by the memory, understanding – by the mind. Some prominent scientists (eg, Faraday) did not have an exceptional memory, but made great discoveries based on a deep understanding of the studied patterns.

Following this, you need to develop observation. Observation of those or other phenomena occurring around us, analysis and explanation of their reasons help firmly grasp the essence of the processes under study.

Finally, another great job of professor - to teach students, future engineers - never to deviate from the chosen specialty. Life is rich for opportunities, there are the easy ways, seducing by their capabilities, but you must choose one path, no matter how hard it may be, that has life goals, and firmly stick with it.

Best of all, when it will be a new, unknown way. On such roads it is difficult to go, but you can

Proper education of engineers at the beginning of his activities is no less important than education in higher technical educational institutions. Engineer, graduated from the institute, should get "heat treatment" at the factory ...

At the moment, the mechanization freed an engineer from hard work, that has no engineering nature - from the management of manual work at the stoves, freed up the time in order to apply their knowledge in the theory of processes. The principles underlying the reduction of iron from ore, remain unchanged. Laws reduction, oxidation are understood as well as in the past. The engineer should provide maximum speeds of these processes, increase productivity ...

Over a hundred years the ferocious metallurgy increased its production a hundred times, the number of production units, smelt metal, declined by more than a hundred times, and labor productivity has increased tenfold. Such a striking progress in the first half of the last century, we have been obliged to physical chemistry of metallurgical processes, starting with the same second half of XIX century - the Application of Mechanics and Electrical Engineering in the production of metal.

In recent years, advances in metallurgy again were encouraged by the physical chemistry of metallurgical processes. Therefore, young students should be very familiar with chemistry. It is also important the knowledge of solid state physics - metal, the laws of its crystallization and transformations, the effect of alloying elements and various impurities. The study of patterns of these properties relates to the field of physics of metals. The study of crystals of various substances reveals the secret of their atomic structure. The emergence of new, more advanced methods of research contributes to the development of works Theoretical and Experimental Physics in the structure of matter. About these new features, I remember in order to once again emphasize how it is needed now the knowledge of physical chemistry and physics as the foundation of the metallurgy.

Students and professors devoted themselves to research, as well as young engineers working in the plant must maintain constant communication with each other. Without such a connection, without constant communication theoretical scientists with scientists practitioners can not be progress in the production of metal, because the theory without practice, and practice without theory become empty.

However, the establishment of correct mutual relations between science and industry is far from simple and easy task. One must necessarily be met certain sequence on the way from the laboratory to the factory: theoretical analysis and testing it for laboratory testing, laboratory work and testing them for testing semi-works and, finally, work at the plant. "