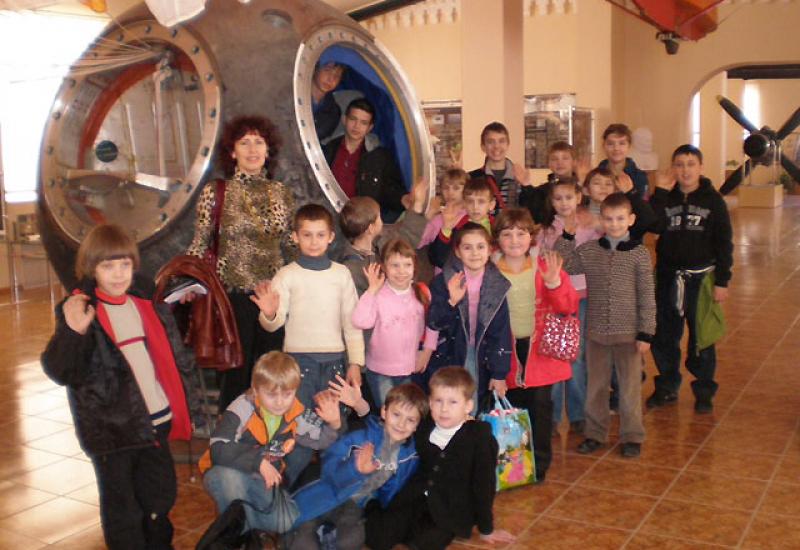 Of all the pieces exhibited in the Department of Aviation and Astronautics State Polytechnic Museum, the viewers’ attention is attracted by the lander of spacecraft "Voskhod", which had been in space.

October 4, 1957 the humanity has witnessed space launch of the world's first artificial satellite, created in the Soviet Union under the leadership of Sergei Korolev. A year later, the Soviet leadership had decided to develop a manned satellite. The initiator of this decision was also Sergei Korolev.

The first spacecraft was made of aluminum alloys and consisted of two compartments: lander with the astronaut's cabin and instrument compartment. A weight of lander was 2.5 m, a diameter - 2.3m. Externally the whole body was covered with a heat shield, which was applied a layer of insulation. The cabin included astronaut chair, devices to control the ship, life support systems and thermal control. Although the ship was fully automated, astronaut at any moment could take over the control of it.

Spacecraft designer, cosmonaut K.P.Feoktistov in his memoirs wrote how at the start of developing a spaceship designers decided to return to the ground not the entire spacecraft, but only that part of it which is necessary to ensure the return to earth of the pilot, and divided spaceship on the lander and instrument-making equipment compartment. Then various forms of lander were considered: cone with different angles, inverted cone, rounded cylinders. It was required to secure sufficient space, good resistance on the way down, to decrease the weight of the thermal protection, to consider the aerodynamics at hypersonic, supersonic and subsonic speeds. When they began to analyze the hemisphere, it was appeared an idea to make the lander spherical. For a given volume the sphere gives the minimum surface and accordingly requires the least mass of heat protection. Because its aerodynamic properties have been well studied before, the task of calculating the trajectory of the vehicle’s descent was simplified and that gave a time advantage. A stabilization of the lander in the atmosphere was provided by the displacement of its center of gravity at the geometric center.

But in future it was planned to use the spaceships with several astronauts. Creation of such vehicles would give the opportunity to send into the space experts engineers, doctors, biologists, who could conduct various studies in flight. In February 1964 Korolev set designers task to develop a multi-seat vehicle. The task was very difficult. The rocket had to carry a group of people who were supposed to fly into space without spacesuits and had to return to earth in the lander. So it was necessary to create a system of "soft landing", and much more should have been done the first time. To inspire designers, Korolev promised that an engineer will be included in the crew of 2-3 people. The work in DB started.

Besides the crew (without space suits) the lander of spacecraft "Vostok" housed equipment of life support systems, food and water, means of control and management of the systems on board the ship, television cameras, means DF on the descent and landing. To maintain the basic parameters of microclimate in the cabin it was used the air conditioning system to ensure absorption of carbon dioxide and moisture, and a necessary amount of oxygen for respiration crew. The amount of oxygen was adjusted automatically. In the instrument compartment, there were housed radio equipment, brake fluid rocket engines, thermal control system, power sources.There were externally fastened cylinders of compressed gas engines and orientation system of the ship, cylinders of compressed oxygen and air for ventilation of space suits for the crew in an emergency oxygen cabin in case of depressurization.

Three seats with individual cradles were installed in the lander. They were equipped with additional shock absorbers. To ensure a soft landing solid brake engines were used. They started to work when a one and half meter pin touched the surface (it unrolls before landing as spring Roulette) and touchdown speed was reduced to 2.4 m / s. The parachute system was improved significantly. In order to reduce the impact on the earth's surface, parachuting descent on the site was carried out on two parachutes that were attached not directly to the lander, but to the motor of soft landing with a help of pyrotechnic lock. After landing, the locks were triggered and parachutes’ strands were rejected, thus the lander would not be pooled in conditions of strong wind. Advanced equipment of manual flight control and descent allows the crew to orient the ship in space and landing in the selected area, using each of the available brake motors - basic (liquid) or backup (solid fuel). The first spaceship “Vostok” had three hatches, through each of which the crew could get out after landing. The ship had three portholes through which the crew could conduct visual observation and make a video recording.

On this new multi-seat space ship "Voskhod" October 12, 1964 it has launched the 1st space crew consisting of three persons: the commander V. Komarov, the researcher K.Feoktistov, the doctor B.Egorov.

The tasks for the crew were as follows: to experience a new multi-seat spaceship, to explore the performance of each crew member, to perform biomedical, physical, technical and psychological research, to study the effect of flight factors on the human body, to hold video recordings of the earth's surface, and others.

Making a daily flight and successfully executed the entire scheduled program, the crew safely and softly landed in a given area. After 5 months, 18 March 1965, it was launched into space the spaceship "Voskhod-2" with two cosmonauts - P.Belyaev and O.Leonov.

On this ship, it was additionally installed airlock for exit astronaut into space and return to the ship. The cosmonaut O.Leonov was staying 12 minutes and 9 seconds outside the ship. He proved that the way out of the ship into space is possible and the person in a special spacesuit in space can not only exist, but also physically operate and carry out scientific observations.

This is the first time the crew had to - because of the refusal of the propulsion system automatic braking - to take control of the ship itself and put him to Earth in manual mode.

I remember how we met at Baikonur P.Belyaev and O.Leonov after their returning from space. All residents of the Leninsk sity took to the streets. From the checkpoint to the hotel "Cosmonaut" there were people. The cries of "Hurrah!", "Victory", applause accompanied the heroes to the door of the hotel.

I did not think that after 11 years I will work side by side with O.Leonov and other astronauts. Heading Complex prelaunch astronauts at Baikonur, I was directly involved in the preparation for the flight into space 29 Soviet and foreign space crews.

When manned missions "Voskhod" ended, they have many years flew into space, carrying out programs for the benefit of the national economy, science and the Ministry of Defence.

One of these landers for spacecraft "Voskhod", that had been in space, is located in the Department of Aviation and Astronautics NPM. This lander has attracted considerable interest among schoolchildren, students, all museum visitors. After all, you can see, touch, and even sit in the spacecraft burned up in the atmosphere while returning to Earth! So, come, see, get acquainted!

O.Boltenko, Head of Department of Aviation and Astronautics of I.Sikorsky State Polytechnic Museum at NTUU "KPI", the chairman of the Board of Veterans Kiev Baikonur Cosmodrome Baikonur honored test pilot.