Kiev. Astronomical Observatory of Kiev National University. On a visit to the luminaries 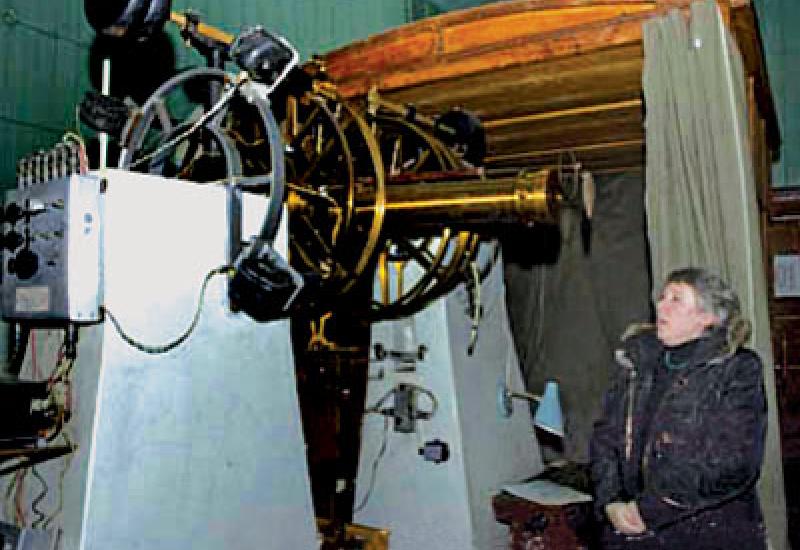 It seems, that in this lost in the modern urban corner of land in Kiev the time has stood still. Giants chestnuts, maples and acacias protect the peace of large and small dome, where there are hidden from the weather hard workers - telescopes. More than 160 years here on the address Observatornaya, 3, there is a window in the vast, mysterious, unidentified universe - Astronomical Observatory of Kiev National University.

It is a scientific institution can without exaggeration be considered at the same time a small museum of profile architecture under the open sky, the memorial, museum of local lore, scientific archives, museum of astronomical instruments and appliances, and at the same time it is a small ecological reserve in the city center. The observatory has long been known as a kind of educational center. All who are interested in one or another astronomical event, who wants with his own eyes to see the heavenly bodies, who are concerned about the age-old problem of space and modern view of the universe, who just really need to know the name of some star, call and come here ...

The main building - an architectural monument of national importance - has been specially designed and built by renowned architect Vikenty Beretta. There were provided the orientation of buildings in the plane of the meridian, as well as deep unconnected with the premises foundations for stationary telescopes, hatches and the rotating part of the dome. Construction was continuing in the 1840-184. Later the pavilions of other structures, including those with shifting roofs, were installed.

For more than 160 years of existence of the observatory within its walls many extraordinary outstanding personalities worked. Until the 30s of the twentieth century the staff of the State Observatory was consisted of only 2-4 employees. But a professor of astronomy and astronomer observer had a European education, academic degrees and extensive experience of scientific and observational work. Thus, the first director of the observatory Vasiliy Fedorovich Fedorov, before been approved in 1838 in the post of the first Kiev professor of astronomy, worked in Dorpat Observatory. In the expedition of the Petersburg Academy of Sciences, one of the first conquered Mount Ararat and determined by astronomical methods its coordinates and height. More than four years he traveled on the Western Siberia with special instruments and determined by the stars the coordinates of the settlements there.

All this and many other interesting and dramatic events at the observatory are stored in the authentic documents, the oldest of which dates from 1832. Scientists especially carefully stored materials of observations. This handwritten journals (all logs for all periods of more than 200, since 1845 are save), sketches, photographs exhibition (unique, it is more than 100 years old), television and video.

There was created the museum on the territory of the observatory. The exhibits are grouped by area of research. The first tool Observatory ordered leading European companies even before the beginning of its construction. The oldest exhibit, which appeared in the Observatory in 1838 - the transit instrument (special telescope). He allows to record the passage of celestial bodies celestial meridian (it turns out, it has long existed Kiev meridian!), that was used by the service time to determine the position of the stars. Later, in 1870, it was found meridian circle - a tool for precise positional observations, which until 1996 was used for regular observations. Now these devices remains the world's only three (out of 41 made). In the CIS these are no more.

In astronomical observatory it was launched a new kind of excursions: for 1.5-2 hours on can learn the history of design and construction of the observatory, life and scientific ways of Kiev astronomers XIX - XX centuries, get the idea of the scientific problems to be solved in the past and today, see the scientific equipment and devices over the years. Moreover, using the instruments (if the weather contribute) one can see in the daytime spots on the sun and its spectrum, and in the evening - the Moon, planets, and other interesting celestial objects. Contact the Lili Viktorovna Kuznetsova tel. 486-26-91 and 486-26-30, all tours are free.

The territory Observatory is a small green oasis, lurking among the attacking from all sides asphalt-concrete jungle city center. Here, there find shelter among a Red herbs hedgehogs, bats, many birds. Brought in the XIX century by one of the great French observer snails crawl through narrow paths leading to the telescope. And historians claim that it was here, on the spur of the Old Kiev mountain, the Prophetic Oleg was buried. Here at every step one can feel the history ...