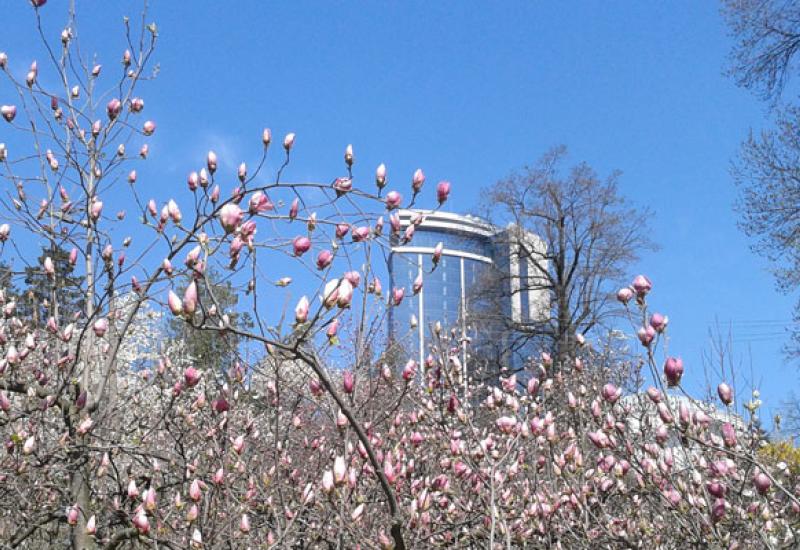 You can verify this by visiting an excursion in Botanical Garden of Fomin, near the metro station "University". By the way, the old-timers remember: on the site of the present entrance to the subway was a delicate arch, and it was the main entrance to the University Botanical Garden. Now this green oasis occupies 22 hectares with its 17 greenhouses and 12 orangeries. His collection consists of 8 thousand plant species, 4 thousand among them - tropical and subtropical.

The decision on the creating in Kiev university of botanical garden was made in 1833, at the time, when the university was also just creating. Then the plants were brought from the Botanical Garden of Volyn Lyceum, disbanded in Kremenets, from Gomel estate of Count Rumyantsev and other flora collections. It was only May 22, 1839 the first rector of the Kiev University of St. Vladimir, Maksimovic, together with the architect Beretti and director of the botanical garden Trautfetter have chosen for garden place a hilly wasteland beyond the future red building where near the river Lybid a cattle was grasing. More or less complete form university garden was taken only in 1852, when the area was fenced.

During the First World War and the Civil War the collection of wildlife with hundreds of plants from around the world, has undergone devastating shellings and raids of motley soldiers. Alexander Fomin, who at that time headed this scientific and educational institution, together with the small group of employees- fanatics by their clothing and blankets covered in beatten out glass greenhouses - despite they have themselves stiffened in extreme cold. Only because of their dedication managed to keep tropical plants, which now 150-200 years. By the way, academician Fomin, whose name is now a garden, lived in the garden house to the end of his life.

The second black wave washed over the botanical garden in the Great Patriotic War. Only part of the equipment and small plants were evacuated. During the occupation the buildings in the Botanical Garden housed military barracks and stables. The Germans cut down for firewood relics, and during the retreat in 1943, removed dozens of palms and orchids. They have taken a very valuable female speciman of Ginkgo biloba, which for decades has slowed reproduction in Kiev these relict trees.

Only in 1974 the city authorities ordered to reconstruct the garden. Drainage system was restored, the relief was planned, new trees were planted. In 1978 the greenhouse complex was built with the highest in the world at that time the 32-meter Klimatron. There are now growing tropical palms such as Livistona from Australia that is growing as much as 30 meters. In winter, it blooms with thousands of yellow-greenish corolla (panicles).

Tall Klimatron - tropical kingdom of Kyiv. There is surprising for its size and unusual forms of palm - yubeya wonderful from Chile. It is more than 150 years old, with the height about 20 m. The trunk has a diameter of more than a meter and is very similar to the foot of a giant elephant. In nature, these plants are almost gone - they were destroyed because of the sweet juice (Aborigines made the vodka from it). In general, a collection of palm trees, numbering 63 species, is unique. Botanical gardens from the countries origines sometimes ask for them.