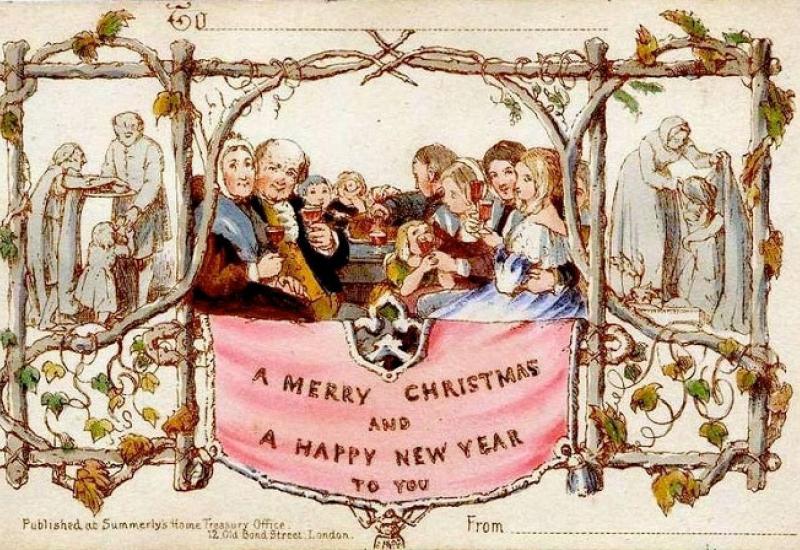 New Year is a joyful and funny holiday, it is hard to imagine without a Christmas paraphernalia: Santa Claus and Snow Maiden, Christmas trees and toys, glasses of champagne, snowflakes, sparkles and greeting cards.

Writing to express love and affection people have learned back then, more or less mastered the script. Egyptians used papyrus scrolls for this. Chinese - special red cards where stated name of the person that be visited by guests, but found the home owner.

At the beginning of the XV century in Europe appears first paper Handmade. In one version, the author was the Duke of Orleans, who addressed his beloved wife work.

Still official birthplace is England postcard. A "father" of Dobson is an artist who in 1794 painted on the occasion of Christmas and winter landscape at the family tree and written on the back and sent greetings to his friend. He was delighted, and a year later, making dozens of lithographs depicting a winter landscape with Christmas Dobson welcomed the now all friends.

First post Christmas card appeared three years after the invention of the postage stamp - in 1843-m. It was released in London only a thousandth edition commissioned by Sir Henry Cole. And the child Cole Puritan society met with indignation, because the table in Figure breaking of bottles, and participants Gala Dinner rozchervonilys of drinking. Cards that insulted religious feelings of believers withdrawn from sale and burned. Survived and survived to this day a little more than ten pieces. Recently collector laid out in one of them even thousands. At an auction in Britain.

In Tsarist Russia "from England" creation accepted gladly. Merchants brought cards without labels, with only a picture. Texts applied separately, once in Russian. Cost card such as outstanding at the time the money. And Russian craftsmen quickly learned to make their own cards. Often they were real works of art - decorated with sparkles, and "snow" from boric acid was difficult to distinguish from the genuine. Soon there were also printed leaflets, artistic composition which created the famous artists and Nikolay Karazin, Konstantin Makovsky, Ilya Repin. Cards inserted into the frame and decorated interiors, ladies decorated their their boxes and albums. No wonder the late nineteenth century called "golden" age cards.

Santa Claus on a rocket

The revolution of 1917 strongly "canceled" Christmas and New Year, and with their cards and even Christmas tree as "bourgeois remnants." Only in 1936 the First Secretary of the CP (B) U Postyshev initiated the revival of Christmas traditions. Christmas cards back, but not with rozhevoschokymy angels and stars of the Kremlin.

Yes, came the Great Patriotic War and the country directed all forces to fight the enemy. Served this noble purpose and Christmas cards. They inspired soldiers and workers of the rear. "New Year's greetings to the heroic defenders of the motherland", "Happy New Year, fellow fighters, commanders and political workers" - those were the Christmas greeting. And then depicted characters, which should follow: Chapaev, Shchors and Kotovskiy. Families of soldiers receive their relatives' Christmas greetings from the front! "... Postwar cards seem to us today and cozy home. They sang a peaceful life, a return to family holidays, white tablecloths and glasses bell. The real heyday of Soviet Christmas cards come in 60 years.

Due to space exploration Santa Claus left a deer sled and moved into the rocket. Also began to fight for world peace. But in the second half of the 80th Christmas cards suddenly disappeared glasses, goblets and generally everything that could somehow reminded of festive feast. This is not surprising: anti-alcohol campaign just gaining momentum.

Well, the cards always carried a campaign unobtrusive depending on the trends of the time. So today differ fair democratic.