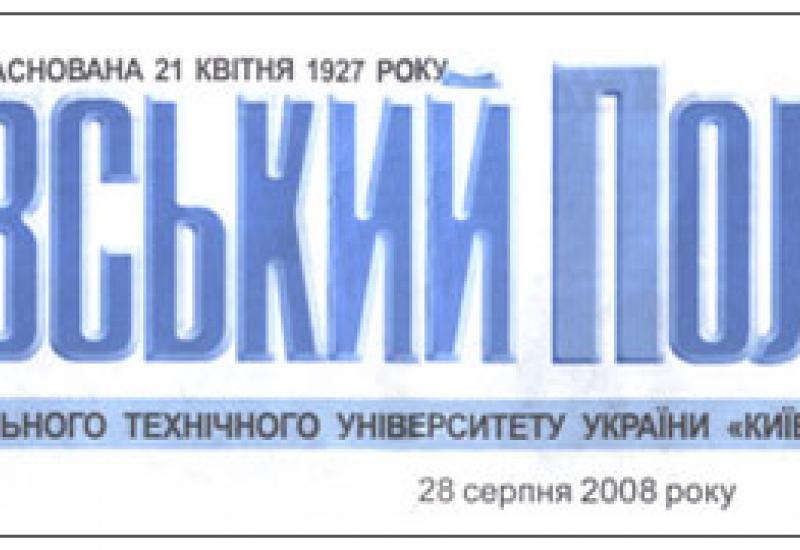 First I came to the editor’s office in 1967, when i was a student of 2nd year acousto-electric faculty. The desire to write articles and better to learn the Ukrainian language I had long ago and this led me came to the editor’s office. I met Boris Samiylovych Mirsky. Silver haired man of small stature, skinny. He kindly greeted me and offered to write some article about student life at the faculty. Since it has been all started.

A little bit later, in the winter the same year after session, I was offered to go on a business trip to Estonia and Latvia in polytechnic Institutes in Tallinn and Riga for training exchange pages. There I left on our exchange material Kyiv Polytechnic Institute and took a lot of material in these institutions. When the page came out, they made a good impression on our community Institutskaya because they were interesting and disclose our partners widely.

Then the editor of the newspaper was Alexander Turenko, Associate Professor of Mining Faculty of Electric Power Engineering and Automatics. However, as the saying goes all work was done by B.S.Myrskyy, who served as executive secretary of the editorial board. The correspondent was Satsyuk Larissa and Luba Guzhva as secretarial support.

I've never forget conversations with Jeanne Alexandrovna Lyanna. At that time she was so called ghost writer- woman of letters, always friendly and kind. She always told me what was correctly wrote and was not, what I had to rewrote or throw out the text. Impressions of these talks I will remember 'til the end of time.

While the newspaper was published 2 times a month (every 2 weeks), and it was justified, because manufacturing process was very complex. Now it’s much easier text is typed on a computer and sent to the printer office through the Internet and the newspaper is ready after a day or two. In those days text was typed on linotype machine, then ousted proofs, and then print. Printing machines were not like now. It was necessary to control the entire printing process.

The special load, I remember, fell to me when the issue was being prepared for the centenary of the birth of V.I. Lenin. It's amazing that I, a fourth-year student, was appointed responsible for the issue of this newspaper. The newspaper came out, everyone was happy. I even received an award for quality preparation of the material. However, the preparation of these materials was very difficult. It was necessary to coordinate the texts with the party committee several times, order so-called clichés for photos, and carry the signal pages of the newspaper into censors and the like. All this happened in a fast rhythm, and it was interesting to work.

For the first time crossed the threshold of the institute's circulation in the mid-1970s, having neither professional experience nor special knowledge - only a desire to try myself in a new business. Thanks to parents and school I was able to combine Ukrainian words so that they sounded melodious and understandable (at that time most of the author's materials had been translated from Russian, and the newspaper was always in Ukrainian-language).

Multifaceted Komsomol youth gave a variety of subjects - from the mandatory ideologically correct Leninist tests, reports, seminars - up stories about the excellent students, leisure, international friendship, youth leaders (in the vast majority of people interesting and caring, who, having experience with people of social work and communication eventually realize themselves in leadership positions), and others. Working as a freelance reporter, gets great pleasure from communicating with peers and senior mentors. And once I read in an editorial laudable line regarding my work, very surprised, because for me the main thing was the process, not the result. But now grateful to colleagues for the warm words: "Quickly and confidently entered the life of the editorial board pupil Faculty of electrical instrument and computing Nadezhda Vdovenko range of her work is extremely varied talented girl resorted concise notes and informative correspondence, fresh, vivid sketches and profound essays... In its material sense of deep creative approach to the topic and knowledge of student life issues. They are also distinguished by the completeness of presentation, emotion, richness, expressive th speech is nice to watch, that the girl -.. in constant creative search Therefore, its materials with interest and looking forward to student readers factory newspaper. "

At that time, the editorial staff was mostly young professionals, all with university education. Retaining their student connections, they maintained contacts with the city media, young writers. The editorial staff visited many guests, freelance writers. How to manage to stay in a small room 216-1, where there were five tables and several cabinets, remains a mystery. Perhaps the phenomenon of "gloves." In a good society, you do not notice any inconvenience.

Zhanna Alexandrivna Ljanna (at that time the executive secretary) created a friendly and creative atmosphere in the team. Many life and domestic problems were discussed and resolved with her participation. With the light hand of Zhanna Alexandrivna and Svetlana Leontieva (direct mentor), she graduated from the faculty of public professions in the CPI with a degree in Journalism, then she got an engineer's diploma and went ... to the research institute.

Again I stepped over the editorial threshold in the second half of the 1990s. There were changes in the state; also it  happened in the editorial office, already occupied two rooms of the former Komsomol committee, in the middle - a huge table with the party committee and comfortable chairs, light, spacious. And the staff, headed by Oleg Veniaminovich Lukyanov, the musketeer of our days, in which surprisingly romanticism combined with pragmatism against the backdrop of an endless admiration for regional studies, managed to preserve the main thing - the "editorial spirit", as we call it a joke. It manifests itself not only in a benevolent and creative atmosphere, but also in responsibility and honesty towards those whose business we continue, and those who will come after us. The nineties are the period of the bright flowering of freedom of speech in the state, the institute and the newspaper of particular.

I always admire and down before the veterans: they work very professionally, efficiently, reliably and ... beautifully. I remember that at the celebration of the 100th anniversary of the CPI in the "Ukraine" palace, an upbeat mood reigned, no one thought about work. Only YN Moskalenko, our constant "chronicler" during the last 15 years, having put a piece of paper on his knee, wrote down the names of the speakers and the theses of their speeches in pencil to prepare a report tomorrow. To my astonished look (after all, according to the rank, I should be engaged in this, junior employee): "We should always have our own material."

In the editorial office, fate presented another meeting. Yevgeny Aleksandrovich Korshenko (professor of the PF, once worked as a scientific secretary of the KPI, headed the editorial board, created the State Polytechnic Museum, etc.) never pronounced slogans and did not call for accomplishments, did not raise votes. He worked everyday and almost imperceptibly, he found non-standard solutions, did it brilliantly, interestingly and creatively, as every case is the most important in life. It was from him that he learned to prepare materials so that then there was no need to correct or check something.

New Age. New management. The editorial policy has changed. So, probably, it should be. Time is continuous.

Almost every year, new students from the Institute of Information Technologies come to the team - dazzlingly beautiful (as for selection), cheerful, perky. And there you look - in about five years and the candidate's ready. And they are already addressing them by their first name and patronymic. I want to believe that the coal from the fire, which is called the newspaper "Kyiv Polytechnic", warms their hearts a little, as it warms and inspires the veterans.

In 1989, when radical changes began in our society, I was elected to the last party committee of the KPI. It was then from the party committee that I was instructed to carry out the duties of the public editor of  KP, which I did for almost 10 years. In those years, the experienced and wise Zhanna Alexandrivna Lianna headed the newspaper. The events of those times, of course, were reflected in our multiparty line.

Suffice it to recall the publication of the programs of candidates for the post of rector, who was democratically elected at the general meeting of the work collective, or the candidates for election as deputies of the Verkhovna Rada, materials on the current political situation, when, at our request, Yu. V. Gnatkevich explained the program of the Movement, The 1st Congress of Rukh with the consent of the administration and the Party Committee was held in the assembly hall of our university. In the newspaper's editors, it was then possible to meet foreign guests - Roman Voronka, Valentina Moroz, Ivan Shepelyakivtsya and other personalities whose social and political activities contributed to the independence of Ukraine.

Subsequently, a new wave of qualified journalists was formed in the editorial office: Olga Gergel, Antonina Kachanova, Konstantin Parishkura, Elena Levchuk, Andrei Okhrimovich, now presenter at the TV channel "what will be next", later - Oleg Lukyanov.

Their journalistic activities contributed to the formation of the world outlook of employees and students, fully corresponded to the then challenges of public and political life and, at the same time, contributed to the preservation of the traditions acquired by Kyiv Polytechnics over the 100-year history of its existence. At the same time, the problems of student and trade union life found their adequate reflection in the newspaper.

When, unfortunately, Zh. O.Lyanna left life in 1996, the newspaper continued the traditions laid down by its predecessors, but the emphasis in submitting materials shifted towards covering the problems of the life of the university, its scientific, international, educational activities, and the like. It is difficult to overestimate the attention paid by the University's rector to the newspaper, especially its rector MZZgurovsky.

The giving of the presentation of materials, the new format and the design of the newspaper happened in recent years during the editorial period of VV Yankovy. The success of the newspaper's staff, headed by Vladimir Vasilievich, is also witnessed by an external evaluation, when in 2002 the newspaper became the winner of the All-Ukrainian Media Contest "Golden Pen" in the nomination "The Best Newspaper of Higher Educational Establishments of Ukraine".

From the old times they remained loyal supporters of the newspaper, actively cooperate with it, member of corr. NAS of Ukraine DF Chernega, Professor VS Kovalenko, N.O.Virchenko, Associate Professor IO Mikulonok, for which they are our special thanks.