The development of "green energy" can no longer be stopped 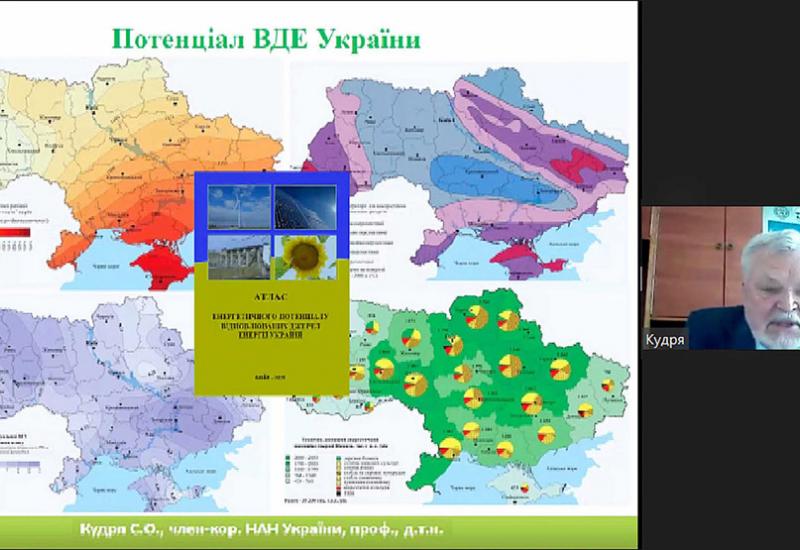 The opinion expressed in the title was mentioned in several speeches of the participants of the opening of the XXII International Scientific and Practical Conference "Renewable Energy and Energy Efficiency in the XXI Century", dedicated to the 30th anniversary of Ukraine's independence. And not only expressed, but also illustrated by numbers, because over the past 5 years, the share of "green" energy in the overall energy balance of our country has almost doubled.

The conference was held on May 20 and 21 on the basis of Igor Sikorsky Kyiv Polytechnic Institute. Due to the COVID-19 pandemic, it worked online, but, as the moderator of its first plenary session noted, the director of the Institute of Renewable Energy of the National Academy of Sciences of Ukraine, scientific director of the Department of Renewable Energy Sources of the Faculty of Electric Power Engineering and Automatics of Igor Sikorsky Kyiv Polytechnic Institute, Corresponding Member of the National Academy of Sciences of Ukraine Stepan Kudria, on the one hand, working remotely is bad, but on the other hand, the conference was attended by much more people than usual - just over 250 scientists and young researchers from the Small Academy of Sciences. Scientists from Norway, Germany, Poland, Uzbekistan and, of course, Ukraine made reports.

About how important this topic is in the work of the Igor Sikorsky Kyiv Polytechnic Institute, Rector of the University Michael Zgurovsky reminded the conference participants in his welcoming speech: "For us, the development of green energy is an extremely important matter. Back in 1979, when in the Soviet Union energy was developed mainly from fossil fuels with the exception of a small share of hydropower, no one could have thought that we should be engaged in some non-traditional areas. They were even considered exotic. And here we have to pay tribute to the foresight of our then rector, the famous scientist in the field of energy Grigorii Ivanovych Denysenko and his school, whose research laid the foundations for the use of renewable energy sources (RES) in our country. Some of the participants in this conference are his students. Stepan Oleksandrovych Kudria continued work of his teacher and now consolidates around his research a large number of like-minded people, specialists, scientists and teachers. Based on the trends in the development of RES, in 2002 we opened the Department of Renewable Energy Sources, we work very closely with the Institute of Renewable Energy of the National Academy of Sciences of Ukraine. Almost the same team works in these two structures… “
Konstantyn Hura, Acting Chairman of the State Agency for Energy Efficiency and Energy Saving of Ukraine, congratulated the scientists. The whole world has chosen the "green" path of development. The whole world is working on decarbonization. And in this context, the development of science, the development of research, new ideas, new projects - this is what stimulates the progress that Ukraine desperately needs, - he said. - "Green energy" is the sphere which continues the development despite all crisis conditions. Even last year, "green energy" was the sector that continued to attract investment into Ukraine's economy: 1.2 billion euros came to our "green" projects last year… Let's say the total potential for gas replacement by bioenergy is 25 billion cubic meters of gas per year. The potential for the development of hydrogen energy is also enormous. Ukraine is a partner of the EU in the development of hydrogen technologies, and this is a potential huge investment. “

Mateusz Bialas, Acting Director of the Polish Academy of Sciences in Kyiv, which has traditionally been one of the co-organizers of the conference, said that increasing the share of energy received from RES cannot be achieved without effective cooperation between scientists working at universities and research organizations from different countries, including Poland and Ukraine.

It is clear that the participants of the conference in sections considered specific issues. The general direction and tone of these discussions was to some extent set by Stepan Kudria's report "The state and prospects of development of renewable and hydrogen energy in Ukraine", which opened the first plenary session of the conference. At the beginning, the speaker reminded of two of the seventeen Sustainable Development Goals, which were formulated at the UN Summit on Sustainable Development in 2015, and which directly affected many participants, mostly representing not only enterprises and research organizations, but also universities - "High-quality Education” and "Renewable energy". Ukrainian scientists, in his opinion, tried to combine these two areas in a way that allows you to get the best results. This is reflected in the structure of the Institute of Renewable Energy of the National Academy of Sciences of Ukraine with its educational and scientific departments, and in the activities of the department at Igor Sikorsky Kyiv Polytechnic Institute.

If we consider these goals separately, the results of the Department of Renewable Energy Sources are the confirmation of hard work to ensure quality education. During its existence, it has educated 264 bachelors, 93 specialists and 108 masters, 5 candidate and 2 doctoral dissertations have been prepared, specialized educational and scientific laboratories have been opened, including with the active organizational and financial participation of Polish partners. It should be added that even at this conference there was a separate youth section, where students from the Small Academy of Sciences presented their reports (read more about their work in the article "The youngest participants of the conference on renewable energy and their reports").

As for the movement towards the second goal, the statistics provided by Stepan Kudria are a clear evidence of progress on this path: "Ukraine has already made great strides in the development of renewable energy. Today we have 8.5 GW of electricity from renewable sources. If we are to convert this number into NPP units, then 8 units generate as much. The development of "green energy" can no longer be stopped. It will only evolve. Both nuclear power plants and thermal power plants are already connected to these processes. What we have only recently dreamed of is already becoming a reality. “ So, if in Ukraine in 2015 the share of RES in electricity production was 5%, in 2020 it reached 9.2%, in 2025 it should be 13.1%, and in 2035 – 20.3%.

But RES is not only electricity generation, although it has been developing especially rapidly over the last two years. And although the situation is slightly worse in terms of thermal energy and transport, everything is gradually levelling off there as well, so it is planned that the total amount of energy received in Ukraine from renewable sources will be 35% by 2035.

Renewable energy sources are quite diverse, so the topics of the conference sections and reports on them were related to solving problems of wind energy, solar energy, biomass energy, hydropower, geothermal energy, hydrogen energy, environmental energy (heat pumps) and more. For example, a separate section was devoted to the successes and challenges facing the development of very promising hydrogen energy, it addressed both general issues of using hydrogen as an energy source and obtaining "green" (or renewable) hydrogen for energy and other needs.

By the way, the powerful development of renewable energy in recent years has created a problem that few thought about a few years ago. Among others, Konrad Shvirski, a professor at the Institute of Heat Power Engineering of the Warsaw Polytechnic, drew attention to it. He noted that if the current rate of decarbonisation is maintained, in about 20 years Europe will no longer need to train specialists in universities to work in "classical", based on the use of fossil fuels, energetics, so this should be taken into account when developing educational programs for future energy engineers. However, the main issue he raised in his report was to justify the possibility of solving many environmental and economic problems in Poland by building and using offshore wind farms.

In general, the topics of the conference reports were very diverse. Interest in it from scientists, government officials and practitioners is understandable: the wider introduction of RES technologies is indeed able to overcome many of the problems of environmental improvement and energy efficiency that have accumulated over the years. Therefore, it is time not only to outline the strategy and key tasks to be solved in the process of energy transition, ie the complete abandonment of fossil energy sources, but also to work on specific projects and tasks. Most of the reports at the section meetings were devoted to them. We will not list them, as they mostly concerned very special issues.

Finally, the conference participants adopted a resolution outlining a number of tasks that need to be addressed as a matter of priority, and a list of the most promising areas of research that will soon determine trends in the industry.