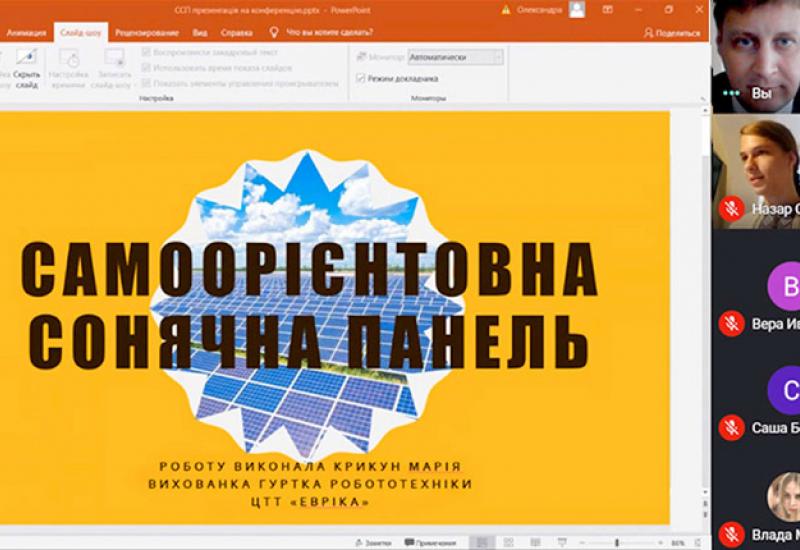 Within the framework of the XXII International Scientific and Practical Conference "Renewable Energy and Energy Efficiency in the XXI Century", dedicated to the 30th anniversary of Ukraine's independence, which took place on May 20-21, 2021 in Igor Sikorsky Kyiv Polytechnic Institute, the 5th meeting of the Youth Section of SAS participants and young scientists took place in an online video format on the basis of the Ukrainian-Polish Centre for Development of Renewable Energy Sources and Energy Efficiency of the Department of Renewable Energy Sources of the Faculty of Electric Power Engineering and Automatics

The scientific supervisor of the VDE department, Corresponding Member of the NAS of Ukraine, Professor, Director of the Institute of Renewable Energy of the NAS of Ukraine Stepan Kudrya, made a welcoming speech to the young scientists, he wished them success on the thorny path of scientific research, inspiration and the pursuit of new achievements. Tetiana Peshcherina, Deputy Director for Educational Work of the SAS of Ukraine, addressed the young researchers with a welcoming speech. She also sincerely thanked the organizers of the conference for five years of fruitful cooperation with the SAS and for the support of talented students.

The reports of the youngest participants of the conference were based not only on theoretical but also on practical research in the field of renewable energy and energy efficiency. Practically all materials were collectively discussed by the participants of the meeting in a "Q and A" format.

I would like to note some of the work of students who have carried out significant scientific and practical work, which allowed to obtain good results. First of all, this is the work of the representative of the Boryspil Centre for Technical Creativity "Eureka" Mariia Krykun (under the guidance of Olexii Yevgenovych Rengevych) on the topic "Self-oriented solar panel". The study was aimed at improving the efficiency of solar energy by developing a solar monitoring system, which increased the selection of maximum power from the photovoltaic system and, consequently, increase electricity generation when working on the consumer.

Interesting from the point of view of environmental protection and development of new building materials is the work of the representative of the Myronivka Centre for Children and Youth Yaroslava Martynenko on "Prospects for making sandwich panels from textile products" (under the guidance of Valentyna Paryshkura).

It explores the possibility of using used textiles for the production of sandwich panels, which can then be effectively used in construction. It is shown that the technical characteristics of the proposed panels are almost not inferior to the classic. During the discussion of this work, its importance was noted, as well as possible areas in which research can enhance the significance of the results.

The work of Nazar Serhiyenko, a representative of Kremenchug Lyceum №4 "Kremin" on the topic "Prospects for obtaining biofuel from phytomass of miscanthus" (supervisors - Natalia Ledneva and Serhiy Digtyar) was interesting and meaningful in terms of depth of research. It found that the addition of chicken manure to miscanthus during obtaining biogas can increase its yield. During the discussion, the possibilities of expanding the range of coenzymes were noted, which will allow to use chicken slaughterhouse waste in the biogas production process and decrease production waste.

In total, more than 40 schoolchildren and young scientists from Zakarpattia, Donetsk, Poltava, Luhansk, Odesa, Dnipropetrovsk, Khmelnytsky and Kyiv regions, as well as the city of Kyiv sent the results of their research to the Youth Section of the conference.

After the end of the conference of the youth section, the moderator noted the great work done by all the authors of the presented reports. He also expressed special gratitude to the teachers-mentors for encouraging and stimulating talented young people to research. Participants of the Youth Section of the conference were awarded certificates for participating in the event.

Vasyl Budko, Doctor of Technical Sciences, Head of the Department of VDE, FEA